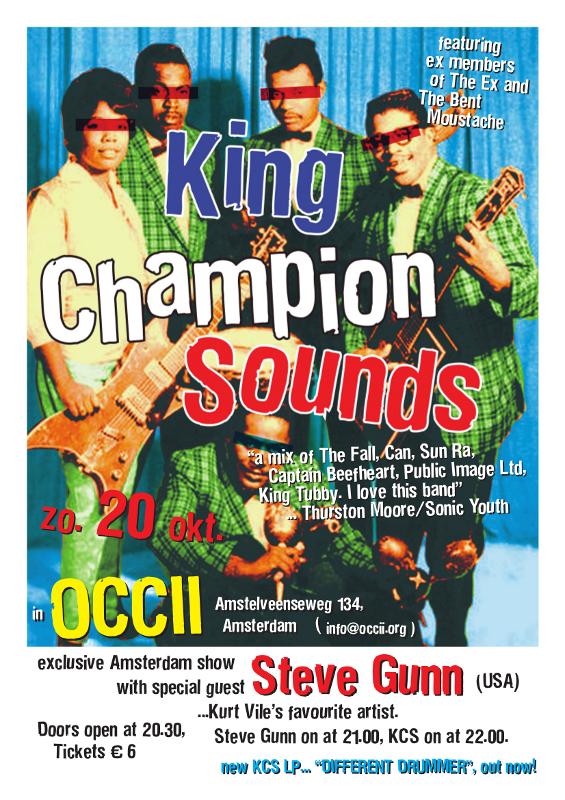 Everybody is a potential drum in as much as they have their own heartbeat; of course once their heart stops beating, they stop swinging. Some people can’t stand any rhythm or beats other than their own; these are people whose tuning is off in some kind of way. It seems that anybody with their own heartbeat should be compatible to rhythm, period.

If a man does not keep pace with his companions, perhaps it is because he hears a different drummer. Let him step to the music he hears, however measured or far away.

They sound like the primordial ooze that birthed touchstones like the Stooges and the Velvets come to life, nursing a mutha of a hangover, and a grudge. They sound like a group of 5 marauding musicians who locked hard into a groove and gave the 6th fellow the chance to grab the mic and spew out his laser guided lyrics.  As on record as live. this band are something to behold.

King Champion Sounds came to life after being asked to open for Mike Watt at the start of 2013. Ajay (Donkey / The Bent Moustache) picked up the challenge of opening for a musical inspiration (and friend) and wrote an entirely new set of songs for a one-off show. Recruiting GW Sok (lyrics commandante and ex The Ex vocalist), Oli (Shrug / year Of Birds), Mees (a 17 year old wunderkind drummer) and a horn section featuring ol’ school jazzers Ditmer and Chris, the band set about a period of intensive rehearsals and culminated in a show that received acclaim from a packed venue and from Watt and his cohorts as well. The gauntlet was thrown for better things, and duly taken by the band. More well received shows were played and an album has been recorded titled “Different Drummer” (to be released on Monday 14 October). These tracks reached the ears of Yeah Yeah Yeahs, who insisted on KCS opening for them at a sold out show at the Paradiso in July.

October 2013 sees the release of the debut album (“Different Drummer” will be released on the band’s own label Wormer Bros.) and 13 shows in 13 days taking in the Netherlands, Belgium, and the UK.

Touching on the jams created by The Fall, Can, Sun Ra, Captain Beefheart, Public Image Limited, King Tubby, this band will set your pulse racing. Don’t miss out!!! 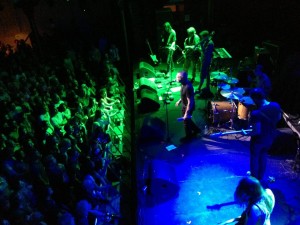 King Champion Sounds
First album will be out in October,
combined with a tour in Holland, Belgium and the UK.

It’s impossible to just talk about Steve. He’s too good! He’s so good, just listen to him. (…) I just want to listen to him. (…) Just from growing up with “roots music” (so to speak) and just kind of immediately seeing something that was real and totally pure, no gimmicks. Add to that a solid vocal and some melodies with traces of folk and the delta blues, sure, but also, I dunno, like the Meat Puppets maybe. But he takes it further, and on his own terms, and all the while it sounds old, and new, and timeless. Dude’s a head, what can I say? It made me want to be a part of it myself.
Kurt Vile, for Pitchfork Magazine

His 2009 solo masterpiece, Boerum Palace, saw him exploring slow ballads, simply-strummed ditties, lengthy raga/ psych hybrids, twangy country meditations and sprightly bluegrass-inflected jaunts.
Gunn’s deft diversity continues on Sand City, his 2010 duo record with drummer John Trucsinski. Over the course of four tracks, the pair revels in jams that all have a searching, mountain-climbing quality. It’s as if when each track starts, they have a summit in their sights and the knowledge that all it takes to get there is the right chords and rhythms. Gunn hits the target every time, from his winding, snake-charming acoustic plucks that weave around Truscinki’s beat on “Takism II” to the cascading electric circles he runs during the dizzying “Wythe Raag.” This means it’s anyone’s guess what he’ll play when he performs, but you can bet it will still sound like Steve Gunn.
Marc Masters