KNALPOT “An explosive blend of Radiohead, Clark and Squarepusher”
With electro, dub, post-rock, ambient and jazz as its main pillars, KNALPOT’s sound always remains an utterly hybrid mix of many genres. In concerts they keep reinterpreting their compositions with their very own and virtuoso way of multitasking between bass, guitar, casios, drums and big amounts of analogue electronics, creating sonic whirlwinds that alternate with whispery-soft sections. The austrian/french/german duo operates from their home-base Amsterdam and has reached the status of one the Netherlands most exciting live-bands since the release of their debut-release Serious Outtakes. 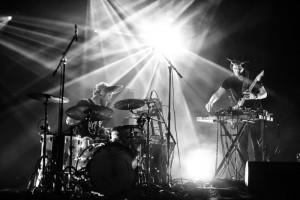 + Tai Ming (Aardvarck) & DJ Christmas Card
Over 30 years, Tai Ming aka Aardvarck (Rednose Distrikt, Amsterdam) has built up a solid reputation of uncompromising quality and versatility in the European dance scene, both underground and above. From Soul, Jazz, Electronica, Hip Hop, R&B, Pop & New Wave in the early 80s up to the present he’s been in the avant garde of all major dance styles. This super freestyle deluxe selector pick’s the essence off many styles, combine and plays them in a perfect timing.