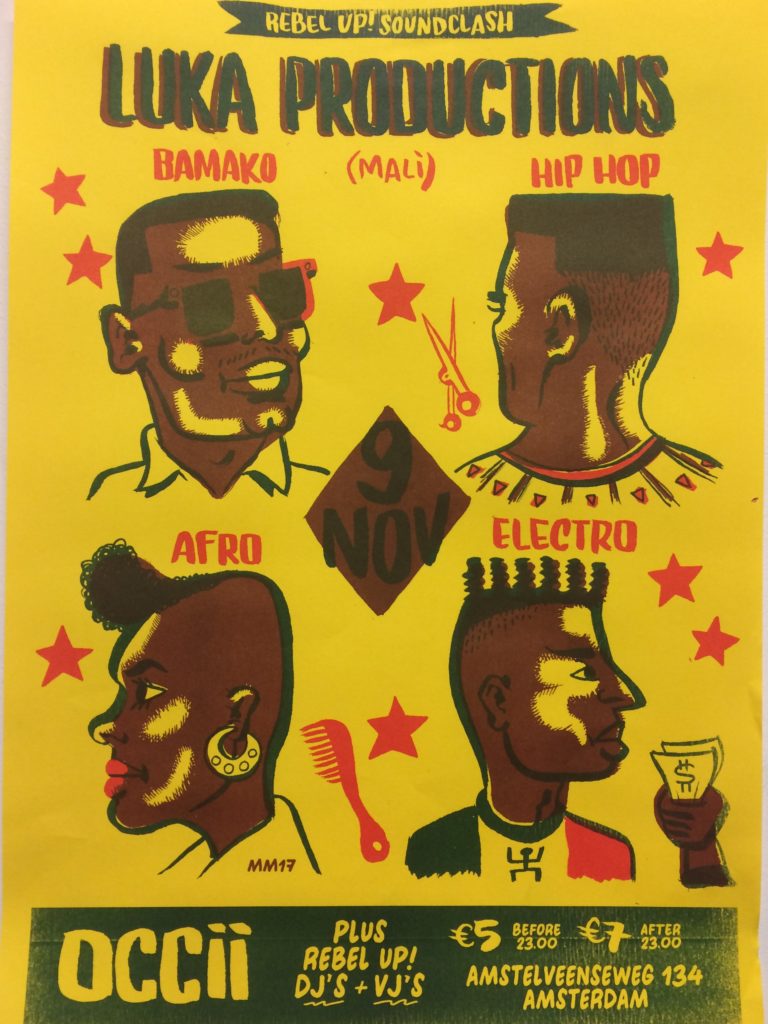 Luka Productions is Luka Guindo, rapper, producer, and multi-instrumentalist and one of the most sought after producers of contemporary Malian Hip Hop. Working from a small bedroom sized studio alongside a busy street in the Malian capital city, Luka has built a reputation as one of the most prodigious beatmakers. Working with artists such as Supreme Talent Show, Ami Yerewolo, Iba One, Van Baxy, and Sidiki Diabate, LukaProductions is a household name in Bamako’s Hip Hop scene.

In the past decade, Hip Hop in Bamako has exploded, and risen to the defining music of the youth, much of it modeled on Western imports. Luka Production’s however makes Hip Hop that is distincly Malian. Luka is known for his ethos of maintainting a place for traditional instrumentation, and reclaimaining the genre as a uniquely local style. In esoteric compositions of Kora and Balafon, layered over software percussion, flute, horns, and synthesizer, Luka’s tracks draw on the rich musical history of Mali, bringing the village life into the modern world.

In 2016, he released his first international debut, Mali Kady: high energy Hip Hop, with lighting fast rapping, driving percussion, and balafon dance tracks. His 2017 release Fasokan (Sahel Sounds), went in a different direction. Inspired by the minimal electronic compositions of Craig Leon, Fasokan is a guided meditation; spoken verse guides the listener through the trials of the modern age, set to the backdrop of sweeping electronics and hypnotic dreamscapes.

New age music from West Africa. Lush and hypnotic dreamscapes combine traditional instrumentation with sweeping electronics, field recordings, and soothing affirmations. Bamako based composer Luka Productions delves into avant-griot, transforming ancient music into the 21st century. The songs are meditative and sage, as voices guide the listener through ways of living, from the village life to the modern world. Inspired from early electronic music, library records, and new age, this is easily one of the most left field recordings to ever come out of Mali. In Bambara.

BACKGROUND
“Luka Productions” is based in a small studio off a busy street in the capital of Bamako. A repurposed boutique, there are two small couches framing the the computer and console of studio engineer, rapper, and producer Luka Guindo. One of the most sought after producers in Bamako, he has worked with Supreme Talent Show, Ami Yerewolo, Iba One, Van Baxy, and many more. Luka is self taught and PC based (cubase, reason, and fruityloops), one of many producers/studio owners that create all the hip hop produced in Bamako. Every composer has singular style. Luka relies on melodies – he plays piano in the local church – that mimic the vocals, complementing one another. The drums are heavy and punchy, and pitch bended keys solo over the distinctive and improvisational rhythms. He often adds cut up djembe and balafon to the mix to give a local touch, which are sampled though not in the studio, but packaged in a Native Instruments plugin (the website seems aimed at Western audiences, unbeknownst that their product is probably used more in West Africa).

In 2015, I had the opportunity to work Uchronia, producing a series of collaborative “fake” ethnographies (or ethnographic forgeries). In studio with Luka Guindo, we listened and discussed mp3s of various ambient music, including Jorge Reyes and Craig Leon’s Nommos. Released in 1981, Nommos is based around the “Dogon creation myth” – which struck a particular note, as Luka is from the Dogon tribe. One of the more interesting recordings from the project, here titled “Terriya” was modeled on these examples. The resultant track was mixed into a field recording and conjured scene: a stressed out Bamako taxi driver, gridlocked in stifling humidity of the fast growing riverside metropolis, concentrating on the soothing voice on the cassette.

Following the project, I proposed to Luka to make a full album of recordings based around this idea. The resulting tracks are inspired, but wholly original. Lush and hypnotic dreamscapes combine traditional instrumentation with sweeping electronics, field recordings, and soothing affirmations in these original compositions. Cut up Kora and Balafon are layered over software percussion, flute, horns, and synthesizer. They are at once familiar to Mali, lying between the measured griot speaking over a looping melody to the the verbal wordplay of contemporary Bamako Hip Hop. Meditative and cosmic, Fasokan guides the listener through ways of living, from the village life into the modern world.

This is one of the most left field recordings to ever come out of Mali. If Sahel Sounds has emerged with a hands off approach, recording as a fly on the wall, Fasokan is a radical departure. The album is both an original creation and an cross-cultural experiment, drawing inspiration from a new globality of influence: hip hop, new age music, early electronic compositions, and library records. The result is a strange hybrid, wholly unique in sound.
Luka says there has been a curious reaction to the songs: when he’s working in the studio, a nexus of Bamako Rap scene, many of the musicians and emcees are asking for copies of the tracks. Fasokan finds very much home in Mali, at once strikingly familiar. The guest lyrics all tackle contemporary subjects and problems in Malian society: friendship, marriage, religion, and female circumcision. While Fasokan may not be understood by non-Bambara speakers, the sentiment is carried through the music, a looping melody, offering sage advice for a new world.

RebelUp SebCat; “amazing subtle album of afro-electronic moods, between the city & the bush. Modern Malian music from the young generation like you never heard…”