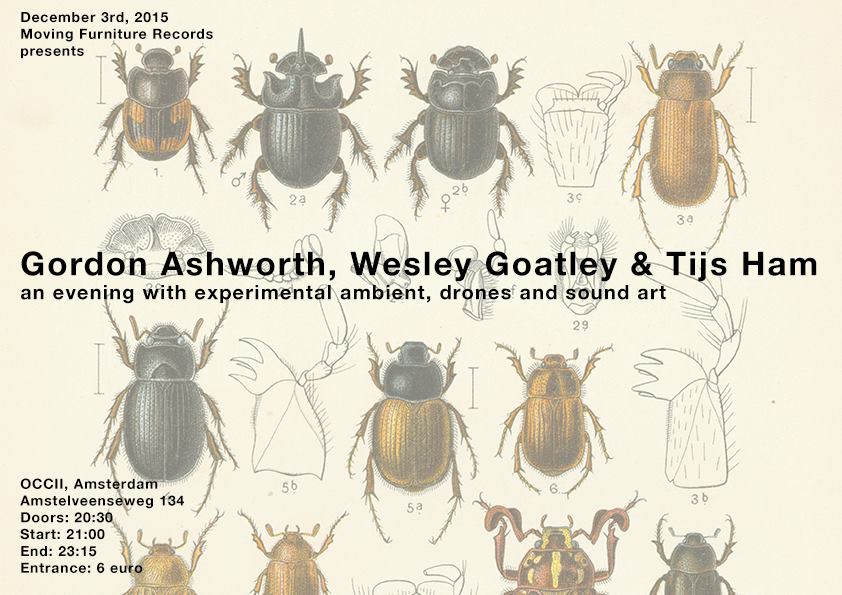 GORDON ASHWORTH (US)
American experimental musician Gordon Ashworth will begin an extensive tour of Europe in Stockholm on September 24, 2015, covering most of mainland Europe and ending in Utrecht on December 6th. Ashworth is known for his work under the names Concern, Oscillating Innards, and is a member of the black metal band Knelt Rote. He is also the brother of Owen Ashworth (Advance Base, Casiotone for the Painfully Alone). This tour will be his sixth time touring Europe as a solo musician and is an entirely D.I.Y. endeavour.

Gordon’s musical projects have ranged from extreme harsh noise and grindcore to minimalist drone, but the music now released under his real name explores the relationships between experimental sound art and differing forms of folk and string music. A new EP of acoustic-based experimental compositions titled “The One You Love and Cannot Trust” will be released on his own imprint, Iatrogenesis, on September 11th. It is the continuation of a style established on the album “S.T.L.A” (Orindal Records, 2014), combining elements of drone, musique concrete, and primitive, emotional abstractions of American folk and modern classical music. “The One You Love and Cannot Trust” digs deeper into interpretations of American, Greek and African melodies, utilizing stringed instruments, tape manipulation and field recordings to create distinct emotional environments.

Ashworth’s current live performance is an extension of these elements, incorporating a wealth of field recordings collected over years of touring, travelling and working as a night-shift taxi driver. He will be travelling entirely by public transportation. Gordon is also head of the archival vinyl label Olvido (in collaboration with Mississippi Records) and a volunteer at KBOO community radio in Portland, Oregon.

TIJS HAM (NL)
In his artworks Tijs Ham (1981) applies programming, live-electronics techniques and system design to explore and expand the possibilities of audible expression. Inspired by artificial intelligence, chaos, evolutionary processes and machine learning he applies these approaches to create dynamic structures and experiment with their aesthetic results.

Three Mixers
Three Mixers is a performance where chaotic sound, analog feedback mixers and digitally manipulated sounds come together. The instrument is a half manipulated, half autonomous machine which investigates questions of control within the performance. The project ‘Three Mixers’ is supported by Stimuleringsfonds E-Cultuur and developed at STEIM & BEK in collaboration with Sybren Danz.

Moving Furniture Records releases music by musicians in the field of experimental electronic music.
We also organize shows for musicians.
We also help musicians getting in contact with bookers in The Netherlands
https://www.facebook.com/Moving.Furniture.Records