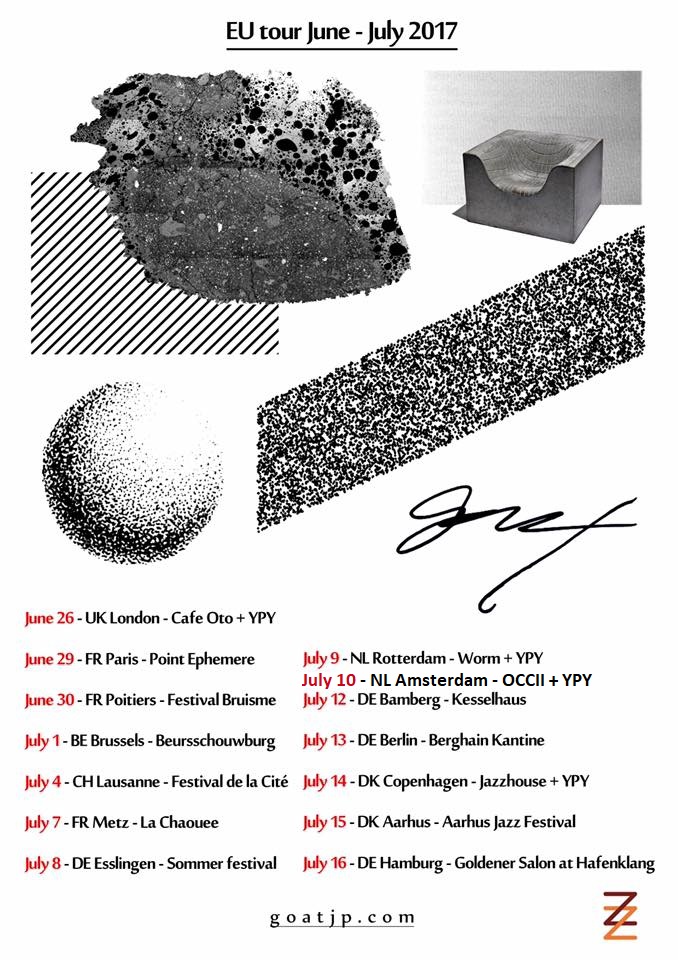 Goat, previously comprised of guitar, bass, drums and saxophone, create music unlike many rock bands. In their percussive songs, they mute the melodic instruments to reinforce the beat, and make frequent use of harmonics played outside the twelve-tone. After going through a reshape in early 2017 with a new lineup, they have moved on to build compositions that explore rhythmic aspect even further, centering on intertwining patterns of repetitive rhythms. So far, they have released two albums from the label HEADZ; their debut album “NEW GAMES” in 2013, and second album “Rhythm & Sound” in 2015.

YPY (EM Records) is a solo project by an Osaka-based musician Koshiro Hino who also plays a central role in the bands Goat and Bonanzas. The compositions he produce for the bands are marked by the frequent use of muted sounds and overtones, while actively employing the sounds that are not part of the standard chromatic scale. Its primitive feel gets often referred to the current techno scene and was credited for achieving a new original style by elaborately synthesizing experimental and dance music.
His wide-ranging solo works consist a pinch of humor added on top of the musical style he has established in the bands. Today, he is acclaimed as one of the prime emerging talents in Japan, and has been appointed to support the acts of artists as Arto Lindsay, Shackleton, Cut Hands, SURGEON, and D/P/I.

PeeQuu –
planet Tozzz’ orbit has aligned with yet another odd constellation in space,
which came first: the synth or the tape?