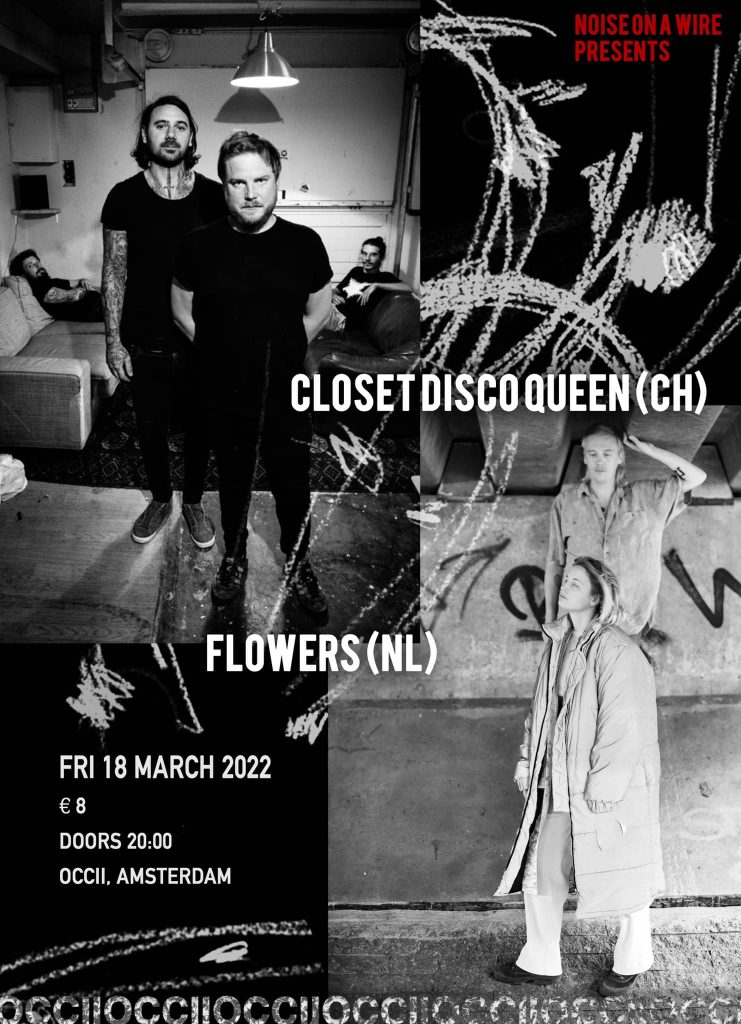 Closet Disco Queen & the Flying Raclettes are an extended version of the instrumental duo Closet Disco Queen (Luc and Jona from the hardcore/noise band Coilguns). They make a kind of instrumental seventies rock music with lots of riffs and psychedelic and jazzy influences. The band is inspired by bands as The Mars Volta, Breach, The Hives and Goat.

Closet Disco Queen started in 2014 when Coilguns was on hiatus. The two piece band released a studio album, two ep’s and a live album. They toured in Europe, China, Russia, Australia and New Zealand. They were support for Baroness in 2016 and Red Fang in 2017. They played on Desert Fest, both in London and Berlin, and at several Swiss Festivals. In August 2021 The Flying Raclettes (Kevin from Coilguns and Chadi from the Luzern Jazz School) joined Closet Disco Queen and they presented themselves at Palp Festival (Switzerland). In September 2021 they released their first full album: Omelette du Fromage.

Omelette du Fromage is an organic yet powerful piece of instrumental loud rock music. The album was written, recorded, mixed and mastered within 20 days by the band itself. Closet Disco Queen got the opportunity to live in the tiny mountain village of Bruson and got access to an abandoned school where the band built a DIY mobile studio. The album is released on vinyl and CD on Swiss record label Hummus Records. Vinyl limited edition hand cut on Laser Discs 50 copies of the vinyl have been hand cut by Grand Voyage Records in Sion (Switzerland) on real laser discs.

Flowers consists of guitarist and vocalist Roos Pollmann from Amsterdam and drummer Joris Frowein from Rotterdam. Stripped down and straightforward, this band isn’t as sweet as their name may suggest. Concocting a witchy brew of doom and stoner rock, their music weaves its web subtly before sending listeners plummeting into crashing, discordant depths of sound. Their influences spread over time from Black Sabbath to Sleep to Boris to Black Moth, and their production purposefully masks their modern origins. Elements of krautrock also join the party to provide a welcome counterbalance of pacing. With a moniker that comes from the Earth and a sound that screams from the depths. In May 2021 Flowers gave a successful show at post rock festival Dunk! (online) at Art Centre Vooruit, Ghent Belgium.

Flowers released a self titled EP early 2018 (Luik Records, Subroutine Records) and in 2019 they released their first album called Doom City (Luik Records, Meduse MagiQ). Doom City is a concept album about a decaying, industrial, deserted, isolated place in an empty, resourceless desert. The city is a metaphor for unsustainable systems/situations that would be better to let go of – let it be destroyed to make place for something better. For FLOWERS this unsustainable system is the binary gender system – it’s struggling to survive, it has to perish to make place for a new and better way.

Closet Disco Queen & the Flying Raclettes, FLOWERS
Bookings are closed for this event. 100 tickets will be sold at the door
Posted in Rock