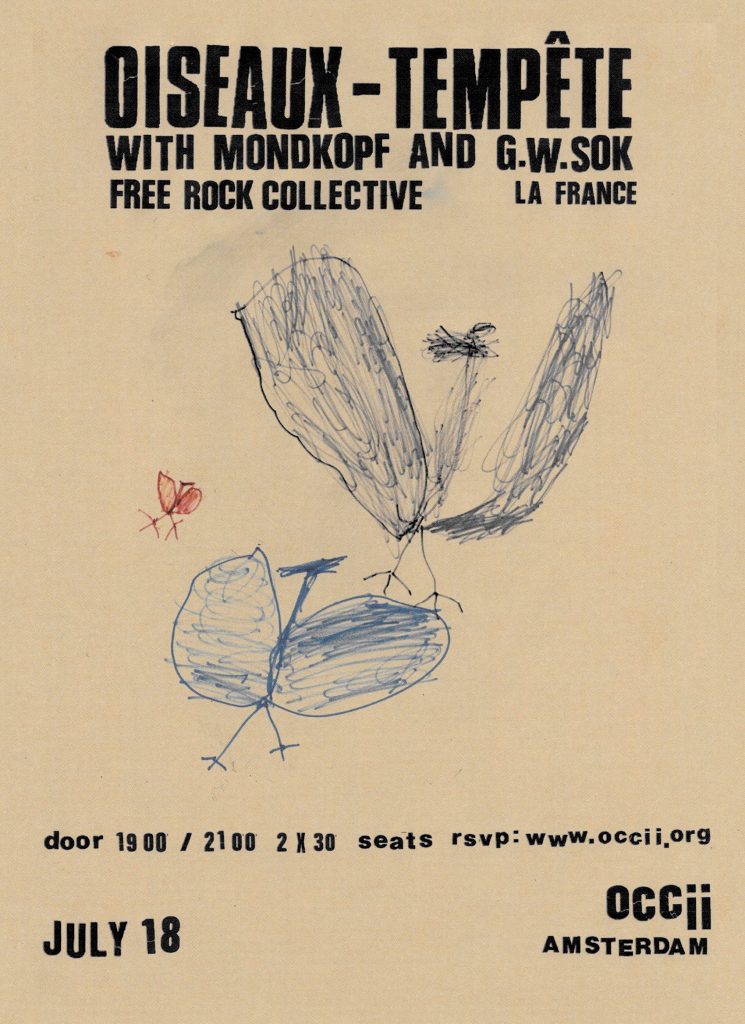 The music of improvisational collective Oiseaux-Tempête is bred from places in turmoil, be it Greece, Turkey or Lebanon. Oiseaux-Tempête embraces the freedom of improvisation, as well as the communal function of collaboration.
This is secular music that crosses boundaries and cultures, embodying an intersection where post-rock, jazz, Arabic music, punk and experimental electronic music find common ground and refuge.

G.W. SOK, Mondkopf, OISEAUX-TEMPÊTE
Bookings are closed for this event. 50 tickets will be sold at the door 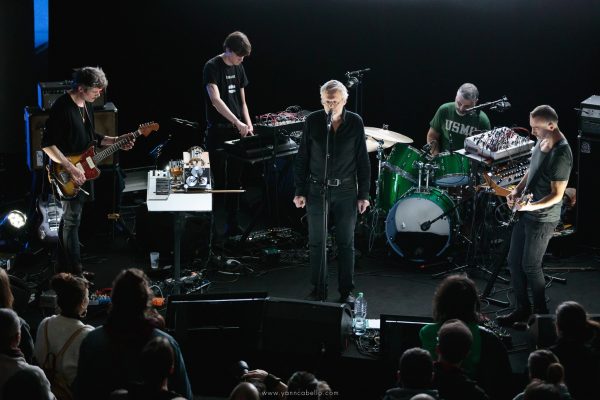 At the end of November 2017, OISEAUX-TEMPÊTE flew to Canada at the invitation of Radwan Ghazi Moumneh (Jerusalem In My Heart). The program for the quintet (Frédéric, Stéphane, Jean-Michel, Mondkopf & G.W.Sok): two concerts in Montreal and Toronto in support of the collaborative project SUUNS & Jerusalem In My Heart (specially reformed for the occasion), fraternal encounters buried beneath the Canadian snow, and to finish, a mysterious two-day studio session in Montreal’s legendary Hotel2Tango. Radwan shifts from the recording controls to the buzuk, the spiralling strings of Jessica Moss (A Silver Mount Zion) a welcome surprise. With usual urgency, OISEAUX-TEMPÊTE rushes with joy towards the invisible outcome.
​​

The fourth studio album and seventh release on the Belgian avant-garde label Sub Rosa, ‘From Somewhere Invisible’ (2019) embraces the new. Leaving aside for a while the logbooks of long journeys and the field recordings of the previous albums, the music of OISEAUX-TEMPÊTE unfolds as a twilight and prophetic orchestra around G.W.Sok’s punctuated voice. The poems of Mahmoud Darwish, Ghayath Almadhoun and Yu Jian question the modern man and his double, the strange and foreign, the fragmented real, the violence, society and its mirror. The eyes we hide behind, the ones we should open. These intimate compasses which can make us rise together in the midst of shrouded ruins; there is always a black raven to defy the horizon.

Edited and mixed between Montreal and Paris, produced by Radwan Ghazi Moumneh (Big Brave, Matana Roberts, SUUNS), ‘From Somewhere Invisible’ summons the fever of experimentation and the powerful sound of the game coming together in the service of a luxuriant and psychedelic drift. Synthetic brass meets hammered rhythms, string electrics with cracked electronics, saxophone cries and laughter at a pulsing and seminal bass.

In this moment of change, there are always the flashes of light, musical communion and the collective hypnosis grasped between ideas. From one sea to another, the gathering sound, the gathering glow, comes together. Desire, the great fire, at the four corners dancing like fireflies, ready to open the map of the world. 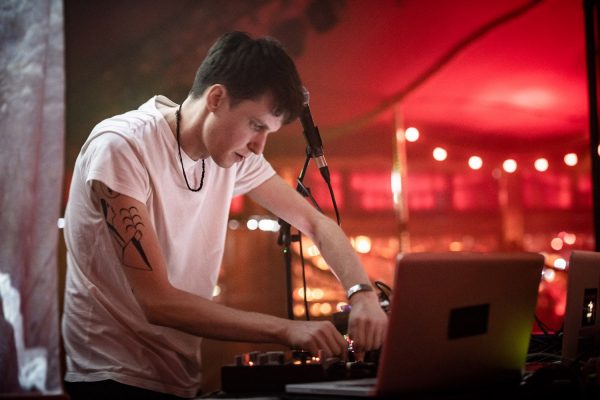 Paul Régimbeau’s path starts like many others at the end of the 90s, when he still
lives in Toulouse, is deeply moved by the first records from Vangelis and Aphex
Twin, and consequently starts to experiment with music production software.

He moves to Paris at 22 when his first remixes and releases meet the success of the
exploding « electro » french scene. Whereas this wave tends to get the public’s
attention away from the true relationship he nurtures with music, some remark this
more insular aspect of his sound, like french magazine Les Inrockuptibles, describing early work « Galaxy of Nowhere » (2009) as being the work of « one of the most impressive disciples of Brian Eno in this century of dark lights ».

To reclaim the deeper meaning and emotions in music, Régimbeau embraces
extreme metal music, where he finds sensations and feelings closer to his own. His
album « Hadès » (2014) offers a unique synthesis of the purer melodies of
electronica and an adventurous electronic take on doom metal textures and riffs.

The follow up under the moniker Extreme Precautions is a total contrast to anything
he has done in the past : a true punk record, described by The Guardian as « angry,
heavy, lunk-headed and anthemic ».

Proof of his ability to transcend genres, he performs in the edgiest international
festivals (All Tomorrow’s Parties, CTM opening for Electric Wizard), in postindustrial
warehouses and most industrial underground club nights (Berghain –
Berlin, Kaos – London, opening for Nurse With Wound with his Autrenoir project),
as well as in places of worship (Eglise St Merri in Paris), museums (Beaux Arts
museum of Brussels) and some of most prevalent classical music venues in France
(Cité de la musique in Paris, Auditorium de Lyon). Each of these occasions are
experienced as a chance to abandon himself and the crowd in the pure intensity of
sound.

He founded in 2011 together with his friend Guillaume Heuguet, In Paradisum
Records, fostering releases of other idiosyncratic French artists such as Low Jack
and December, who are now releasing on international record labels.

While his music was at first an introspective affair, he soon found interest in
collaborations, working with Charlemagne Palestine – another artist obsessed with
the transcendental potential of sound -, guitarist Gregory Buffier from Saaad (as
Autrenoir), with noise-rock band Oiseaux Tempêtes (Sub Rosa), among others.

With no surprise considering the high cinematographic potential of his music, he
signed two musical scores to full length movies: Papa Lumière by Ada Loueilh (2011), and Bridgend by Jeppe Rønde (2015). 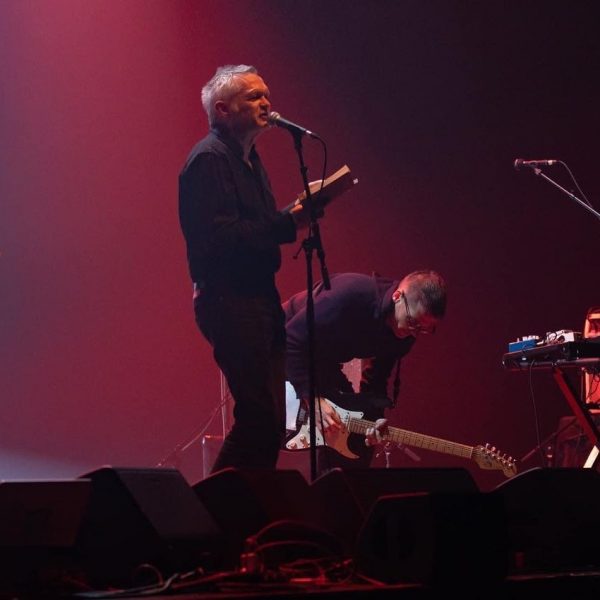 G.W. Sok (born 1957, real name Jos Kleij) is a Dutch singer, best known for his 30-year career as the frontman of the Ex. G.W. Sok left the Ex in 2008 to focus on a solo career and collaboration projects with other musicians, participation in theatre performances and spoken word performances. Apart from his musical career he is also active as a writer and a graphic designer.

After leaving the Ex, Sok started to collaborate with several acts among which the French experimental free jazz band Cannibales & Vahinés and the Italian band Zu. In 2010 the single “2-2-3 Fridges/Rid” appeared on Sickroom Records. He joined the Dutch collective Beukorkest on their 2011 tour.

In 2011 Sok released the book A Mix of Bricks & Valentines, a 400-page collection of the Ex lyrics and other lyrics he wrote. Also in 2011 De Eeuwige Optie (The Everlasting Option) was published,[2] an experimental film by SpOp featuring Sok as an actor. He also wrote the words for the film’s ending track “Illusies”. This track was also released as the 7-inch “Illusies 1 & 2″ under the bandname Zoikle, consisting of Sok, guitarist Lukas Simonis, cellist Nina Hitz, drummer Cor Hoogerdijk and Maarten van Gent on metal percussion.[3]

A new band King Champion Sounds was also formed, from the ashes of The Bent Moustache, the musical act of Krommenie-based, Kenya-born, UK-raised Ajay Saggar. This incarnation sees Saggar teaming up with Sok and, amongst others, Oli Heffernan (Year of Birds, Shrug) and has released four albums since 2013. In 2014 Sok published a double 10” with the UK noise act Action Beat.

Since 2015 Sok is member of the free-rock group Oiseaux-Tempête and is regularly joining live the collective founded by Frédéric D. Oberland & Stéphane Pigneul. Sok has contributed to the last four albums of the band.