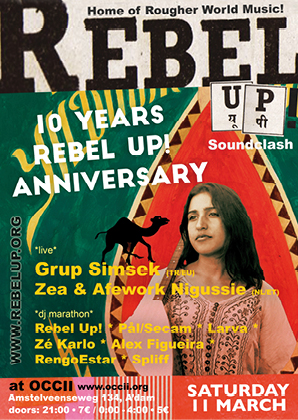 10 years of Rebel Up! Soundclash
The global collective Rebel Up! has been part of the OCCII since their very first Soundclash parties. In March they are celebrating their 10 year anniversary; having started out in OCCII as small NGO fundraiser parties, Rebel Up! steadily evolved into connoisseurs of folk, urban ‘world’ music and alternative global culture and promoting these new sounds where possible. In 2010 Brussels became the new home for Rebel Up! to put their global concept into action through party nights, concerts and festivals. Since then, Rebel Up! has done a music project in India, toured Canada, Brazil, Argentina, Peru, Russia and most of Europe. This year will also mark the birth of Rebel Up! Records, a vinyl & digital label for special global sounds. Select global, play local!

GRUP ŞİMŞEK (TR/FR)
A brand new Anatolian Psych-Pop sensation, Turkish folk meets groove and electric action! With members originating from Turkey, Germany, France, Italy and Great Britain, Grup Şimşek (pronounce «Shimshek») embodies the Outernational generation. The group is led by young singer/multi-instrumentist Derya Yıldırım, aided by fantastic drummer Greta Eacott and also Antonin Voyant, Graham Mushnik and Andrea Piro, all of the worldtripping band Orchestre du Montplaisant (Catapulte Records). They deliver their own interpretation of Turkish jewels by artists such as Selda Bagcan, Barıs Manço, Özdemir Erdogan, Moğollar, Aşık Mahzuni Serif and Nazım Hikmet, but also draw their originality from beautiful compositions and a fantastic ability in improvising. The deep voice of Derya, killer saz melodies, acid sounds of the organ, psychedelica and groovy laments add up to a mesmerising sound. Their debut EP ‘Nem Kaldi’, released at the start of this year on Bongo Joe & Catapulte Records, is a tribute to several of these classic Anatolian folk, pop and rock songs. Derya delivers a splendid interpretation of Özdemir Erdoğan’s vintage song ‘Gurbet’. Gurbet is a Turkish word describing a particular form of homesickness: watching from afar as things turn bad in your homeland. Unlike western pop culture, Turkish pop music rather lives from traditionalised songs and endless ways of reimagining these. Grup Şimşek take the righteous and rich Turkish poetry to the future whilst not losing awareness of the past. They have already hit the stage in Germany, UK, France, Italy and Switzerland and now for the first time in Netherlands. Anatolian invasion on its way!
http://catapulterecords.com/grupsimsek