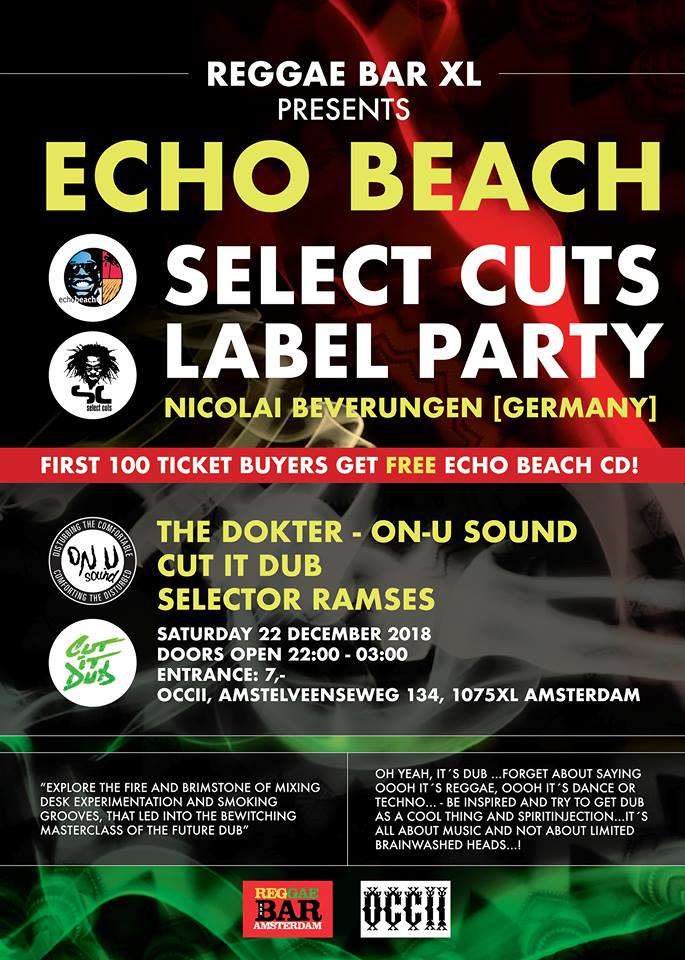 These names and many more have been releasing on the infamous ECHO BEACH label, the mother label of the other killer brand SELECT CUTS. Since the mid 90’s NICOLAI BEVERUNGEN has been the captain of these and gained world audience with his well praised compilation series KING SIZE DUB.
Long time resident @ Lounge Club Hamburg. Guest appearance at Batofar (Paris), Dub Club (Vienna), Reggae Summerjam (Cologne), Big Chill (London), Dub Champion Festival Vienna, “Standard Hotel – Gateway near heaven…” (Los Angeles), Dubmission (Los Angeles), Fusion Festival Berlin, Geometry Of Now Festival Moscow …!
This evening Nicolai will be our headliner as he plays a 1 1/2 hour set with the most wicked and legendary tunes from his labels. Guarranteed to satisfy the DUBHEAD that you are 😉
Also the FIRST 100 people to buy a ticket at the door will get a FREE ECHO BEACH CD!

✪THE DOKTER✪ (ON-U SOUND)
Patrick Dokter aka The Dokter has been a close friend of the legendary Adrian Sherwood. He is personally responsible for the release of numerous EP’s and albums that recently have been released on the boom label ON-U SOUND.
Frequently to be spotted as warm up DJ for the live shows that the label brings forward.
This night he will show how deep is your dub!
TUNES FOR THE EARS OF THE UNSETTLED….BETTER BE AFRAID OF THE FREQUENCIES…

✪CUT IT DUB✪
Dj Vette Mette & Mc Pauluzz are Cut It Dub, a dub/reggae live performance act.
These guys are rocking stages, festivals and clubs as Cut It Dub for more then 5 years.
Live often with percussion and/or trompet/sax, its always fresh and crispy…
Leaning on the gold age of dub, combined with the newest and the hottest tracks around, they are armed to the teeth to give the people a experience of dub wise!

✪SELECTOR RAMSES✪
Your REGGAE BAR host will play you the opening set of the night, bringing forth a surprising selection of released and unreleased dub to get you right in that mood!

“Explore the fire and brimstone of mixing desk experimentation and smoking grooves, that led into the bewitching masterclass of the future dub”

oh yeah, it´s DUB …forget about saying oooh it´s reggae, oooh it´s dance or techno… – be inspired and try to get dub as a cool thing and spiritinjection…it´s all about music and not about limited brainwashed heads…!