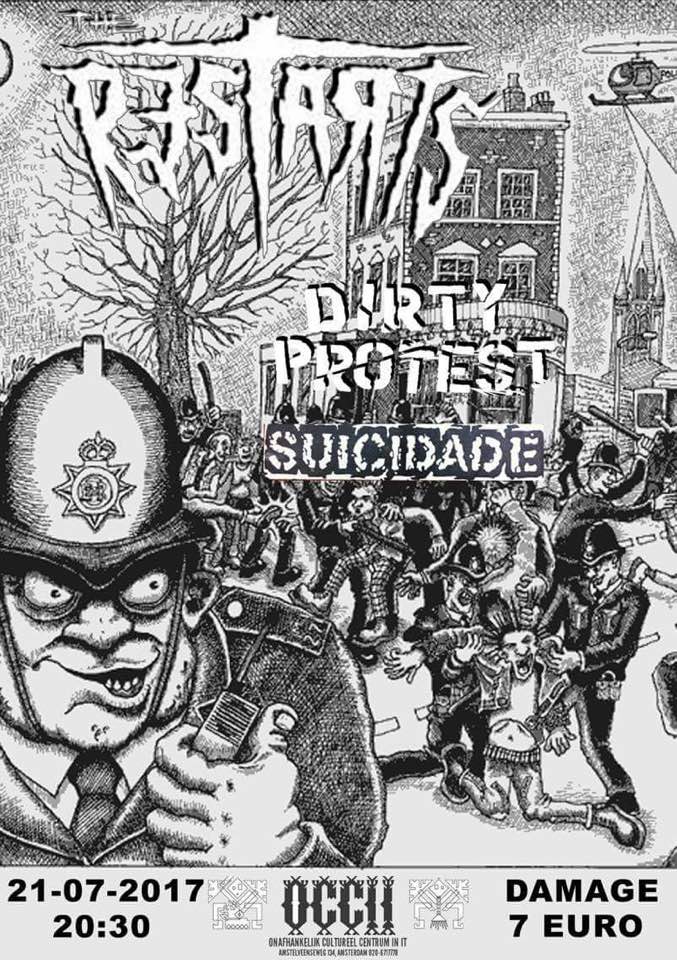 THE RESTARTS (UK)
The Restarts are: Kieran bass/vocals, Robin guitar/vocals and Jéremy drums. The Restarts formed back in 1995, in Hackney, London’s East End. We are a socially aware, three piece punk band. Ever since the 90’s we have been gigging in and around the UK and Europe, playing squat gigs and pubs mostly. We have been to the USA an Canada three times, and hopefully again at some point. We consider ourselves part of a large world wide network of DIY Punk Rock, we are punks first, musicians second. We feel the social importance of Punk Rock takes priority over the “marketability” of a rehashed trend. We stand by our words and have NEVER stopped liking the music we listen to, live by and make (even when it wasn’t popular) Please get in contact, get involved and help the punk scene grow independently of the music industry giants! We hope to be playing somewhere near you soon! -The Restarts

DIRTY PROTEST (formed in April 2013) are five filthy f*ckers, fueled by enthusiasm and alcohol, playing fast punk rock as if their sh*tty lives depend on it !! Their roots extend from ”77 to crust and wind up somewhere in the middle. Yes, for what it’s worth, they have the usual ‘ex-members’ thing going on (Radio Bikini, Spittin’ Vicars, Septic Death etc) but this doesn’t really paint the picture. Imagine Dead Kennedys f*cking Poison Idea and using Vice Squad as a condom and you’re kinda in the right area. Also, you have a weird imagination and should seek help!