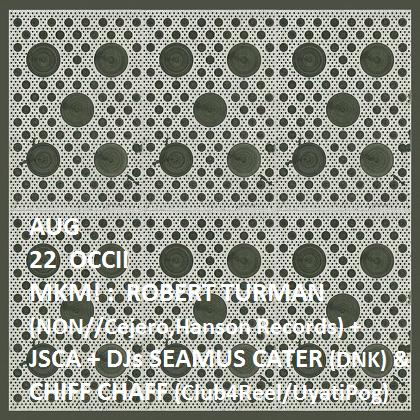 DJ CHIFF CHAFF & SEAMUS SAY:
THE AFTER SHOW DJ SET(S) WILL OFFER APPROPRIATE REFLECTION & ENSURE A POST-INTENSITY RUB DOWN WITH SURPRISING NUANCES . TIME TO BREATH. YOU CAN DANCE IF YOU YOUR LEGS WORK. HANG AROUND AND THIS CAN BE A BLAST……<<..... https://www.facebook.com/events/1508316899381098/

The last couple of years has been the scene for at a great comeback for Robert Turman, who was otherwise best know as former member and co-founder of pioneering industrial outfit NON. Brand new material has seen the light and older solo releases has been re-issued on important labels such as Hanson Records, Spectrum Spools and Dais.

If you haven’t heard of Robert Turman, don’t be perturbed; hardly anyone has. A shame, because Turman’s contribution to the industrial and synth wave underground in the late 1970s and 80s was unique and substantial. He first rose to prominence as part of NON, before leaving to pursue his own more expansive solo vision.

Turman released a number of cassettes over the course of the 80s, drawing on a wide range of experimental techniques. On Way Down, first released on Actual Tapes in 1987, he combined the noisy industrial aesthetic he was best known for with a spry, danceable minimal synth sound, albeit one fleshed out with guitars, pianos, tape loops and samples. It’s a great record, murky as hell but also engaging and accessible, and the new Dais edition – which is limited to 500 hand-numbered copies and includes new liner notes by Turman himself – represents its debut on vinyl.

There’s a bewilderingly large number of boutique record labels currently reissuing “lost classics” from the 80s synth and industrial underground, but Dais is one of the best, with a clear emphasis on the most grubby and characterful fare, as comfortable with neofolk as it is with electronics.

President of Noise Aaron Dilloway has been instrumental in bringing Turman’s work back into public conciousness, and last year released a collection of Turman’s roto-guitar improvisations simply titled Roto on Hanson Records. Almost every track on the album plays a different speed, allowing three hours of music in real time to be pressed on a single platter.

Three Parts is out now on Cejero. Most of the reissues are available through Turman’s website.