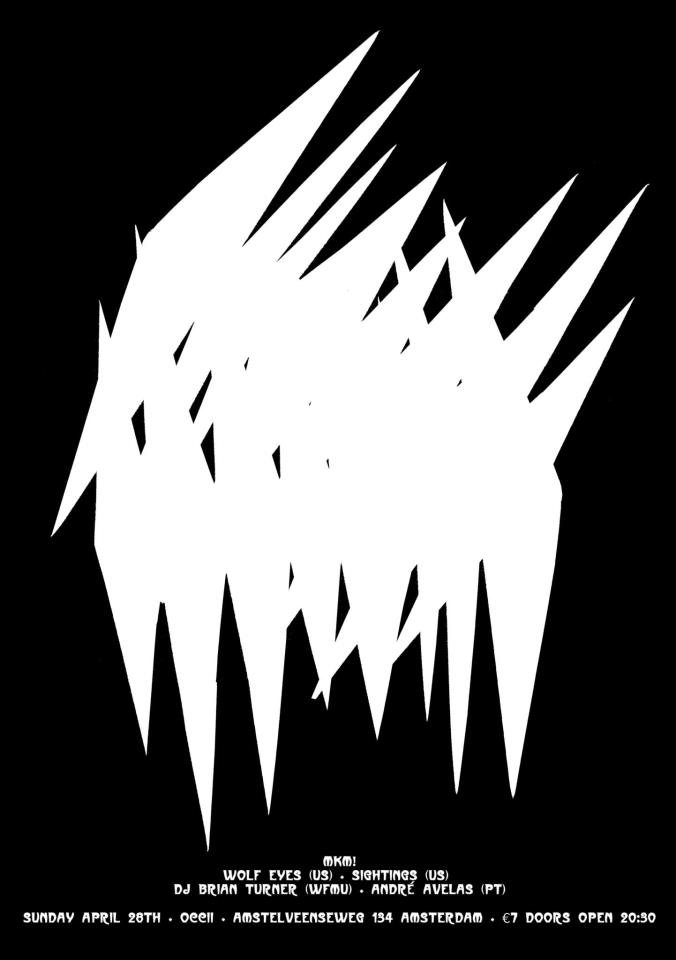 WOLF EYES (US)
Wolf Eyes is alive and plotting out more audio horror, always. Madman Mike Connelly has retired his slot last fall and the new guitarist is young gun Crazy Jim Baljo, as many of you might have heard stories of his exploits from the early Wolf tours and was one who first coined the term INZANE and plays and lives accordingly.
Some say Rock N Roll will never reach the same primitive raw vein hit of Bo Diddley at his more subhuman lurch or no unit can ever scramble the marbles left of what brain boiling suburban electronic punk outsiders did in the mid 70’s: Whatever you think, there is no denying the homemade nuclear war Wolf Eyes has left on music. Wolf Eyes was birthed in the shadows by a few liked minded individuals: Nate Young, Aaron Dilloway and John Olson in the late 90’s in Michigan. However, Wolf Eyes has become more than band, but a collective mutant ensemble, an art abstraction unit: musicians, print makers, photographers and more, all who share a primal shadowy vision of decoding the wilderness into the soul of humanoid from the deep audio arsenals.

SIGHTINGS (US)
Sightings’ deconstuctionist noise rock removes the melodies and hooks of standard rock & roll, leaving a mash of growls and feedback from the high-pitched grind in the guitar strings to the groan inside a bass amp. It’s a destructive post-punk mess that beautifully references weird outfits like Einstürzende Neubauten as well as the early-’80s no wave scene and noisy contemporaries like Wolf Eyes, Black Dice, Lightning Bolt, and Ruins. Sightings formed in New York City in 1997 with Mark Morgan (guitar and vocals) and John Lockie (drums) getting together and jamming. A year later they met bassist Richard Hoffman, and the trio put out a slightly more traditional, straight-ahead rock single on the Freedom From imprint. After realizing their art rock potential and drawing inspiration from the likes of Yoko Ono, Cabaret Voltaire, and Red Transistor, Sightings recorded their self-titled debut, released on Load Records in 2002. The group released two more albums for Load 2003’s Absolutes and 2007’s Through the Panama before switching labels to Jagjaguwar and releasing City of Straw in 2010.