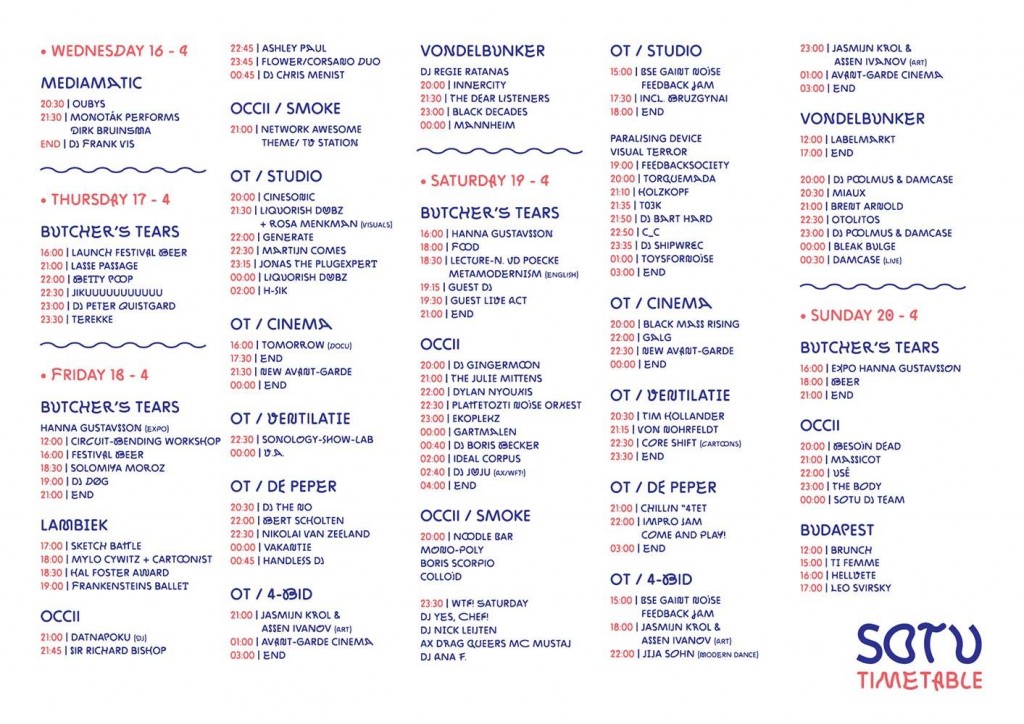 What does underground mean nowadays, in a gentrifying city where squats are a dying breed and hip coffee-corners, vintage-boutique and trendy barber-shops are popping up like mushrooms? What does avant-garde mean one century after it was coined by artists who, as soldiers in the vanguard, believed radical art could instigate the socio-political revolution? Sure, we can still find some great cutting-edge music in the few remaining squats of Amsterdam, but there are also treasures to be found on youtube and soundcloud, as well as the darker corners of the Internet. Some may say that the avant-garde movements failed because the artists and their art became part of the art-history they sought to destroy. They didn’t bring round the revolution, their revolutionary forms just got accepted over the years. We can see this as a pervasive theme throughout history; first something is revolutionary and demonized, after a while it becomes accepted, later outdated or forgotten, only to come back again in some slightly different fashion. We saw it happen to the ancient Greek temples, ready-made art, Cindy Lauper’s get-up and analogue synths. And still there is more unknown artistic territory to be explored…. So, what can we expect of this third edition of the SOTU-festival? Everything from retro to revolutionary, hopefully some food for thought on how to give new meaning to the concepts underground and avant-garde. And if you’re not interested in artsy-fartsy films, audiovisual installations, discussions or workshops, you can just have lots of beer and listen to the noise!

SOTU (Sounds of the Underground) is an annual music festival taking place in the ‘Oud West’ (old west) district of Amsterdam. The first two edition took place in May 2012 and 2013 and were an overwhelming success. Like past years, there are busy day and night programs planned across various underground music venues – located close to the city’s prestigious Vondelpark. The three main locations at the core of the festival are:  OT301 (Overtoom 301), OCCII and the Vondelbunker. Other smaller spots, such as, The Pepper (an independent vegan cafe inside OT301), Butcher’s Tears Brewery, Lambiek Comic Bookstore, Mediamatic and open hangout Budapest also play host to related events.

SOTU aims to ensure quality every year by working with curators, collectives and organizations whom have proven themselves as genuine contributors to the local scene.  It is important that this festival reflects the knowledgeable and hard working underground culture that exists in the Netherlands and abroad. SOTU’s fundamentally do-it-yourself approach invites the organizations to  join creative forces, form a collective and make this festival happen.

SOTU festival is produced by the Sotu Foundation – a cultural network-organization focused on the promotion of experimental, avant-garde and semi-popular art. Sotu Foundation maintains its contacts with various venues, festivals, curators, communities, booking agencies, artists, musicians and media. The foundation believes that the quality of this network is very high and of great significance to the cultural field of tomorrow. Through the establishment of the Sotu Foundation, the festival is aiming to present this network of different people, who are mainly engaged in small-scale culture, on a large scale.