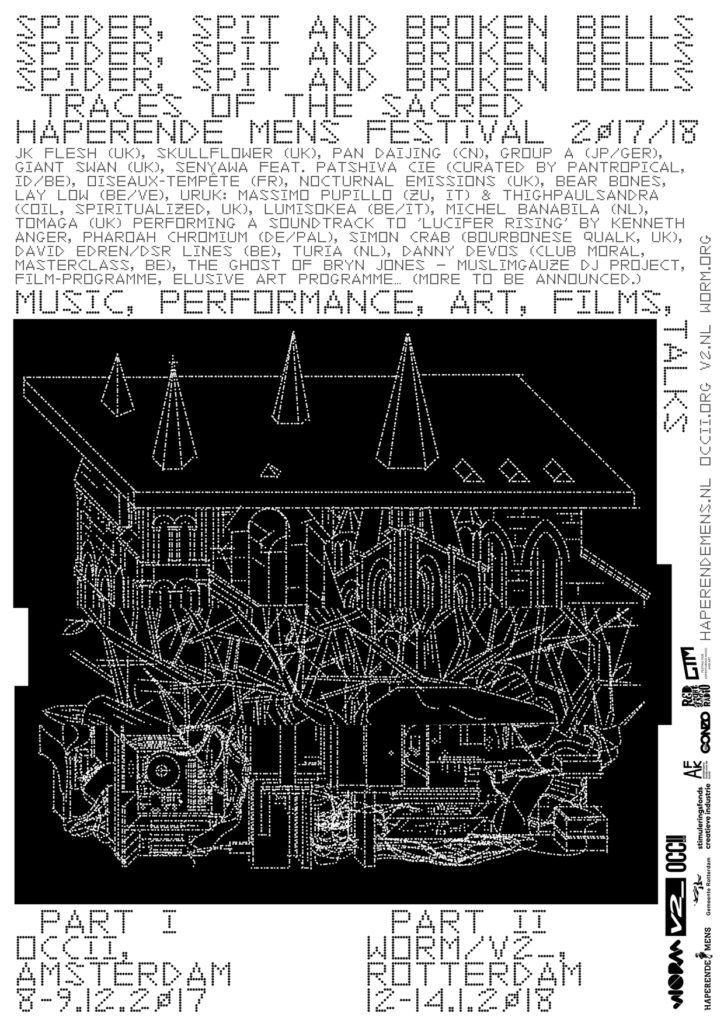 Spider, Spit and Broken Bells! Further explorations of the sacred expanding into new fields like black metal, ambient and film.

During our Festival we will have a very special Muslimgauze DJ-Project. We aim to collectively pay tribute to the great influential music project Muslimgauze created by British musician Bryn Jones (June 17, 1961 – January 14, 1999). A broad spectrum of DJ’s will play a 1-hour set with music of Muslimgauze as well as music which they think is inspired by his work. With these different sets we get a variety of interpretations on the vast body of work created by Bryn Jones.

The music of Muslimgauze has played a pioneering role in the development of electronic music. By bringing together styles as diverse as industrial, ritual ambient, dance and techno as well as combining previously unheard sampling techniques, the use of ethnic sounds and unique electronic repititions the music of Muslimgauze stands out through time.

Bryn Jones recorded so much material that new releases are still published to this day. His unique blends of electronic music with controversial Islamic and Middle-Eastern influences make Muslimgauze an indispensable subject during Spider, Spit and Broken Bells.

type ‘support’ in the white box

This edition will explore the idea of the sacred in the context of an overly regulated society. The present time in which political polarisation, alienation and thrill-seeking diverts us from inner experience and meaning. Where are those deep, intense moments that transcend our increasingly regulated daily lives?
Through a music and arts programme we present transgression, experiment and ritual as forms of sustainability; against the backdrop of today’s ever-increasing social disembodiment.

Not your usual cup of herbal tea maybe. Rather a mixture of spiders, spit and broken bells.