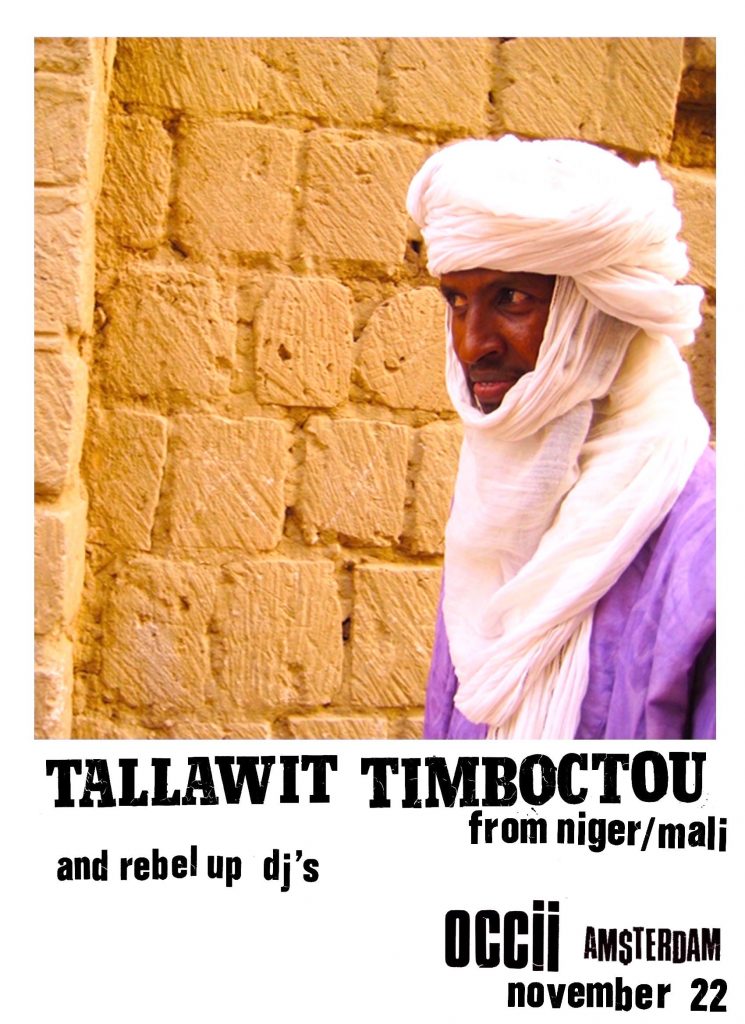 After going back and forth with the French embassy this week, they have ultimately denied the visas for the group Tallawit Timbouctou. …”I don’t have any options but to cancel the entire tour.”

“Tallawit Timbouctou are champions of takamba, a hypnotic traditional music from Northern Mali. Built around the four-stringed lute and pre-cursor to the American banjo, takamba’s droning distortion comes from signature handmade mics and blown out amplifiers. Accompanied by percussion pounded out onto an overturned calabash with mind boggling time signatures, the combined effect is trance inducing.

This is the music that long ruled the North of Mali, performed at festivities, blasting out of dusty boomboxes, and beaming out from village radio stations. Its origin is shrouded in mystery, and though purportedly dating back to the Songhai Empire of the 15th century, takamba’s heyday was in the 1980s, with the introduction of amplification. Musicians found a lucrative circuit, performing in elegant weddings, creating cassettes on demand, and writing songs for their wealthy patrons. Today takamba has fallen out of popular fashion with the youth but continues to thrive in a small network of die-hard traditionalists.

Band leader Aghaly Ag Amoumine is one of the remaining renowned takamba musicians. Descended from a long line of praise singers, he spent decades traveling across the Sahel, performing in remote nomad camps and crowded West African capitals. His compositions continue to circulate today and have become part of the folk repertoire. His group Tallawit Timbouctou, based in the city of the same name, continues in the family tradition and has featured both his brother and nephew as accompanying members.

Their album “Hali Diallo” (recorded at home in Timbouctou) is a relentless and non-stop recording, true to the form of takamba. Tracks blend seamlessly into one another, instruments are tuned mid-song, and Aghaly only pauses singing long enough for the occasional shout-out or dedication. Unfiltered and direct, as it’s meant to be heard, Tallawit Timbouctou is a shining example of one of the last great takamba bands. ”

a story of sahel sounds:: https://www.youtube.com/watch?v=3t3lbpM5EFI

GOOD READ :: “The music of Tallawit Timbouctou is the opposite of those Real World recordings, where the polish of the studio removed the heart and soul of the music. Here the guitar sound…is thin and insistent, these buzzing webs of riffs, constantly collapsing in on themselves in ever narrowing circles” 🔥 via Cyclic Defrost