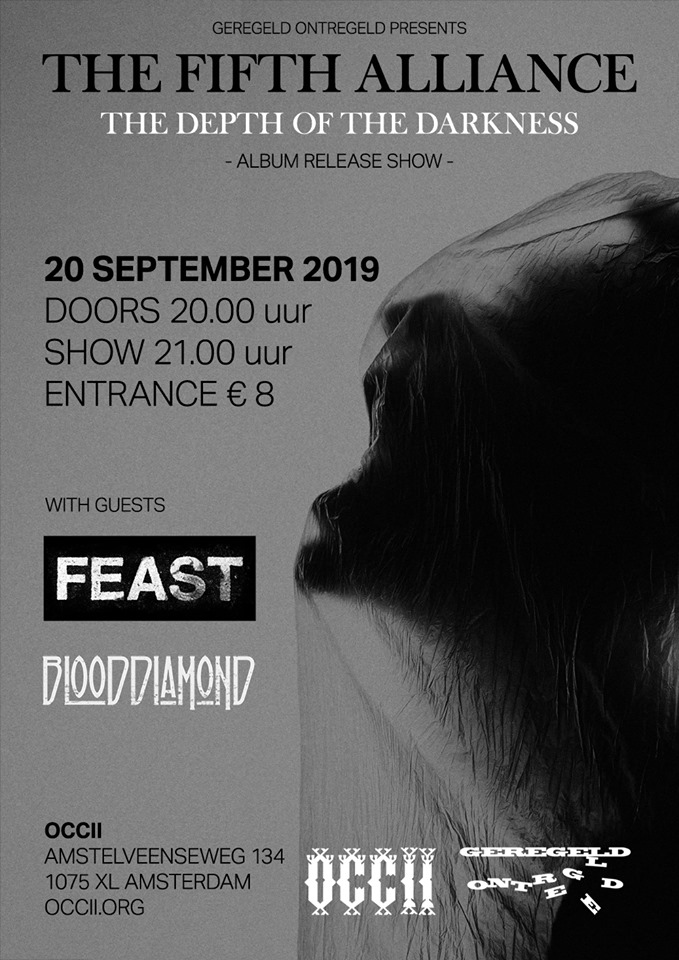 The Fifth Alliance “The Depth Of The Darkness” album release show, September 20th, 2019

The Fifth Alliance will release their third full length album “The Depth Of The Darkness” on August 30th, 2019. This calls for a celebration which will take place at OCCII, Amsterdam on September 20th, 2019. To get a taste of the new album, listen to the first single “Black” here: https://thefifthalliance.bandcamp.com/track/black

Special guests for the evening are Feast and Blood Diamond.

The Fifth Alliance is a 5-piece from Breda, The Netherlands, who blend bleak sludge, gut-wrenching doom and hypnotic (post)(black)metal. After debuting with the well-received album “Unrevealed Secrets Of Ruin”, and their follow-up “Death Poems”, The Fifth Alliance will be back, August 30, 2019 with their new album “The Depth Of The Darkness”, probably their heaviest and bleakest output thus far. The new album was recorded by Tim de Gieter at Much Luv studio, Lembeke (BE) and mastered by Brad Boatright at Audiosiege, Portland (USA). “The Depth Of The Darkness” will be released by Consouling Sounds, Burning World Records, Init Records and Bharal Tapes.
https://thefifthalliance.bandcamp.com/
https://www.facebook.com/thefifthalliance/

Feast
Five piece sludge, stoner, doom, noise band hailing from de IJmond, Rotterdam and Amsterdam NL.
Under the chromium filled skies in the Ymond region Feast has been layering loudness for years, sharing the stage for many years, hating this world for many more years. Aside from the usual escapism Feast puts this anger in making dark and heavy music. Refusing to play less than 110 dB
https://feast.bandcamp.com/
https://www.facebook.com/feastband/

Blood Diamond
Whatever is begun in anger, ends in riffs. Ampworshippers Blood Diamond is a four piece band formed in 2015 in the northern part of the Netherlands that creates sludgy rock.
Their first two records “Death Valley Blues” and “Saviours” were recorded by the band itself and contain heavy riffs with dynamic structures and lyrics mostly about the failures of men.
https://blooddiamondrocks.com/media/
https://www.facebook.com/blooddiamondrocks/