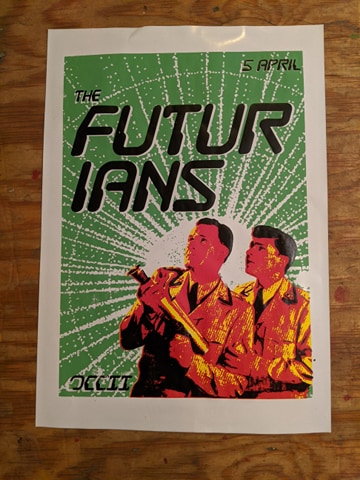 The Futurians (NZ)
After 20 years of distorting Aotearoa New Zealand, and with a googolplex of recorded releases, THE FUTURIANS are headed to Europe! A delicious scuzzoid blend of futura-punk noise, in fine.

The reviews have tried to capture their essence accordingly: “torn-down semi-punk skiffle”, “the sound of gay robots disco dancing and crushing everything underfoot”, “taser-war stomp, overamped”, “moto-beat wiggy-fuzz-workout”, “as raw as a skinned knee”, “armed with nuclear weapons of sonic dust”, “pure mayhem”, “the remnants of space debris raining down on the green hills of New Zealand”, a “lo-fi art-rock nightmare”, and “bent punk wizardry”

“They manage to reference and update the New Zealand avant-garde punk of the past with their own future primitive vision. I’m thinking of Xpressway and early Flying Nun but colliding head-on with Phillip K Dick and B-Movie Sci-Fi from the 1970s.”

“The Futurians are one of New Zealand’s most enduring creative ensembles, having pursued their unique approach to musical exploration for the best part of twenty years. The individual musicians in the band are innovators of the highest order, each sustaining successful individual careers as creative musicians and visual artists alongside their work with the band.”

“The best punk band on the fucken planet.”

With the support of Creative New Zealand Toi Aotearoa`

After 20 years of distorting Aotearoa New Zealand, and with a googolplex of recorded releases, THE FUTURIANS are headed to Europe! | The best punk band on the fucken planet.

THE FUTURIANS
Posted in MKM!, SOTU