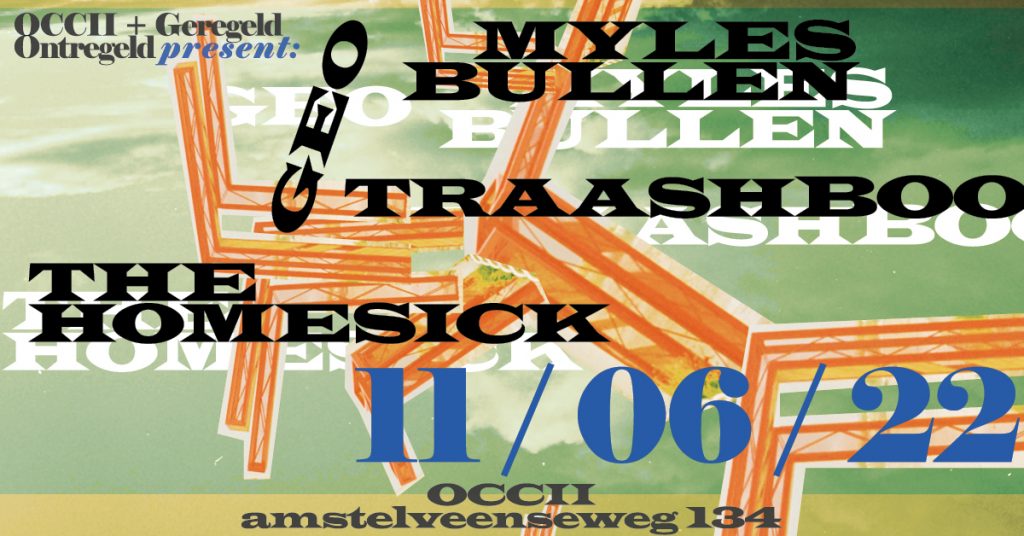 OCCII and Geregeld Ontregeld are proud to present a night full of amazing artists from here to across the sea and from poetry to beautiful herrie.
A great lineup with something for everybody.

Traashboo
Leipzig based Traashboo is a queer hyperactive organism expressing and celebrating themselves in a show full of self- empowering rap vocals and dancy beats. Traashboo does becharm with their fascinating stage energy and guarantees to turn every room into a world of sparkle. Follow the big hearted invitation to the party in the Traash Temple.
https://www.facebook.com/traashboo

GEO
Life is beautifully strange and Geo embraces it with dancepunk from the cracks of the earth. Their self-titled EP is a cocktail of no wave, post-punk and weird funk, which is so addictive that Bandcamp decided to list it as essential release. Geo shapes an estranging world of mutant funk that is fueled by dissociative vocals. Here the grooves dictate the songs, while wired guitars and vexing synths keep them company. A surprising crossover between bands such as The Contortions, The Fall and Liquid Liquid. Please do come and dance to it.
https://geoband.bandcamp.com/

The Homesick
The Homesick is an arty & posty punkband hailing from Dokkum.
In 2020 they released their second studio album and Sub Pop debut ”The Big Exercise”. Combining elements of math, baroque, and indie bliss into a big whirlpool of lovely & dreamy noise
https://www.facebook.com/TheHomesick

GEO, MYLES BULLEN, THE HOMESICK, TRAASHBOO
Bookings are closed for this event. Remainder of the tickets will be sold at the door
Posted in Electronic, Hip Hop, Pop