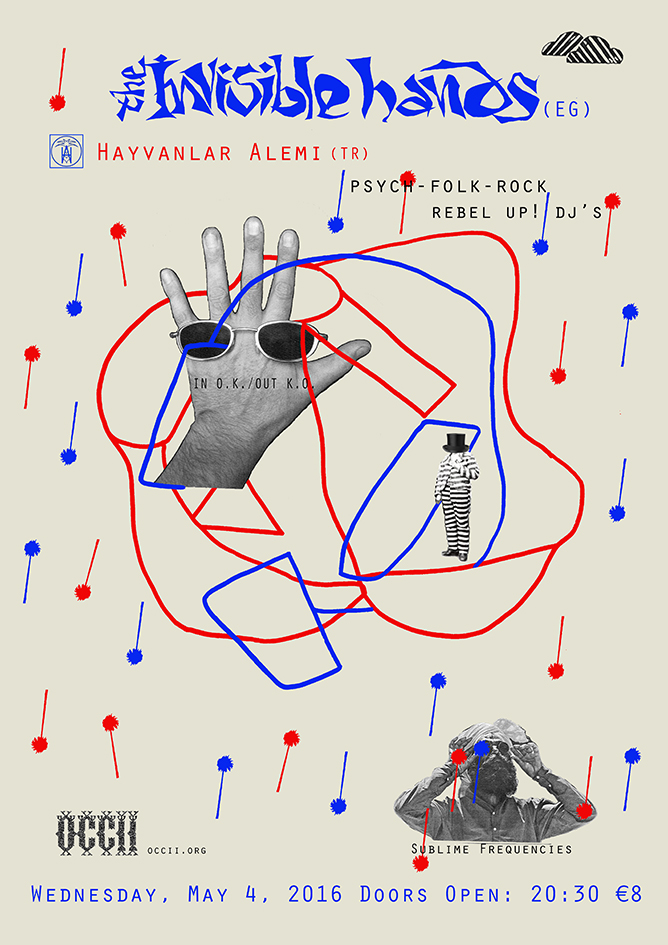 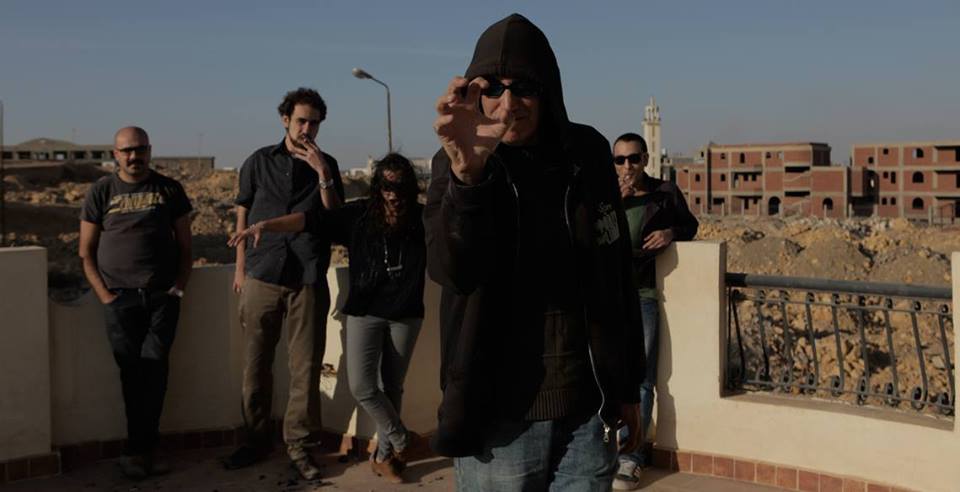 Songs – sung in Arabic, English, or whichever language they channel – are drenched in lovely psychedelic folk arrangements and vocal choruses with a nod to what could have potentially been music that surfaced decades ago but instead found its way into the future.

The group was established during the summer of 2011. Their debut was recorded in Cairo in May 2012, and two versions were released, one in Arabic and another in English, with both on a limited edition double LP. Their second album, Teslam, is currently out on CD with the LP being released in December.

“[The Invisible Hands] walks the knife edge between whomping skronk rock and noir-ish subterranean Hammond B-3 blues. This is the kind of mutant rock & roll that would have delighted Frank Zappa.” – Allmusic

“What an intriguing piece of deep-indie meat, cured to taste and seasoned by the skills of Alan Bishop and a crew of castaways.” – Tinymixtapes

“This is a group whose path is firmly set on producing good music… There’s an intangible, magnetic energy that fuses the band’s output effortlessly into an engaging, reflective and gratifyingly hazy puff of psychedelic smoke.” – Cairo360

Hayvanlar Alemi is a psychedelic folk rock band founded in Ankara. They got together in secondary school in 1999, when they were 14. Classical rock and heavy metal were big influences on teenagers in Ankara then, and they started their musical venture playing hard-and-heavy covers, but very soon self-discovered free improvisation and moved into a more avant-garde approach, and later on occasionally deployed traditional instruments, found-sound elements like live radio, and colorful stage theatrics. They were influenced by the new folk-infused experimental rock scene of the late 90s Istanbul, but isolated from any music scene in Ankara, their sound and song-structure diverged from their contemporaries as they incorporated elements from the findings of their musical research into their sound, which included folk, pop and hybrid sounds of South East Asia, East and West Africa, South America and Russia, as well as Jamaican dub reggae and Californian surf.

Having begun self-releasing cdrs in 2004, Hayvanlar Alemi released their first album “Gaga” through Ankara label 003 Records in 2006. Their second album “Guarana Superpower”, mostly culled from tracks on their cdrs from 2007 to 2009, was released by Seattle label Sublime Frequencies in 2010, followed by a cover of Mulatu Astatke’s Ethiopian instrumental piece “Yekermo Sew” on seven inch vinyl. Following the release of Guarana Superpower which received positive reviews from publications such as The Guardian, Uncut and Wire, Hayvanlar Alemi opened for Group Doueh in London’s Barbican Centre and played a surprise performance at All Tomorrow’s Parties Festival Curated by Animal Collective. Since then they have been touring routinely and presenting their music to live audiences in Western Europe. The band’s third official album “Twisted Souvenirs”, which was recorded in 2011 and 2012, come out on vinyl on German label Unrock on 2014 and in early 2015 as a digital download on Inverted Spectrum Records, a Bandcamp label managed by the band’s drummer.

Hayvanlar Alemi consists of Özüm İtez, Işık Sarıhan, Hazar Mutgan and Gökçe Başar. As they have been separated by geographical boundaries since 2006, the band has a flexible repertoire which allows them to play in power-duo and power-trio formations as well. In the past few years, Hayvanlar Alemi mostly toured with an old-school three piece set up with drums (Sarıhan), bass (Mutgan) and electric guitar (İtez), with an emphasis on heavy psychedelic rock. Band’s name translates to English as “Animal Kingdom”. Outside music, band members work in the fields of architecture, engineering, physics and philosophy.

“They ooze the alternative history of rock’n’roll from every pore” – The Wire.

HAYVANLAR ALEMI, REBEL UP! DJ'S, THE INVISIBLE HANDS
Posted in IN O.K./OUT K.O.