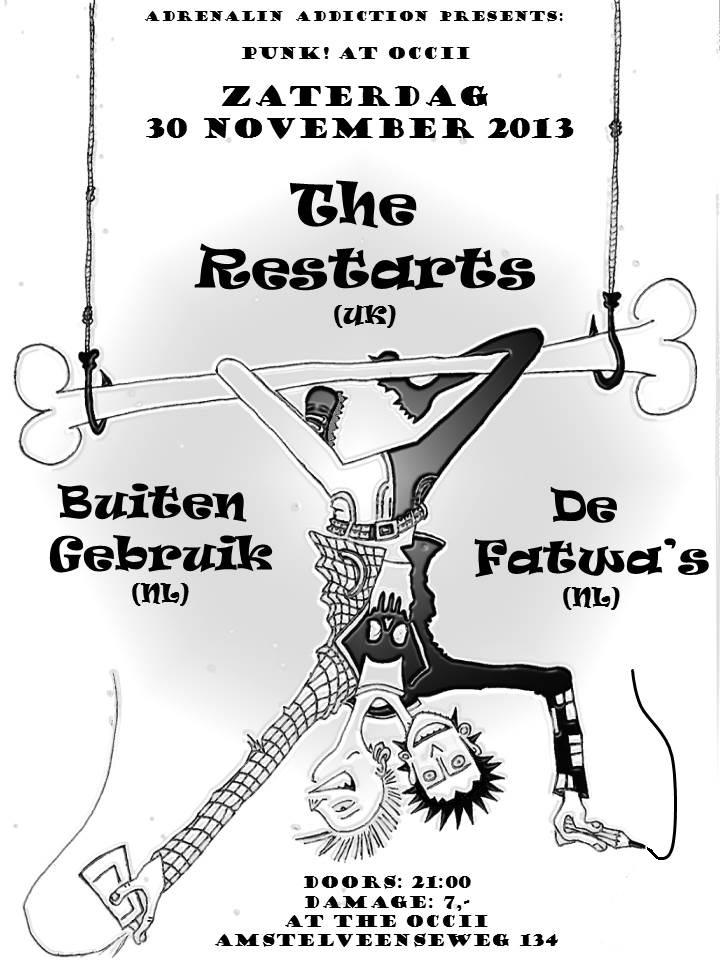 THE RESTARTS (uk)
3-piece catchy, aggressive political DIY punk/hc from London. They’ve just put out their new LP called “A Sickness of the Mind” and it rules!
Listen it here: https://soundcloud.com/therestarts

AFA support Warsaw!
We would like to support our friends with solidarity greetings and support of the recently attacked squats Przychodnia and Syrena in Warsaw/Poland.
As you may know they had to defend themselves against hundred of Nazi’s of a national demo on the 11/11
With a short statement and some financial support by selling vegan snacks at the concert, we like to support our friends / punks and activists. Any/all donations are appreciated.
This statement we would like to have signed by the known places / squats in Amsterdam and send this to the Kolektyw Syrena.

Support that shit! And come out and dance!

On national independence day, November 11th, 2013, our homes were brutally attacked by fascist militias. They came well-prepared: hammers, bolt cutters and pipes in hand, they cut the lock on our gate, forced the doors, broke the windows, burned two cars and wounded our friends. This was not a spontaneously organized attack. What more, it was an attack that was carried out with police accord: although the police had our entire block surrounded, they stood by for 30 minutes and intervened only once the fascist militia had nothing left to throw at us. It is clear that the attack was made possible by the organizers of the demonstration that was marching through the streets at the time: ONR (the national-radical camp) and MW (the all-polish youth) who have together created the RN (National Movement). The demonstration’s private security, or „Independence Guard”, released the bonehead militia on us and then hid them among the demonstrators once they were done. All those who shout slogans or step in line with the ONR and MW are responsible for their violence.
Despite the vicious assault, we effectively defended ourselves and our homes for half an hour. We did not give the attackers the satisfaction they were seeking. We resisted entirely by our own means, as we knew beforehand not to count on the authorities for support. We live here and we will stay here!

„Be ready”- we often heard from our migrant friends, who live with us. They had already experienced nationalist violence when their homes were set on fire last year in the city of Białystok. Those attacks also took place while the police, prosecution and local authorities watched on.

„Be ready”- we were often told by the tenants who hold a housing rights legal clinic every Tuesday in Syrena. They are a part of the Warsaw Tenants’ Association, which was co-founded by Jolanta Brzeska who was stalked, attacked and finally burned alive by a developer’s militia. She too, like us, lived a few hundred meters from the police station.

„Be ready”- we were often reminded by the workers and grassroots union members of the IP (Worker’s Initiative): Alas, violence against workers occurs with the authorities’ full consent!

We were ready, because we knew that the fascists aim for us to disappear. But we were ready also because we, the exploited, the deported, the evicted, or as they say, the freaks, the faggots, the illegals, have been defending ourselves for a long time already. Why?

The struggles of our everyday are aimed to change this oppressive system: we block evictions, join worker’s strikes, support migrants’ hunger strikes, protest the war, fight privatization and corporate drilling projects. We break barriers and instead, we plant gardens and build inclusive communities.

When the media present these attacks as a „fight between the extremes”, they tout to the benefit of the oppressors. Above all, they pull a fog screen over the real extremes: the difference between the 99% of us who try to make ends meet to survive in this country and the authorities who relentlessly exploit us.

We direct this call to all people: Be ready, because our homes are neither the first, nor will they be the last: They will come for you too! History forbids us to be passive, don’t let fear overtake you, don’t wait until it’s too late, GO OUT ONTO THE STREET, LET YOUR ANGER BE HEARD!