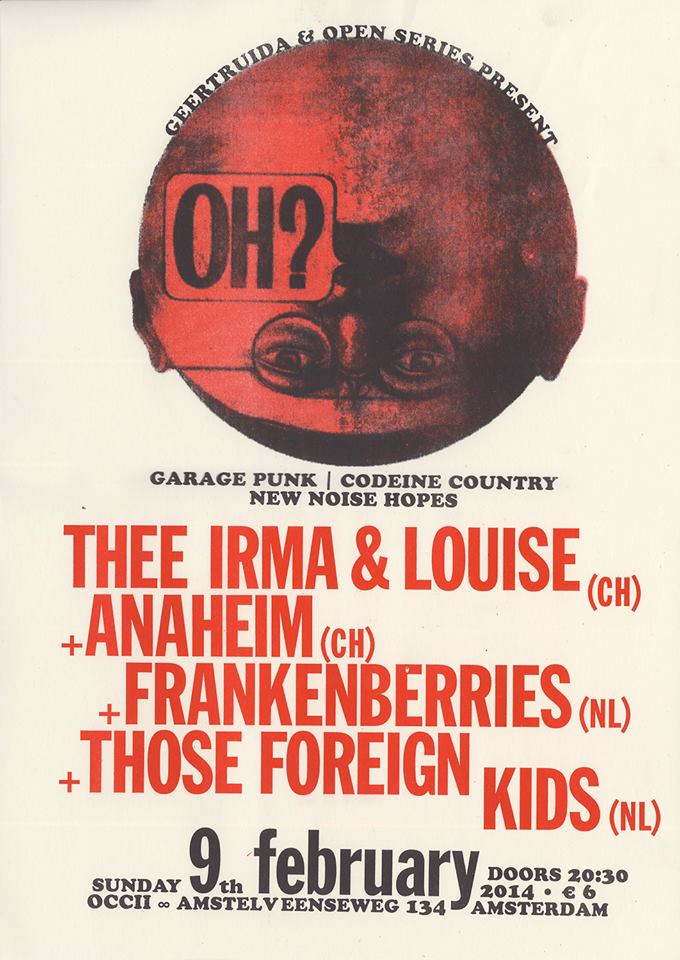 
In collaboration with Geertruida & Open Series

THEE IRMA & LOUISE have crawled out of the tundras of northwestern Switzerland in 2002, choosing to settle in Berne, city of love and swiss garage punk capital. They have been regular guests in Europe’s most dimly lit basements rooms etc., releasing a bunch of D.I.Y. records along the way. Starting out playing primordial instrumental garage punk, they have since added blues, country, a lot more vocals, and dark psychedelia to their sound, which has been likened to LINK WRAY, THE GUN CLUB or THE BIRTHDAY PARTY.

ANAHEIM are a guitar-banjo-two voices duo, sometimes with a third person sitting in on odds and ends. They hail from Zurich and Berlin and play what they call DOOMGRASS or CODEINE COUNTRY. They have just released their first cassette tape and shared stages with, among others, Rae Spoon and Scout Niblett.

Haarlem’s bright new noise hopes THOSE FOREIGN KIDS grind up surprisingly ferocious sonic barrages, for although the name might mislead you, there’s only two of them producing that tsunamic surge. They’re like an ice-shelf surfing rabid polar bear coming straight at you. Nailed to the ground in terror you can only wait to be washed away.

FRANKENBERRIES is an Amsterdam based four piece band making garage punk rock’n roll that started in late 2012. Band members are Erik on rhythm gtr & vx, Satori on lead gtr, Manu on bass & vx and Kevin on drums. They are all members of other active noise, punk, post-punk, and riotgrrl bands. In its brief existence Frankenberries has already played many national/international shows and radio stations.
frankenberries.bandcamp.com