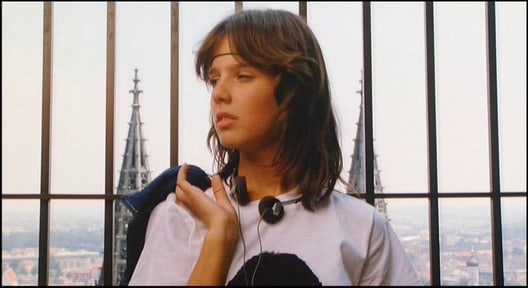 
OCCII is happy to have Jeffrey Babcock screen a film at ours!

A disarming film buzzing with the thick German atmosphere of alternative Berlin in the early 80s. The story is very straightforward and simple… what this film is really about is its attitude and mood, along with all the mesmerizing images combined with Kraftwerk-ish synthesizer pop music, and how all these elements fuse together sensually. This obscure cult thriller is beautifully stylized, and its theme is the obsessive “fan” phenomenon in modern music culture.

Der Fan stars an electrifying Désirée Nosbusch as an introverted 16 year old girl who becomes obsessed with the singer “R” of a famous pop group. She has an imaginary love affair with her idol, which results in an accelerated delusion. When she travels to Munich to meet him at a television talk show, things spiral totally out of control. There is an odd sense of detached humanity throughout the movie, giving it a certain haunting presence.

The hypnotic soundtrack for this film, blending elements of early dark wave and electro pop/synthesizer rock, is by the 80’s German electro-cult band Rheingold, who were part of the Neuen Deutschen Welle music scene. They conjure up a stylish soundscape for this flick, which ends up being a kind of horror film, but a highly unusual one. Wanna see something different than all the formula flicks in the cinemas downtown? Feel like something raw and cultish… a “blast from the past” that you will never have the chance to see in a cinema again? Here is a film that seduces you like a magnet with its deranged, hypnotic atmosphere. A very rare screening.

As one critic said; “The Fan is a dark and twisted film that takes society’s obsession with celebrity to pretty insane extremes, but it’s so well done that you can’t help but get sucked in by it all. It’s as much an art film as it is a horror picture but it’s nothing if not enthralling.”

This will be a dazzling high-definition projection.

If you or a housemate/family member has signs of covid-19 or is diagnosed with covid-19 in the last 14 days, please do not attend this screening. Keep distance to other visitors and volunteers of OCCII. Covid-19 is not a conspiracy.

Entrance is FREE, but we ask you to make a booking/reservation ahead via our website (update: currently fully booked)
You can reserve 1 chair if you wish to sit separately, or 2 if you will arrive as a pair.
Reservations are valid until 10 minutes before the movie starts

We will have a few chairs available for people that arrive last minute, maybe more afters reservations are cancelled because of no-shows.

Our bar is cash only, please keep this in mind!


Der Fan, Underground cinema
Bookings are closed for this event. No tickets will be sold at the door