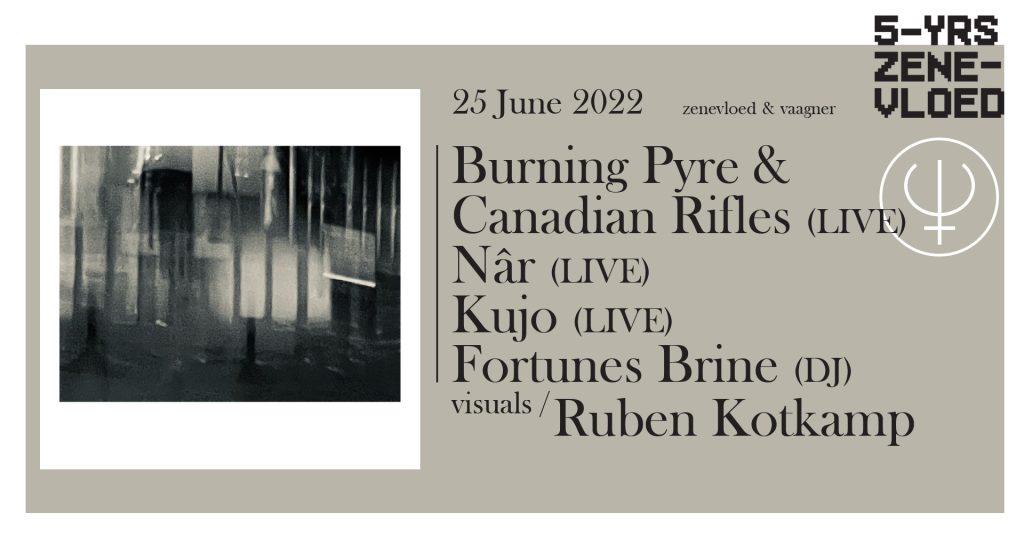 A collective declarrtion of individual action,
bound by visceral affection,
A veneration of sound and expression,
through mutual sensitivity.

“A biography of Berlin-based Vaagner should speak of both the label’s situatedness and lack of clear physical boundary in the current landscape of music labels. A rootedness further branching off in a family of experimental electronic labels, dealing in ambient, noise, and power electronics, and then again splintering away in a special kin releasing its music in physical formats. Vaagner’s situatedness, its inevitable presence, is one communicating its kinship through tenderness. It is an intimacy communicated in handling the contacts, making the tape copies, curating the artwork, sharing the narratives embedded in the music, the writing or commissioning of the descriptive texts – a list of behind the scenes work that characterize the diligence needed in the DIY scene.”

5 YRS ZENEVLOED
Zenevloed has grown over the past years to be an international, transdisciplinary
collective. We have continued to dedicate ourselves to presenting experimental music and art globally, in fitting contexts, reaching out to defining presences in the scene – based on qualitative output rather than amounts of clicks. Adhering to collaborative DIY/DIT ethics, networks have blossomed into friendships. In our 5 year anniversary we hone these connections by inviting close collaborators to exchange during concerts, radio shows, and events this year. And, as always, we will not get chased into the death drive of ‘performing’ in the scene.

Burning Pyre (UK) & Canadian Rifles (PT) – LIVE
The first full-length collaboration between Burning Pyre and Canadian Rifles, “The Snipe & The Clam” encapsulates a shared sensibility and vision. Initially seen together on the Vienna Press/Vaagner compilation “A Declaration” in 2019, which was followed up with a second piece last year on Burning Pyre’s Opal Tapes debut, “United Angels”, the two artists cultivate a unique aural world with a singular voice.

Nâr (LB) – LIVE
Listening to NÂR’s tracks, one rediscovers the evocative power of industrial electronic music. Handcrafted, abrasive, sometimes fragile, the sound work assembled by the Lebanese artist Nadia Daou appears terribly instinctive. On stage, her music takes on the appearance of a leap into the unknown. She assembles live synthetic, hypnotic, dark and sometimes brutal tracks that revive a fundamentally humanist and organic experimental tradition. Now based in Switzerland, her performances and various collaborations have made her a future masterpiece of current experimental music.

Kujo (LB) – LIVE
Kujo is the alter persona of Karl Choueiri, a multidisciplinary artist, mastering engineer and co-director of Exist Festival (Palestine) from Beirut, Lebanon.
Weaponising the usage of noise, drone, and rooted instrumentation as means of confrontation, Kujo’s uncompromising approach to music is to observe, interpret and report the current state. Expressing angst on stage, and drawing a parallels between global conflict and internal turmoil.

Fortune’s Brine – DJ
Fortune’s Brine is a shared alias that is adopted by various Vaagner related artists for different projects, letting the music speak for itself without any certain predispositions towards the producer(s).