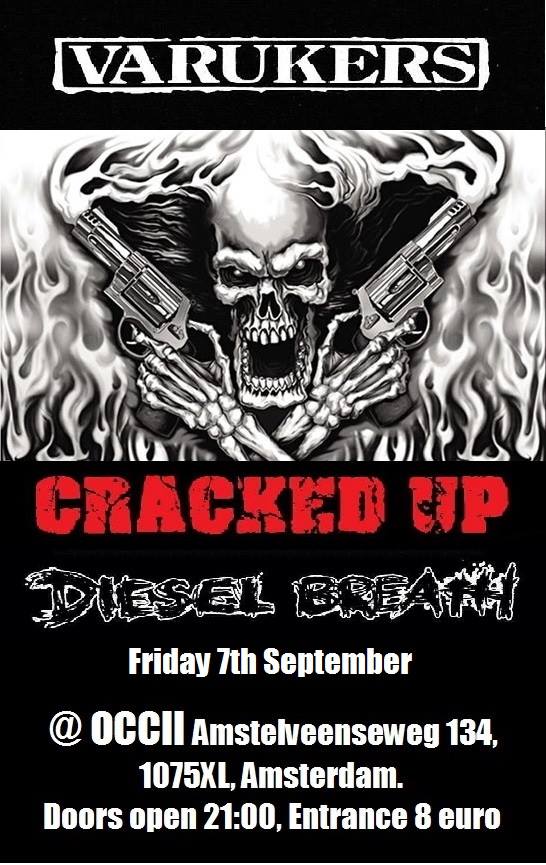 Original gangsters of punk/metal crossover, THE VARUKERS formed in 1979 in the same musical family that would spawn DISCHARGE, CHAOS UK and AMEBIX, blending spit-drenched punk rock intensity with a heavy metal wall of sound and unrelenting drum battery.

Initially known as The Veruccas, the band altered the spelling of their name to “The Varukers” in order to convey more aggression. When recording in the early 1980s, they were part of a broader trend known as “UK 82”, Second Generation Punk, or UK Hardcore. Bands such as The Varukers, Discharge, Chaos UK, Amebix, and Charged GBH took the existing 1977-era punk sound and melded it with the incessant, heavy drumbeats and “wall of sound” distortion guitar sound of New Wave of British Heavy Metal (NWOBHM) bands such as Motörhead. The new, harder-edged style also tended to use much darker, more nihilistic, and more violent lyrics, and vocals were often shouted rather than sung.

CRACKED UP
Started in 2013, Cracked Up put together a quartet of ladies who, coming from different backgrounds, were equally pissed off at some things, and eager to lay them down in a bunch of songs for you to enjoy.
Line up changed since, but the spirit remains.
We’re still Amsterdam-based, punk-rooted, loud, opinionated and, fundamentally… cracked up!

CRACKED UP, DIESEL BREATH, THE VARUKERS
NO PRESALE, TICKETS AT THE DOOR, CAPACITY 250
Posted in Featured, HC/PUNK!