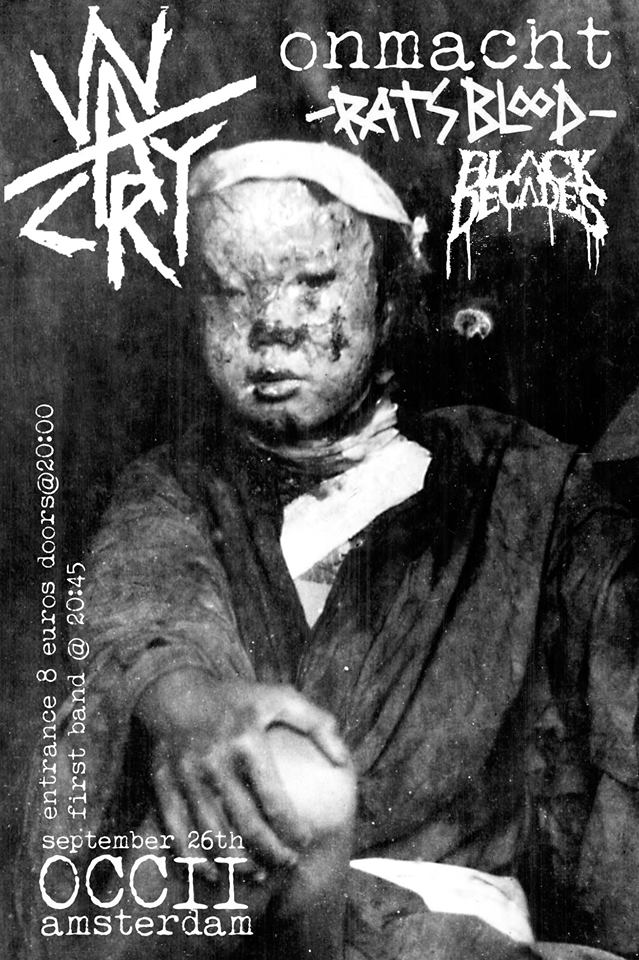 The SECOND gig at the OCCII after the summer break will be a blast! From Portland, Oregon, Warcry will deliver the goods and more. Onmacht, from Brighton U.K., will please your ears with no nonsense hardcore punk, that does not fit in with any of the current hypes. Rats Blood from Ireland are overhere for the GGI fest and luckily were added to tonights insane line up. Finally Black Decades from Utrecht will make sure there will be a portion of filthy black metallish noise added to the recipe for destruction.

Black Decades formed in 2012 by members previously active in Dutch hardcore-punk bands such as Cathode, Kriegstanz and Staathaat. Having played in these bands for many years rendered the urge to find new ways of expression within the heavy and extreme side of the musical spectrum. With focus on simplicity in songwriting and sound, the band went on to explore the primitive and raw side of metal, crust and doom. Anno 2014 Black Decades has recorded their debut full-length, which is expected to be released sometime 2015.

Black Decades – hideous life in the dying light of day

4 LOUD bands on a saturdaynight. Doors will open at 20:00 hrs and the first band will start at 20:45 hours. Don;t be a fool like the people who showed up late at the Lifespite/Ajax/Impalers show and only saw a bit of the last band. We start on time to end the live music on time. Punks is early bedtime!