Hysterics, a young hardcore band from Olympia Washington (US), is currently on tour in Europe for the first time. We spoke to Adriana (guitar), Jessica (bass) and Stephie (vocals) about awkward shows, tour frustrations, and why this is the right time to be alive.

When did Hysterics start? Do you remember the first song you wrote together?

STEPHIE: We started the band in early 2010. “Arm Candy” was the first song we wrote, which is on our first EP. At the time the plan was for me to play bass in the band, someone else was supposed to sing. I remember working on it with Adriana and once we had the whole band together we made a lot of blown-out practice recordings of it, most of which are harsh and unlistenable to the point of being almost good. I still have them all. Maybe someday someone will unearth the “lost tapes” and cry because they are so amazing.

JESS: I didn’t help write the first song but I remember the first practice with the four of us. It was really sunny outside and it was at Adriana’s and Stephie’s house in Olympia. I remember being crammed in, I think, Stephie’s bedroom and learning “Arm Candy” and that Limp Wrist cover [that we did on our demotape].

Could you describe your song writing process?

ADRIANA: It starts with a riff…

STEPHIE: Yeah it starts with a riff and then we just think, “what would sound good after this?” It’s a lot of trial and error. For me, the most effective way is by writing part of the lyrics first, or some kind of singing part, and then working to build the music around how I want the vocals to go. When we get stuck… I don’t know, sometimes we abandon ideas entirely, or just come back to them when we feel inspired to, sometimes months later. The second or third song we ever wrote was never formally recorded or released, but the riff resurfaced three years later in the context of a totally different song. Then we abandoned that one, I guess…

JESS: So awkward for me. It was a benefit for a friend’s family. There were so many people there. That was good though because there were a lot of friends in the room. It was the first show I ever played in a band and I was so nervous. My bass strap fell off and I was shaking.

ADRIANA: I had a good time! I had played in bands for a while but never guitar so I was a bit self-conscious.

STEPHIE: Oh man, people just stood there, but I threw myself into it as well as I knew how, even if it didn’t translate to the people watching. I had also never fronted a band before but I realised right away that you had to go as hard as possible or you might as well just not do it at all. We were so incredibly sloppy but it didn’t matter because we believed in our idea.

What has been your favourite performance so far?

JESS: I have a few. Playing Gilman is really high up there. All the bands we played with at “This Is Not A Step” and all my friends being in one room gave me chills. Austin, Chicago and New York are all unforgettable. Weirdest? Probably watching someone jump across a pit in a trash can in some bar in Austin.

ADRIANA: It’s hard to pick a favourite show – Chicago in 2012 was one of my favourites. It was a very wild show, the people loved humour, and my mom was there!

STEPHIE: I have to agree on Chicago, Austin, New York, and Gilman last June. The show at Gilman, This Is Not A Step, was a fest celebrating the life of Sarah Kirsch, who had been a big part of the Bay Area scene for many years, and had passed away after a battle with cancer. Before her passing she had recently come out as a trans woman, so the event was emotionally charged not just because of the community’s grief, but because it forced everyone to confront the realities of oppression in its many forms. Being there felt meaningful, and everyone’s presence at the show was more intentional and attuned to others than usual. Plus, Los Crudos played and they were incredible!

JESS: I like the weird down time when you’re in a city, you don’t know anyone or what to do and you are just hanging out under a tree in front of a post office with your friends because it’s hot. The least? Probably having to be aware of like five people’s emotions and still be good to yourself.

ADRIANA: Tour is a wonderful opportunity to get out of your little world. Or maybe extend your little musical world to other people (my favourite part). Though I love the highs of tour, I tend to be cranky and love my creature comforts and being able to do what I want when I want – tour is a complete upheaval of that. It’s a change in state of mind and habit but it can be fun to push yourself outside of your comfort zone (e.g. 14 hour drives listening to only Biohazard).

STEPHIE: I love seeing other places I’ve never been, but touring also really takes it out of me physically and makes me feel insane. I always blow out my voice like three shows in, and I destroy my body because I can’t seem to use any sort of moderation when we play live. People have taught me how to sing “properly” but in the heat of the moment, it all goes out the window and I feel like I’m gonna die afterwards. I also can’t deal with not sleeping very much… it just makes me crazy… but I like hanging out with my bandmates and experiencing other areas, seeing what projects and bands people are doing and so on. I’ve made great friends on tour, seen killer bands and beautiful places.

What do you expect from this European tour?

STEPHIE: I spent a couple months in France a few years ago and visited the UK while I was there. I met a handful of punks that hung out with me or let me sleep on their floors, and I’m stoked to see those people again. I don’t know what to expect. We’re just winging it and hoping for the best. I’m personally looking forward to Basque country, and Brighton because I love it there, Poland because I never thought I would ever be able to go to motherfucking Poland… it’s amazing. I’m also stoked for Amsterdam because I’ve heard that OCCII is awesome.

JESS: It will be my first time leaving the US. I honestly have no idea what to expect. I’m sure touring the States is completely different. It’s actually been the hardest thing about this tour – not knowing what I’m getting myself into.

ADRIANA: I went to Brussels and Italy with family when I was 14. The whole time I was looking for punks and trying to smoke weed. This time I’m sure it will be easier to accomplish both objectives.

What and who are your inspirations?

JESS: My closest friends are honestly my biggest inspirations.

STEPHIE: Right now: my buds in Hysterics, The Black Panthers, Cece McDonald and Laverne Cox, our friends in VEXX, IN SCHOOL, NUDES, BRICKLAYER, and people who are making it happen in punk around the US and the world: Bryony in London, Osa in New Orleans, Sean Gray in Washington DC who did the Beyond Inversion compilation, to name a few.

Is there something you listen to on tour when you’re in a van together?

Has living in Olympia, a place well known for artistic communities and politically charged projects, influenced your music?

STEPHIE: I am the last person in Hysterics to live in Olympia even though the band started there. We’ve been split between Seattle and Olympia for a while now … they’re an hour apart, which isn’t that bad, but still a drag. I think Olympia has influenced our music in that it is a really fertile place for weird music and art and that was especially true around the time we started the band. Everybody there is in a band, for better or for worse. It’s so easy to make stuff happen there. There is also a strong feminist presence in Olympia, and while we still came up against reflections of patriarchy in the hardcore scene, it’s a less hostile place to start a feminist group than many cities can be.

ADRIANA: I am from Chicago but lived in Olympia for nine years. I’m sure it influenced the music if only because we all used to live there and it’s a small town in which it’s very easy to practice, play shows, and cheap to live in. Now I live in Seattle and work a lot more to pay rent. There are less places to practice and they are all expensive which make doing regular band things slightly more challenging.

How would you describe the current Olympia music scene?

STEPHIE: VEXX. There is well-deserved hype on them right now. Europeans may have heard of this. All I have to say is: believe it. It is true. They ARE that good. You have to see them live to really get how good they are … when I watch them I feel like I am watching the Stones circa ’66 or James Brown at the Apollo 1968 or Black Flag in ’82 in that it makes me feel like holy fuck, I AM alive at the right time after all.


What does feminism mean to you as a band?

JESS: This is hard to say because we all live different lives and experience things differently. Feminism and this band have definitely helped shape me into the person I am currently. I need my bandmates and they make me feel less alone with my struggles in this society, and that is sometimes all you need.

STEPHIE: It means the power to define ourselves and do what we want, not what other people expect of us or think we “should” be doing. Aggressively carving out a space that is free and open. And supporting each other and others who have their own struggles against oppression, to keep our eyes open to that.

What would you be doing right now if you weren’t in a band?

ADRIANA: Complaining about not being in a band.

STEPHIE: Wishing I was in a band. 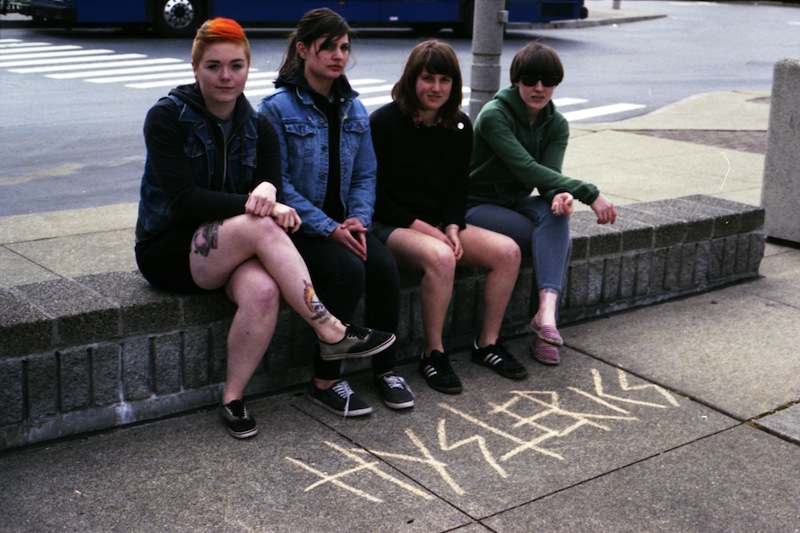 By: Kelly Chambers and Nora