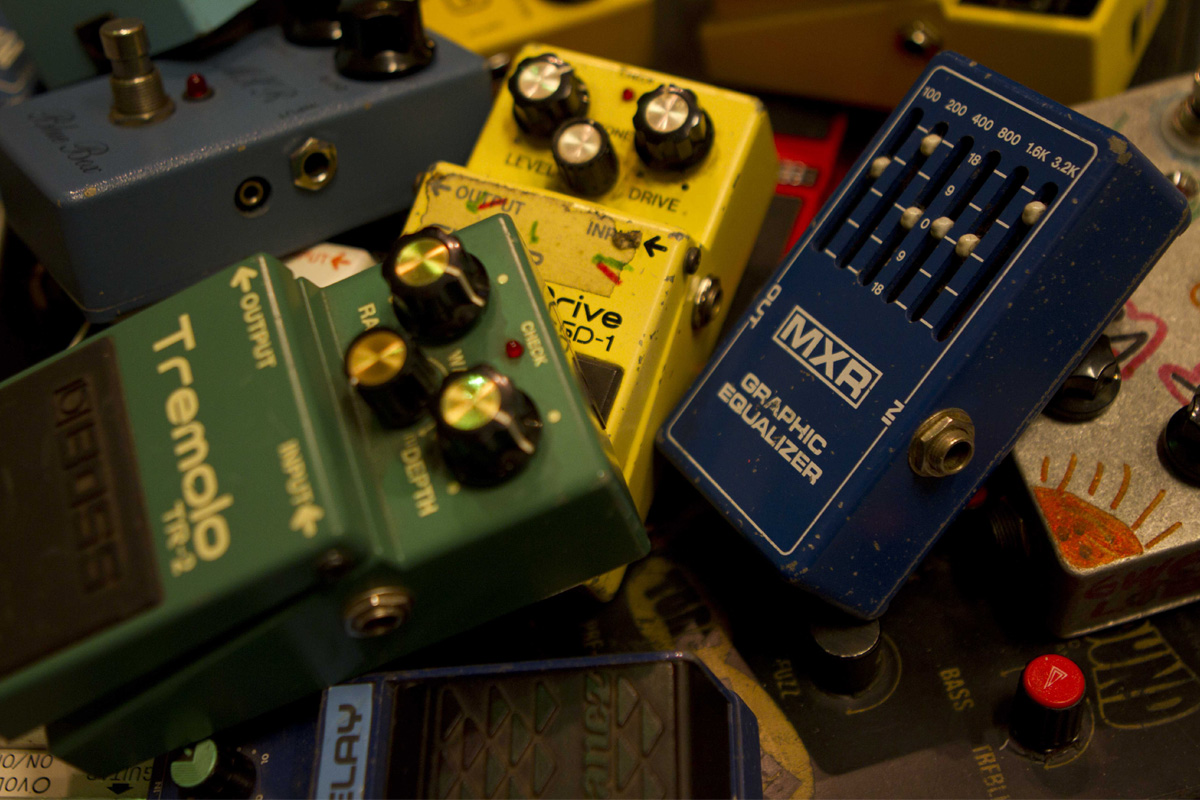 Corno Zwetsloot thinks that music needs to be recorded in analogue, without any tricks and with all the mistakes. His studio Next To Jaap, where many Dutch indie bands have recorded their albums or singles, is located in an old flower bulb barn in Voorhout.

Zwetsloot talks to us about figuring out how to record by yourself and the psychology of a band in a studio.
Corno Zwetsloot is the producer and audio engineer for bands like Wolvon, Zea, NewYX and The Sweet Release of Death. Next To Jaap Studio is located just outside of Voorhout, in the west of the Netherlands, and is surrounded by greenhouses and meadows with horses. Inside there’s a spacious kitchen, and cupboards contain the tapes of original recordings of albums. In the back of the control room there are two large couches, where musicians can listen back to their recordings, with a barrel of fermenting beer in between. Every now and then, something is bubbling, like a clock that strikes at certain times. To Zwetsloot’s right there’s a pillow, to his left there’s a guitar. He points at it.“I found that guitar when I was about twelve or thirteen, it was on top of my mother’s cupboard. The thing had been there for years, and it happened to be tuned in a way that it sounded like a Golden Earring song. So I was practising that song all the time.” Even though Zwetsloot didn’t have any musical experience, he was soon asked to play in a band. “That was a coincidence too. On a whim, one of my friends had written to a youth radio programme called Hutsgeklutste, and what he hadn’t expected, happened: he was invited to play on the radio with his band. But in reality his band only consisted of two people. So then I joined them on bass.”The amount of bands after that first one is moderate, Zwetsloot thinks. “I’m quite loyal. I played in December Boys, then Zoppo, and now in Space Siren. And before those, I had a rock ’n’ roll band and a cover band. With those first two bands, recording started. We decided to buy our own PA, because it was so expensive renting it every time. So then we had a mixing board, a multicable and a few mics, and we thought: ‘Now we can record as well, let’s just try it.’”

cold store
The location they found was naturally in his father’s flower bulb barn. As a kid, he used to play there, among the plastic crates and flower bulbs, and later on, he hosted barn parties there. “The first time we recorded here, the front part of the barn was still an open space, we hadn’t insulated anything. So the whole band stood in that open space, and then we placed the multicable over the road, so it was monitored in a box across the road. I simply recorded it on cassette tape, and I loved it.”When local bands discovered that there was a new studio in the area, they soon came looking for him. “I went to this youth club in Voorhout, and probably, somebody there said to somebody ‘That dude records.’ Suddenly lots of bands from the area came to our barn.”Those first years of recording, his studio wasn’t fully usable. The barn was still being used for what it was built for: storing flower bulbs. “It has happened,” Zwetsloot says, “that I was recording and suddenly my father opened the door and pushed a cart with flowers right through the recordings. My recording activities didn’t really mean anything to him, so, even when there was a band playing, he just had to get to his cold store. Oh well, flower bulbs absorb sound quite well, I guess.”

sample
Zwetsloot will never switch to digital recording. “I have recorded digitally elsewhere, but I just know that staring at a screen the whole day changes your perspective of music.” Above all, Zwetsloot thinks, you’re less likely to use the ugly tricks which have become so easy in digital recording. “A lot of producers smooth out songs totally,” he pronounces it with disgust. “Just listen to all the records on 3voor12’s Luisterpaal, and listen to every single one of them. Then you’ll hear that there are simply no mistakes on albums anymore. If there’s a silence in a song, and the band comes in again, then it’s usually tight to the millisecond. I’ve seen how people treat digital recordings. There’s for example a bass drum in a certain part and it’s just a little bit too loud, or there’s a snare that isn’t totally tight, and then they’ll just replace it with a sample. But then a song isn’t alive anymore. So I don’t do that, I don’t cut.”

“Sometimes,” Zwetsloot says, “I think that I’m a bad technician. To me, it’s more about the feeling. I’ve heard that people can soundcheck a drum kit for days. I simply think, OK, you position a few mics, maybe you’ll move them around a bit, or you change one, but after one and a half or two hours I wouldn’t know what else there’s left to do.”

A strong album doesn’t rely on an extensive soundcheck, Zwetsloot thinks. “In the beginning you’re still searching for rules that you can follow; ‘Never do this, always think of that,’ but those rules don’t always apply. A few years ago I bought a book, Behind the Glass, for which well-known producers were interviewed. I don’t know if it was intended, but what I learned from it, is that what works for Producer A won’t work for Producer B. For example if you record a bass, the one producer says ‘No amplifiers in my studio, they’re useless things, a DI works fine.’ Another would say the opposite: ‘DI? I don’t even have a DI in my studio, I record everything via the amp.’ My conclusion is that everybody should do their own thing, and do it very decidedly, and show it with bravura.”

When a band is going to record with him, Zwetsloot always wants to talk beforehand to get to know which sound the band itself likes. But he doesn’t talk about the details. “The drum sound of this record combined with the vocal sound of that other one — no, we aren’t going to do that. But you can say that you like the grand or harsh sound of this band, and the reverb or the dry sound of that one.”

cry
The problem, quite often, is that a band doesn’t have just one opinion, because a band is a collection of band members with different ideas. Zwetsloot often sees in the studio how these are put to the test: “I’ve started to think that, with my studio, I’ve become a sort of amateur psychologist. People have prepared for the recordings, and when they’re here, it has to happen. You can see it in everything. After the sound check, the loose way of playing disappears, it becomes more obstinate, people aren’t making music anymore, they’re only checking if there aren’t any mistakes. Over the years I’ve had several people crying in my studio. It’s quite an intense place. There might be tensions within the band, or people feel like something is expected from them and they can’t realise it. Then I make sure I attend to these people. And I say to them ‘Ah well, it’s just an album.’”

Apart from the tension, there is also something magical to recording: for a few days a band is working together very closely. “Often when, after the recordings, I’m behind the mixing desk with the bandleader, that bandleader says to me ‘I wished we could just live here — here my band is into it, here they give everything.’ Bands often leave this studio with new resolutions. But usually a few weeks after the recordings, they’re back to their usual routine. One cancels practice at the last minute because it clashes with his work schedule, and another doesn’t feel that well and can’t come.”

What is it then that makes bands believe in their own music while they’re in the studio? “Me.” He laughs and pours himself another cup of coffee. “The moment that a band is in a studio, music is their life. That moment a band is the most eager and the most willing. So when I say: ‘Come on, if we do our best on this, it could be really good.’ That moment, they would do just about anything for it to happen.”

card club
Zwetsloot isn’t proud of the Dutch music scene. “In the Netherlands there aren’t any bands that accidentally become famous, the way it happens in the UK and the US. I regret the fact that bands think it never becomes serious, anyway. Maybe it’s in the Dutch character. How many times have I heard that musicians would fancy a musical career, but they would still like to earn a decent income, and they would like to drive their car, and they don’t want to be away every night of the week… Well, those are the things that won’t happen when you’re a musician.” Zwetsloot drinks some of his coffee and then says: “Let me just put it bluntly: I’m convinced that a lot of people can just put away their instruments, and become a member of a billiard club or a card club. For a lot of people, the social aspect is more important than sweating your guts out while hauling your instruments. I get the impression that to most people it’s just a hassle.”

But it is a hassle, right? “Yes, but it’s a nice hassle. I think there’s something enchanting about going to a show together. Now, with Space Siren, I get into the van with a smile on my face, and I think it’s sad when the night is over.”

These days, aside from recording bands, Zwetsloot makes radio plays with children, too. On Monday afternoons, at his 8-year-old daughter Janneke’s school, he gives sound workshops, for which he sometimes invites all of them to his studio to record sounds professionally. “But I think the most exciting thing for the kids is that they can talk to each other via the intercom!” During the sound workshops, he asks the children what they think about sounds. “Their answers are wonderful. I make them listen to sound samples and ask them what it reminds them of, and how they think they were produced. If you play them something that sounds sad, they mostly all agree that it sounds sad. But there was also a sample of footsteps, and what’s really funny, they interpreted that sample so differently. One thought the footsteps were scary, another thought it sounded festive, because it reminded that kid of walking in the sunshine. And, what floored me: one kid said that it sounded ‘normal.’ That made me realise that people interpret sounds so differently. Sound just is.”