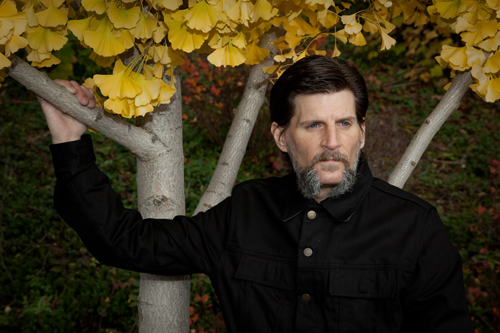 In the down time between tours, Dylan Carlson of the drone rock band Earth, decided to start a solo project. Under the moniker D. R. Carlson Albion, Dylan pursues his interests in Albion and folklore. Already he’s put out a tape of guitar improvisations and field recordings from around Waterloo Station in London (Edward Kelley’s Blues, limited edition release on Tapeworm), as well as a Latitude Sessions record (La Strega and the Cunning Man in the Smoke). He is touring Europe in September and October. Over a couple of emails, Dylan talks with Helena Sanders about the British Isles, authenticity in music, and the otherworldly moments of improvisation.So just as a quick introduction, can you say a bit about your motivation to begin work on as a solo project outside of Earth?

During the time leading up to recording the Earth albums Angels of Darkness pt 1 and 2, I experienced a number of life-changing occurrences. Before the first recordings I got very ill, and during the second recordings I had an experience that was out of the ordinary (I dislike ‘supernatural’ or ‘occult’ as descriptions, but those would work as well). Anyway, those albums were colored by my interest in British folk music, and occult folklore. As Earth was always open to new influences and directions with each album, I didn’t want to force Earth into that area [British folk] as its sole influence in the future, since my interest has been ongoing. So I decided I would do some solo performances to allow pursuit of that. Also, I love playing and touring. An Earth tour requires quite a bit of logistics and input and is not something I can do spur of the moment. As a solo performer it opens up other avenues of collaboration and an ability to tour on a smaller scale – fill the downtime between Earth projects with useful activity.

Where does the name ‘Albion’ come from?

‘Albion’ is from the original name of the British Isles – Alba – which means ‘white’ since the chalk cliffs, fogs, and mists were the first things to be sighted from the water by the romans. It’s also the name for the mystic England of William Blake and assorted British artists/visionaries/lunatics.

What was the link between those life-changing occurrences and the British music and occult folklore? Was it more of the place and history of the British Isles that first drew you out there, or the music?

Well, I had a Scottish grandma, and grandpa was stationed in England during much of the war (hence their meeting and marrying). Between some of her stories, and his encounter with a ‘white’ or ‘grey’ lady (supernatural death omen like a banshee, but English) and visiting relatives over there, I guess temporally it was the ‘place’ percolating in my mind and DNA, though once I got into the music, that influenced my fascination with the UK.

I noticed a lot of improvisation creeping into the last two Earth records and live performances. Those moments can sometimes even seem like a musical extension of your interests in folklore – of traveling between faerie worlds, portals, of going somewhere and coming back, and a sense of drifting time. Of course that’s a pretty literal interpretation, but has any of that exploration into improvisation been an influence on your solo work? Or is working solo a way to actually have more control?

Those are perfect descriptions and I continue to pursue the improvisitory path in my solo work and collaborations. I love improvising and being able to just play. That’s personally the most rewarding to me, though I realize it’s not always possible with bigger Earth shows, or to as great an extent. I am usually not looking to control musical situations. I love ‘happy accidents’ and spontaneous occurrences.

You’re releasing a split 7” with drummer/percussionist Rogier Smal this Fall on Amsterdam’s own Toztizok Zoundz Records! I’m sure there will be a few bearded rock dudes there who will read “godfather of doom, Earth guitarist teams up with Dutch improvised jazz percussionist” and get a bit suspicious/confused, haha. But after listening to the record it seems apparent that both you and Rogier overlap in your musical goals, even if you’re coming at it from different directions. On the 7”, Rogier is ‘all improv all the time’ while you’re digging into one riff and expose all this variation that can occur there. Is it important to you that you’re physically playing that same riff again and again? That you’re not setting up a loop?

I have fiddled with loopers, but have always found them a bit unsatisfying, and usually too complex, haha. The origins of Earth was repetition by ostinato, not via technologic means. I like the fact that you are trying to repeat the same thing verbatim, but changes occur and variations creep in, and that’s when stuff starts to happen. I like guitar pedals, but I don’t like a lot at one time (if I get over 3 in a chain I start to think I’m relying too much on them). The only artist using a looper I’ve ever really dug is Geneviève Castrée of Ô Paon, and her use is very organic and minimal, textural. I think it is more interesting to me to utilize open strings and feedback and harmonics to build up textures.

It seems like you are exploring something very human…

I think Rogier and I share the love of human interaction with music, and that includes the audience. I also think we share a love of playing without a net, as it were. I think we are both into that interaction between players, the space, and the audience that makes live playing what it is, the exciting bit.

Was there any discussion between you and Rogier about how the 7” would sound? Especially since you were recording separate tracks on different sides of the ocean?

There wasn’t really any discussion, though I did have the benefit of hearing Rogier’s side first. I had been toying with the riff on my side for only a couple weeks before I laid it down, and tried it out live first, which I always like to do. I think if you have two or more people who ‘resonate’ or whatever, then the distance is sort of irrelevant. That is what’s cool about long distance collaborations.

Your love of history and folklore shows its face through all your solo projects so far. I heard you’ve been doing bits of research along the road, taking time off to tour around the British Isles to talk to experts, friends, to explore ancient ruins. What have you been finding? How much of it goes into the D.R. Carlson Albion project, and how much is personal?

Most of it is personal, but that still affects what I do, and comes out in music. Music is a code or language and ‘You’ or your ‘being’ is always going to come through it or shape it or whatever alchemical process that occurs is colored by your sense of the universe or ‘reality.’

I read an interview with you by your sometimes collaborator in Earth, cellist Lori Goldston. You were talking about ‘authenticity’ and I thought it was spot on. Talking specifically about the blues, you say, “no one invented anything.” So, in light of that, I think your research and interest in the folk music of the British Isles is almost confrontational? Haha. I’m working off assumptions, but it seems like you’re treading into the dark heart of staunch traditionalists! What has your experience been like over there?

Everyone I’ve encountered has been very open and supportive and willing to share information and music. I have not encountered any negatives. No curatorial traditionalists trying to freeze it in amber or stuff it in a museums, haha. I think of it [music] as a living and changing creature, and from the people I’ve met, they seem to share the same feeling. I have my own personal relationship to it, and so does everyone else, and that’s what makes it alive and mutable. I think that you show music real respect by interacting with it, not trying to stop it in time or space. It has been around a lot longer than me and will be here long after I have crumbled to dust (or hopefully am ‘translated’ to other lands).

Finally…so I heard that you got to meet Billy Gibbons of ZZ Top. I’m not a very easily star-struck person, but I’d sweat a bit through that encounter. How did that go down?

I am generally not starstruck, they are just folks after all. However meeting Billy Gibbons, well it’s Billy Gibbons. A huge musical and sartorial influence, I was at a bit of a loss for words. Adrienne [drummer for Earth] jumped into the breach, and after talking about drums (they share a taste for inexpensive mahogany kits from the 60s that were made in Asia, sort of the cheap guitars of the drum world) we ended up discussing his recurring role on American tv show `Bones` where he’s the scary father of one of the female leads (he plays himself) and how he hoped he was going to be her love interest, not her dad, but oh well, haha. He was very down to earth and gracious and just fuckin cool. He was a lot smaller than I expected, we were both about the same height and very thin.

On September 27th Dylan Carlson plays together with Rogier Small at OCCII.
Update: on May 24th 2014 Dylan Carlson will play at OCCII again!