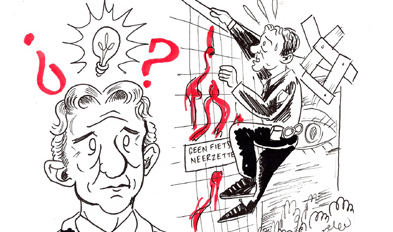 In the same weeks that a graphic novel on squatting in Amsterdam was published, the news came out that one of the last squats in Amsterdam was going to be evicted. For artist Maia Matches, this was a reason to draw about the upcoming eviction during the book presentation of de Kraker, de Agent, de Jurist en de Stad (of which she is one of the authors). Matches drew the cartoon OP DE VALREEP live during the presentation of the graphic novel at Pakhuis de Zwijger on May 13, 2014.