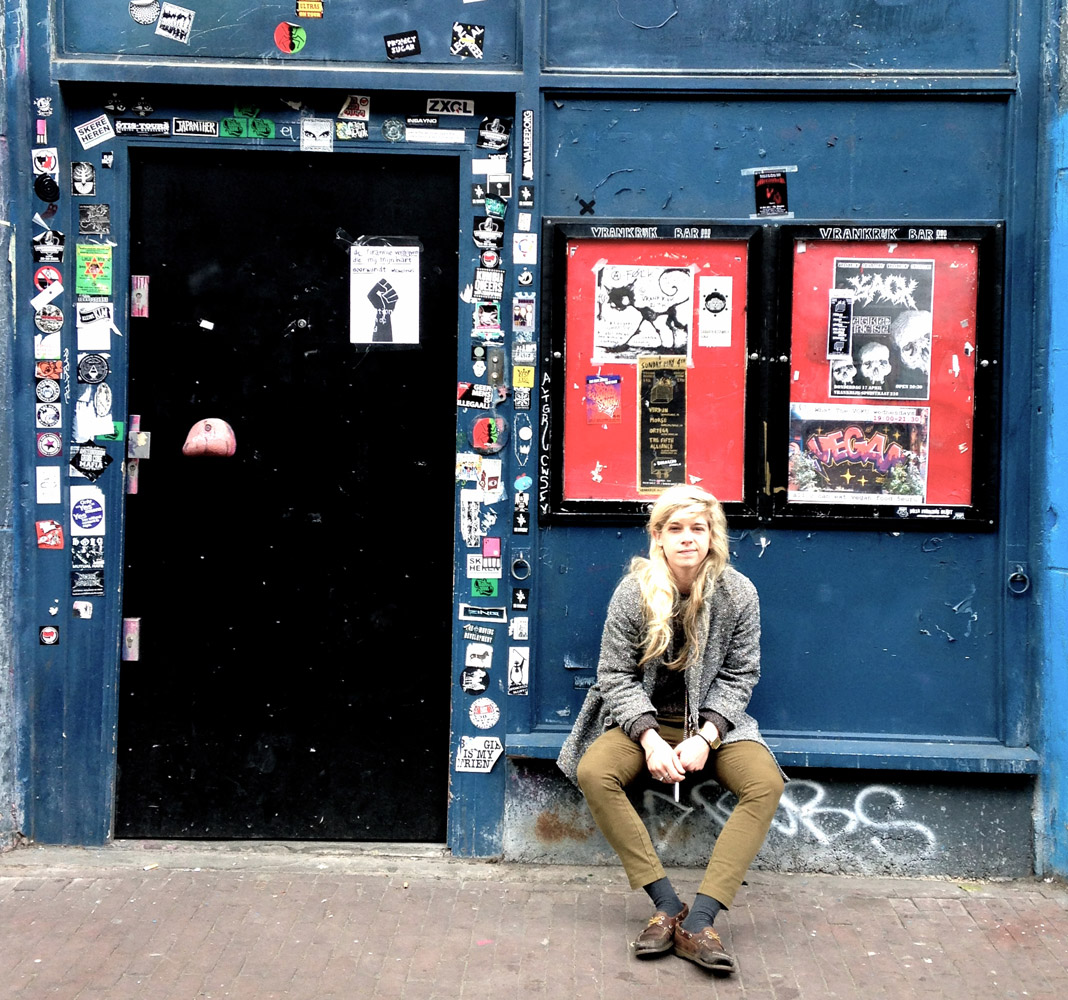 Organising an underground show becomes in many instances a matter of finding spontaneous solutions; creativity takes the place of what spending money can sometimes solve, and sharing is neccesarily involved. I remember this past February, eagerly pursuing my friends’ new band Slow Worries for a chance at throwing their first live performance in Amsterdam, a campaign of encouragement I’d launched since they first started practising together and was sure I could catalyse with a bit of show-pressure. In an attempt to try and sweeten the deal, I strategically mentioned over dinner to my friend Rosa how great it could be if her band Bird on the Wire would play on the same evening. Immediately, she and her organist Aino enthusiastically ran for their phones, calling Sven and Nina (bass/drums) to see if they were also free and feeling it. Aino’s friend Ton from Antwerpen was also at dinner and explained he, too, organises shows in an independent space there. Returning from a phone call in the other room, he exclaimed, “I can book the same show for the Saturday following and bring the whole bunch down to Belgium!”

Me: “Great! Now who else can we ask for support?”

Rosa: “I spoke to Niek from Nouveau Velo yesterday about advice on an amp, why not ask them?”

Me: “…and doesn’t The Sweet Release of Death play their LP release show the night before in Rotterdam? Maybe they won’t mind coming up and playing hungover if we provide plenty of pasta, drums and let them play/leave early…”

Rosa: “Just spoke to Juju, she would love to DJ if you don’t already have someone else in mind.”

Now it was really shaping up to be a family-style Sunday show! All of us know one another and in some cases, are dear friends from childhood. I called Bianca next and asked if we could borrow her drum kit from the OCCII practice space. “Sure — but only if they are back in shape and in time for the show on Monday!”

And so, on to the matter of billing. Under which of our many organising banners were we going to promote the show? I asked Nora and Maaike if we could make it an Open Series night but they felt a little shy about billing their own band. Adrenaline Addiction? No, she’s too busy and the genre’s not quite right. WTF? No way, we are throwing the party the night before. What about just plain Vrankrijk? No, the show is too nice. Too good of an opportunity to waste on not promoting another independent music collective!

So I called Rosa again, who’d been expressing interest since summer in throwing some shows of her own and maybe even expanding such a project into a local record label. A sort of music-for-and-by-musicians type initiative.

Me: “So all logistics for the show are set: Beau will let us into OCCII for the gear, Liú and Nina will bring the rest, Hugo is designing the flyers, Laura and I will screen print Slow Worries shirts, Dannah can cook us all dinner and Gary will do sound, what I still DON’T know is how to bill it! What would you think about using the show as a launch for your forthcoming label project?”

Rosa: “Of course I’d love to in theory, but we haven’t even started to develop a concept yet.”

Me: “That’s perfect! What could be more DIY underground than already producing a project BEFORE you brand it?”

Rosa said she would have to think about it and call me back after she talked it over with her project partner Alex.

And then, a short ten minutes later:

Rosa: “Hey Emma let’s do it! I’ll put together a website and a Facebook page for the label tonight, then you can release the invitation tomorrow, Hugo will print the flyers from school and Alex will make underwater visuals to project throughout the performances!”

Me: “Just like magic. What are you going to call it?”

Emma Wierda is a booker for OCCII and Vrankrijk among other places.
For more info on Meduse MagiQ, visit their website.
Open Series dates can be found here.