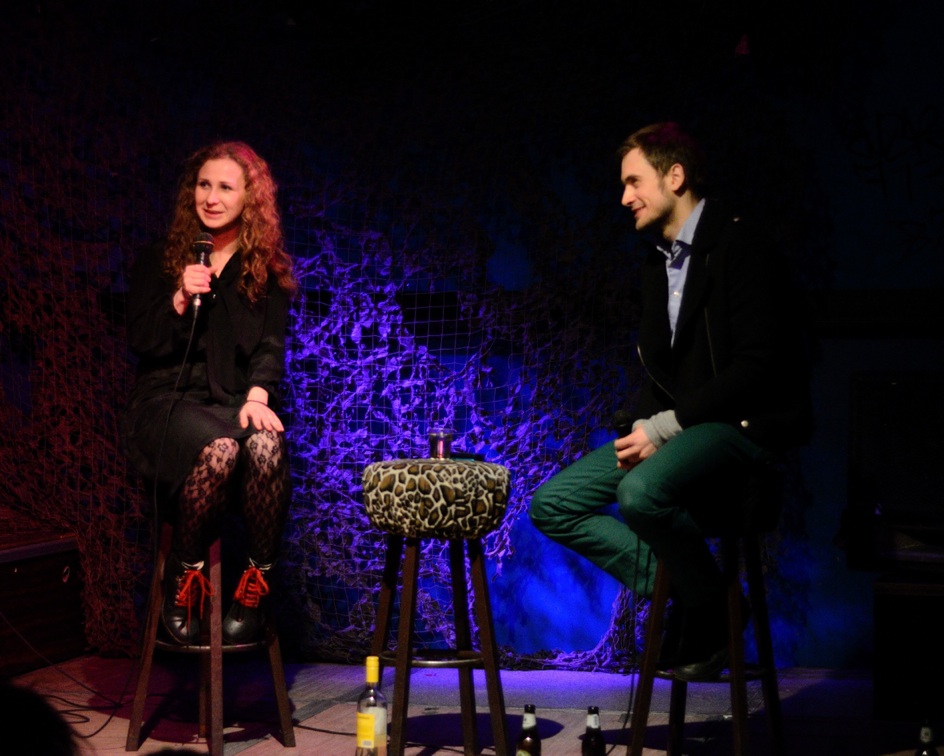 Last month Pussy Riot’s Masha Alyokhina visited Amsterdam’s underground venue Vrankrijk to answer the questions of a small group of community activists. Alice Burke and Kelly Chambers attended the talk and provided us with this report. What follows is a reflection on the Russian prison system, the absurdity of laws that forbid cats to stomp too loudly, and the ways in which art and activism can interact.

It’s a quiet Wednesday in Amsterdam. On a narrow street in the shadow of the Royal Palace, community activists from all over Amsterdam and the Netherlands (and further beyond) gather to hear a rousing speech from Maria Alyokhina, better known as Masha from Pussy Riot, who has come to visit. Masha and her fellow activist Nadezhda (Nadia) Tolokonnikova, have stopped in Amsterdam on their way back from a trip to Paris to discuss the prison system there. Masha tells us that Nadia can’t join this evening as she’s catching up on some well-earned sleep. Nadia’s husband, Pyotr Verzilov, translates for Masha.

Many will associate Pussy Riot solely with neon balaclavas, church disturbances and punk activism set against the backdrop of Red Square. What those gathered tonight see is something altogether more considered, more informed and infinitely more inspired by the experiences the women had during their stint in Russian prison.

Tonight is a Q&A and Masha ponders every question carefully but answers with strength and passion in an almost kneejerk manner once the form of the question fully registers with her following Pyotr’s translation. She is humble in her pronouncements and when asked about what they hope to achieve in Russia, Masha refers to the upcoming generation: “In Russia, very few young people get involved in human rights activities. This is something that we want to radically change, and we don’t know how well we’ll succeed in that.” As Masha finishes this sentence in a quieter, thoughtful voice, you can feel a groundswell from the audience, and someone says “ You’re doing it already”.

When asked about how they plan to continue their protests, she says, “We will probably continue to use the methods we used before and as usual hope it will all work out.” This draws a small round of applause and relaxes the audience. People seem more comfortable knowing prison has demonstrably not broken their ability to demonstrate. “All that mattered to us was getting the discussion started” Masha adds. And then, for the first time the word “Putin” appears from her mouth, flowing in a torrent of other Russian words unrecognizable to the audience, but “Putin” hits like a mallet to a gong. The link between her pain and frustration has revealed itself and the room becomes a different being, one more aware of needing to reconcile what we hear on the news and what we see in front of us right now: a woman who has gone through humiliation and suffering to defend her everyday life from sustained oppression, oppression that mainly only ever manifests itself in our lives as a headline in Het Parool or a sound bite on BBC.

Art is healing for them, their activism and its reach appears to be a comfort and Masha’s words highlight this: “The way we see art is that it uncovers the sick points of the state and gets a discussion going about them. It reminds you that what happened to us could happen to you.”

It also appears that we may not have seen the last of the more colorful side of their style of protest: “Me and Nadia have been discussing this a lot; why human rights activities are linked to bureaucratic bullshit. We’re planning to move forward as effectively and possibly as brightly as we did before.”

Masha recalls the protests in Russia in December 2011 that saw tens of thousands of protesters walk the streets of Moscow to demonstrate against allegedly fraudulent election practices. These protests remained relatively peaceful, with protestors releasing balloons and speaking openly to foreign media about what they thought of Putin and how they felt he should resign. This all changed in May of 2012, and Masha mentions the arrests that took place at Bolotnaya Square, where 27 people were arrested, 12 of whom are currently on trial. “Right now these 12 people are on trial and it is much more ugly and stupid than our [trials] were. They are facing a 5-6 year sentence, and are in a court trial that has been going on for over 40 days.” Masha seems genuinely pained whilst saying this, unable to grasp sense in the facts that are in front of her. “This case is not making the news in Europe and this brings a lot of apathy to young people in Russia.”

A member of the audience asks why she and Nadia are focusing on prison reform and not abolition. Masha responds with a stern but passionate answer: “When you sit in prison you fully realize the price of a word, the price of a protest.” She raises a jarring issue; that when she was in prison, if she pointed a visiting human rights worker in the direction of a fellow prisoner, it would “totally break their chance of parole”. “Wet prisons”, she explains, are “controlled by the administration”, and in these prisons, “human rights workers make the plight of these women even worse. Thirty of the women in my last prison, after speaking to me … they went to human rights workers because they were earning $3 per month as a salary. Now these women are in danger, and it was the same situation with [the women who spoke] with Nadia.”

Masha explains the difficulty involved in defining what constitutes a “political prisoner” in Russia: “There are political prisoners in Russia, but they are hard to identify as a category because at first glance it’s hard to see what is political about their crime”. She mentions a female political activist who was sentenced to 9 years for drug-related crimes. The activist is currently being denied insulin, a substance she needs to keep her alive. “If you don’t have very good support from the outside, this is a very typical thing,” says Masha. “You must first be sure you’ll live until the end of your sentence, then you can build a strategy in prison.”

Someone tries to ask Masha about the hunger strikes her and Nadia participated in while imprisoned, but Masha interrupts the question. She informs the crowd that there was a situation that forced them to seek hunger striking as an option: “There are prisoners who cooperate with the [prison] administration, the administration was calling on these prisoners to physically eliminate us.” She tells us what she thinks Putin’s amnesty truly was: “Amnesty? It’s a balloon created by Putin and in fact it is really nothing. I did not want to use this amnesty; we were basically pushed out of prison. Two weeks ago we visited my friends who are still in prison. 1,200 people, and apart from me not one of them has gone free. I didn’t want mercy from Putin, I didn’t want anything from him.”

Talk turns to Pussy Riot’s performance in the Cathedral of Christ the Savior. She comments on Putin’s government and the current closeness of church and state in Russia, insisting that the head of church and head of state are basically one and the same at the moment. She underlines this with the recent news of church leader Patriarch Kirill’s official call for a referendum to criminalize homosexuality.

Masha also mentions Vitaly Milonov, a St. Petersburg lawmaker known for his conservative views. Deputy Milonov has proposed rigid anti-abortion legislation and also legislation making it an offence for “cats to stomp too loudly in apartments. This seems funny,” she adds, “but our legal system works with people like that”.

The audience wants to know how they can help support the causes highlighted by Nadia and Masha. “Prison is a very closed thing, not only in Russia,” says Masha. “This morning we came from Paris, we tried to get into a Paris prison to see how people are being held there, and we failed. More powerful than my words and appeals would be to ask you to look into what’s happening in your own prisons.”

And what will the targets of her activism be from now on? “Putin, the Orthodox Church and prison in the way they exist right now,” she answers without hesitation.

The talk ends on a striking note. Masha asks Peter to help her translate the final thing she perceives to be on her activism list. Peter looks to the audience for assistance. “Non-freedom”, he says, “how do I say this correctly in English?” The Russian word is “nyetsvoboda”, but no one has an answer. Nothing hits the nail on the head quite accurately enough. And it dawns very quickly that there is a reason for this. That as a group we have never needed this term in the same way that many Russians do right now. It may have existed long ago but for our motley crew of Americans, Irish, Dutch and many other nationalities in that room, we cannot match the strength of nyetsvoboda. Masha thinks about this and comes back with her last message: “It’s a system, and the system can only be destroyed by people. This non-freedom is our main enemy.”