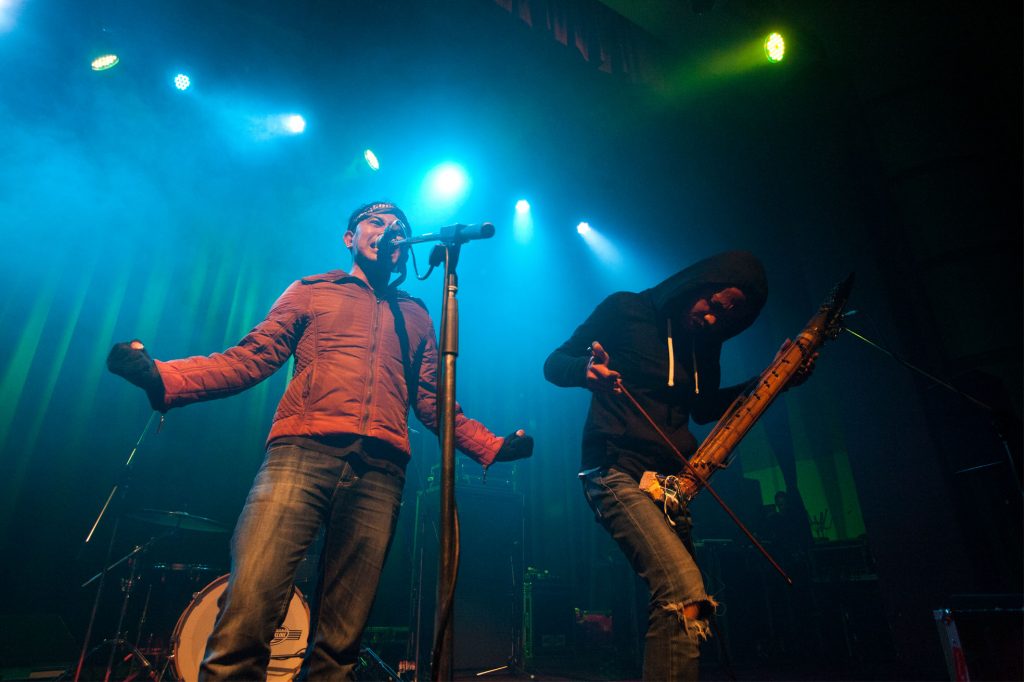 Indonesian duo Senyawa is Rully Shabara on vocals and Wukir Suryadi on instruments that he builds himself. With their experimental music they combine traditional Javanese music with contemporary free jazz and rock.

After touring Indonesia many times, Senyawa played the Melbourne International Jazz Festival and this summer they will go on their first extensive European tour. In an email exchange with KNiK, Rully and Wukir talk sharing music online and what makes a good performance.

The first time you played together was an unpracticed improvisation during a Wok the Rock festival in 2010. Do you remember that first show?

Wukir: It was dark and sweaty. I played bambuwukir [an instrument made of bamboo and strings, named after himself].
Rully: Wukir was playing music with his wife before I was announced to join the stage, and that was the first time I saw him play. We clicked right away and after the show we decided to make an album together. Four days later, we finished recording 6 songs.

What has been your best concert?

Rully: There were so many great ones. And it was always the people’s reaction that made them great. My personal favourite was of course the Overground Melbourne Jazz Fest, which was the first international festival we’ve been to. Nobody’s ever heard of us before and it was a Jazz Festival, people were seated in this big hall. But we got them to stand up and dance. In Sejero Festival in Denmark, we made some girls cry with excitement. In Mona Foma Tasmania, we made little kids force their parents to invite us for lunch at their house. So yeah, those sort of unexpected reactions always make us remember the concerts in a beautiful way.

What is needed for a good performance? Is it the instruments, the enthusiasm of an audience, something else?

Wukir: Totality. Play with your whole body and soul, and you’ve gotta give them with full consciousness.
Rully: For me, you’ve got to send out the right energy while on stage and try to captivate the audience with it. People will definitely sense it and they will send back good energy. When you sense that energy being thrown back at you, you will give back even greater energy. And so on. That’s what makes a great performance. Many failed performances are due to a lack of understanding this concept.

Wukir, when did you make your first instrument, and what was it?

Wukir: It was in elementary school. A one-meter long instrument made out of bottle caps.

Many of your instruments you use both as percussion and to produce tones with. Do you think beforehand about what you’ll be able to play on an instrument, or do you explore the instrument after you’ve made it?

Wukir: It depends on the needs. I don’t think while I make them, I mostly just imagine them.

Of all the instruments you’ve made, which one is your favourite?

Wukir: Garu, Bambu Wukir, Solet, Javanese Hurdy Gurdy, Akar Mahoni (a collaborative instrument in theinstrumentbuildersproject.com), all of them are my favourites, because each of them has its own characteristics.

Rully, what comes first for you, when you perform, the tone or the rhythm of a word?

Rully: When I’ve got words in my mind or written lyrics on my hand, the words will come before the tones. But most of the time we were just improvising when we try to compose songs. That’s when I use rhythm and tones to help me construct the words. I’ve got a bag full of texts that I’ve written as lyrics. I like to write lyrics in my free time and use them when we get together. But sometimes words can be limiting, and that’s when I decide to use vocal sounds as the medium instead of words.

Why did you choose to release your music at Wok the Rock, a label that allows people to download all music for free?

Rully: We like to be part of this era where the internet drives how people choose to get their knowledge, including music. And free downloading is one way of encouraging sharing culture and at the same time distributing our music more effectively without any geographical constraints.

You are involved in education. How does your education stand out in comparison to other music education?

Both have the pluses and minuses. Both of us did not attend any musical schools. And we think it’s better because it becomes a conscious decision whether to commit to making this kind of music as our way of life.

How would you describe your teaching method(s)?

Rully: Senyawa needs to have a space to present music to everybody from anywhere, and use that space to learn, to recognize potential, and to create. And we are always open to any interesting collaborations.

Senyawa will play OCCII July 10th. Check their website for more tour dates: www.senyawa.tumblr.com
Or check out their label: www.woktherock.com