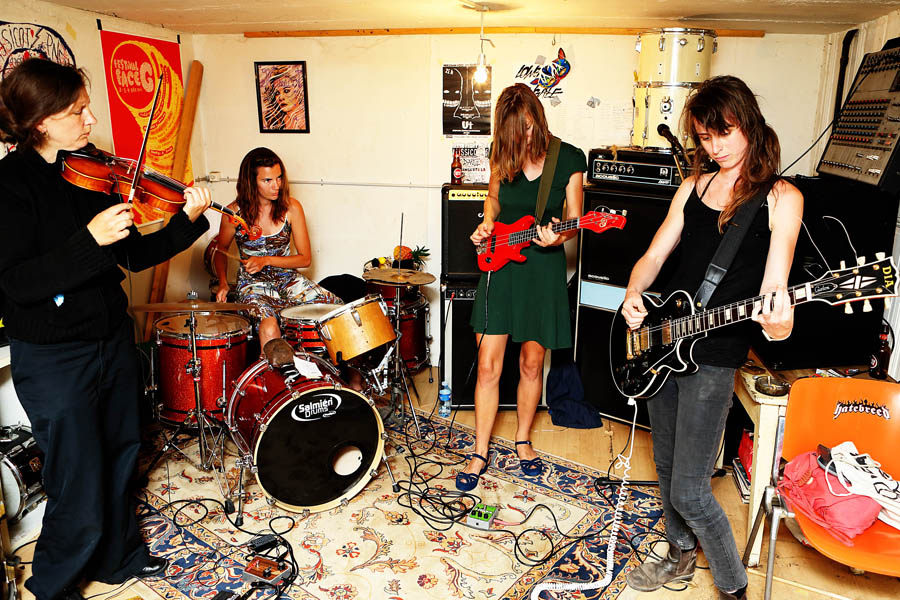 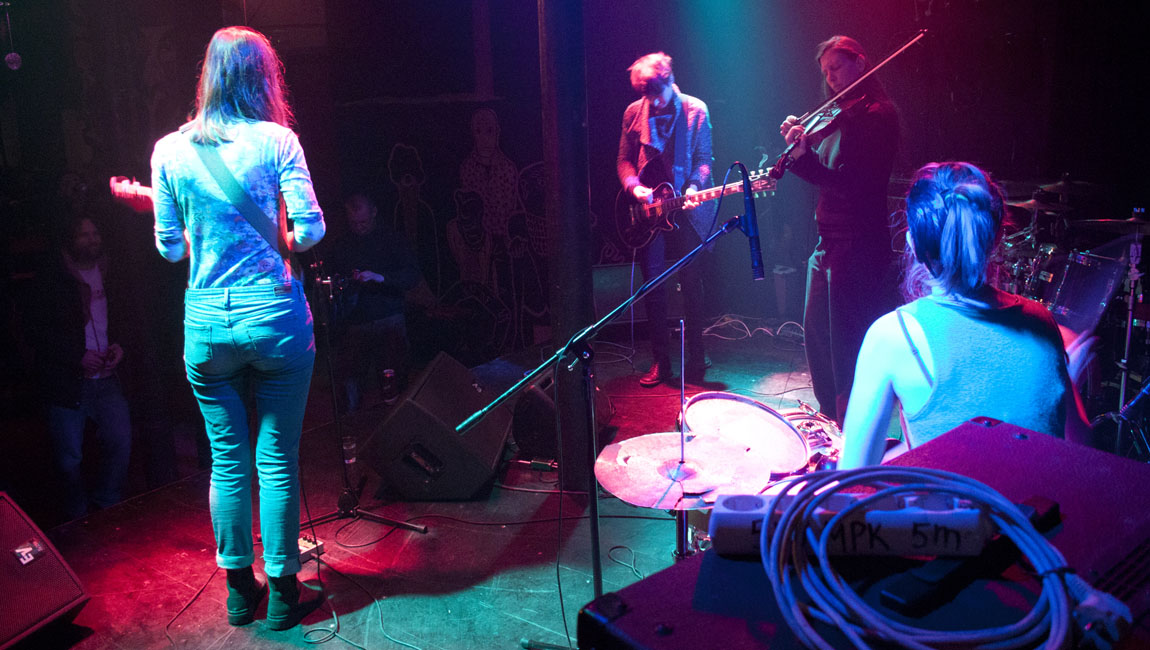 Named after a cutting machine, Massicot is a quartet from Geneva. Since their start in 2009, Massicot has toured Europe frequently, charming many a listener into dancing to their sharp and minimal post punk riffs.

They’ll play SOTU’s last festival day on Sunday April 20th, and we got a chance to exchange emails with Massicot guitarist Simone.

How did Massicot start?

We met by luck… we knew each other from quite different horizons. Colline the drummer and Simone the guitarist knew each other from other bands they played in previously. Simone was on tour when she met Mara the bassist in Berlin. Mara and Colline met in fine art school as students, and we knew Léa, on the violin, from the alternative scene in Geneva. The name Massicot came out of our names…. MAra- SImone-COlline, but turned out to be the perfect name for us because two of us were working a lot with screen printing at the time and we all studied at fine art schools, and a Massicot is a machine you often see and use. Also, the sound of the machine cutting matches our music quite perfectly we think.
Now we all live in Geneva, but two of us are Swiss, one is French and our bassist/singer is from Latvia, that’s also why some of our lyrics are in Latvian.

What was the first show you played together?

Massicot had its first show in 2010 at 6 in the morning at a very nice small summer festival in the forest. Everybody there was on LSD (probably more than 80% of the people). One guy was stuck on the smoke machine and was pushing the button non-stop, so we played with the windows open, but still weren’t able to see each other or our instruments. At the time we didn’t have any songs, it was all improvised. Everybody that was there still remembers that show.

Did you study music?

We are autodidacts with our instruments, and never had lessons with them… the fact is we got old (hahahaha) and had other bands before, so we’ve actually played music for quite a while now… Colline is even teaching music to young children. When you study fine arts, music is always something that is linked I suppose, no?

Could you describe your songwriting process?

We first improvise and after that we build on the things we’ve found that we like… so it’s always all together. Nobody comes to the rehearsal with fixed ideas. Also, when we started Massicot, the idea was to play instruments we hadn’t played before (or very little). That really made Massicot come out with the music we do… minimal and sounding strange. Mara plays a bass that is actually a guitar for kids, with 3 strings. On my guitar, the 6th string was pissing me off so I took it away, after that I changed the tuning. Colline is trying to find very different sounds on the drum and ways to play, and Léa with the violin has her own way to play it that you probably won’t see anywhere else. This makes the composition only possible when we’re together. With these “homemade” instruments we cannot say “Hey, I’m playing an A, could you please play an A with me?”, that just isn’t possible.

What has been your favourite performance? We’ve had great shows, but not always for the same reasons. Last summer we played for “Les Aubes Musicales”. The idea is to play on the beach in the center of Geneva during the sunrise at 6 in the morning. You soundcheck in the dark and then the sun comes out of the mountains above the lake while you’re playing… that ’s unforgettable.  And there’s always a best show on each tour. Last winter in Pisa, last summer in Paris… Sometimes the audience is just too beautiful to be true AND it’s a fair evening to hang out AND there are other good bands playing AND the sound is perfect … Lucky us!
One recent weird situation was when we played in Zurich for a film festival. We had to play a soundtrack for an expressionist film called Genuine, The Tale of a Vampire. There are two versions of it, one of 45 min., on which we practiced and another of almost 2 hours. But there was a mistake at the beginning of the projection so we had to improvise the show on the 2 hours version that we had never seen. The first 10 minutes were total inner panic, but after that it was a lot of fun and quite a challenge!

It’s the perfect time to meet people, and see your project grow wings, with propositions of residences, compilations and whatever…you don’t do much if you stay in a basement doing music, even if you’re the geek guy that spends his life putting his music on the internet. Music is alive and there’s not much to it without sharing live who you are, and what you do. Best is to go out and meet people doing things, who can bring you to do new things and so on. We think that a band really really needs to tour to evolve, getting in touch with what’s going on abroad. Also, after a few days playing every evening, the shows are better and better. It’s a very unique experience and a moment we can focus on music, and nothing else. As we are mostly a live band, touring means a lot.

Is there something you listen to on tour when you’re in a van together?

The Beatles!!! We also all love Orchestra of Spheres… we actually all listen to different types of music, but agree on them.

If there’s anything you could change about the music industry what would it be?

There are lot of ways to avoid the music industry and still do music and tour, so we ourselves don’t really care about the fact that the music industry is a huge shitty business. We aren’t part of it, and are very happy about that. We of course all need to live on something, so that’s where it goes with changing the whole system…but we need a life time for that question.

How do you let each other know about new music, do you send links, do you make mixtapes still?   We actually take playlists and CDs in the van while touring. We have plenty of time to listen to music together. Also, we often go see bands playing. Geneva is quite in the center of Europe, so we are very lucky, and although the city is small, we still have the opportunity to see so many concerts and discover so many bands.

How do you see music developing, are there any new styles in the making?

What we can observe is that rock music is getting more and more open-minded and includes different beats and traditional instruments from everywhere. A good side effect of globalization maybe… We get to discover music from different parts of the world more easily. It isn’t only about the internet and the music business, it’s a general attitude towards other cultures and also towards our own traditional music. People are travelling and bringing back stuff from Africa, Asia, labels like Sublime Frequencies or Mississippi Records are influencing the scene a lot nowadays. Bands also rediscover traditional instruments from their own cultural background.

Are there bands from Geneva that you would recommend? Antioche Kirm, Samsonite Orchestra, Orchestre Tout Puissant Marcel Duchamp, Imperial Tiger Orchestra, OHA AHO and Titi (headache/mossuraya/jmenfous/NNY) is creating a new project now… they don’t have a name yet… but to be followed!!!

Massicot will play SOTU on Sunday April 20th 2014 at OCCII.