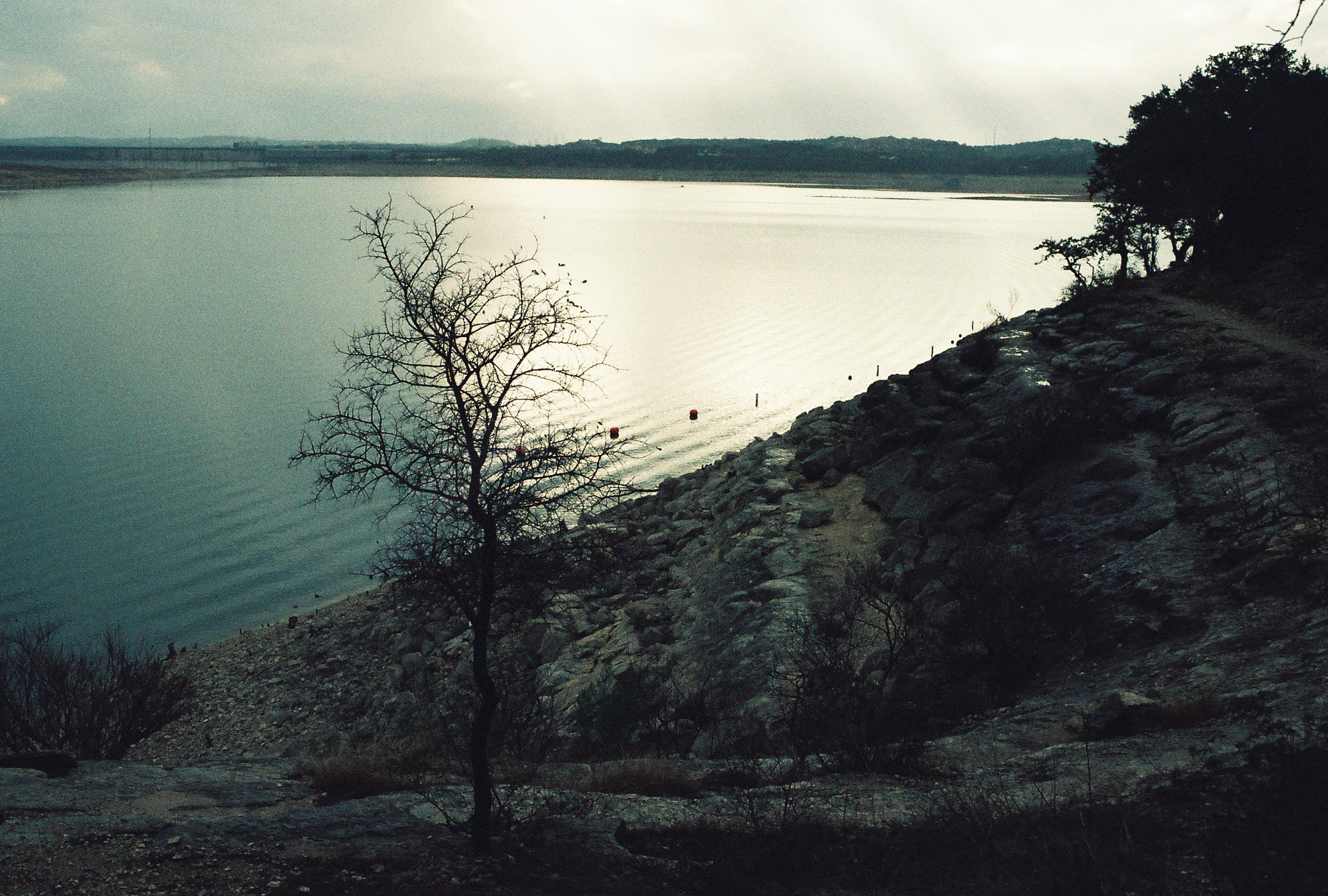 Katherine Oktober Matthews wrote for our tour blog about encounters with strangers that let you escape all context. She goes to a nudist lakeside beach in Austin, Texas, in search of a photo, but leaves with something else instead.
An old man calls over to where I’m sitting on a bench, from around 30 paces away, and asks if I feel like talking. It’s a reasonable enough request – I’m not doing anything but watching the water from up on a hill – though his proposition is made somewhat more ambiguous by the fact that he’s completely naked.

His nakedness is not a problem in and of itself since I am, after all, at Hippie Hollow, a nudist lakeside beach in Austin, but it is made slightly more awkward because we are the only two people present on this particular day (which makes complete sense considering it is winter and also raining) and I am not nude at all. I’m confounded to find an explanation to give to myself, or to you, or to him, as to what I am doing at Hippie Hollow under these conditions, except to say the following: I’ve been travelling around Texas, the state of my birth, for the last three weeks to work on a personal documentary project. I’m here to take pictures.

Naturally, one of the first things I start to consider, as his hairy wrinkled chest and hairless smooth legs take a seat next to me, is if he would eventually allow me to take his picture. Being a woman, however, I automatically run several scenarios of personal safety through my mind. Gauging him for potential violence or psychosis, sizing up his possible strength in overpowering or outrunning me, I decide that he’s relatively harmless and, in his completely naked state, carrying nothing but a small plastic cup, far more vulnerable than I am. And yet, despite this, I’m peripherally aware that this process of threat evaluation continues throughout our conversation. What I do not see coming is the monologue that emerges when I return his question and ask, “And, what about you, why are you here?”

The old man has a slowness to him, not necessarily one of age but of temperament. He’s calm and unassuming, unaffected by the drizzling rain, his bare feet at home among the grass, rocks and roots that cover the hilly terrain. “Well,” he begins slowly, the drawn out introduction to a long story. “It’s a long story.”

“I am an angel,” he continues in a clear voice, an urban Texan drawl. “But I am no different from a rock.”

And he goes on to explain to me the philosophical absurdity of the cosmos and his nonsensical place within such chaotic stardust. Heaven is on Earth, just as the Earth is the heavens. All is equal, all is special. And equally, none of it is.

Now, I know a lot of people would write him off straight away, tell him he’s crazy, make some excuse to leave or try to convince him of some alternate, more readily accessible reality. But, with the beauty of time on my side, I stay. I listen.

And I listen. For around two hours, as the sunset begins to fall over Lake Travis, I listen. And he’s calmly ranting madness, but I don’t think he’s crazy. He’s just giving me an unfiltered version of every dark corner of his mind, and seeing if I show signs of recognition. Am I the sort of person, he seems to wonder without asking anything, who will admit that my mind has dark corners, too? The more he speaks, the more he seems to me like anybody, confused about his significance as a sentient being in a cold and infinite universe. Another person with ideas that nobody cares about, a voice urgently seeking a sympathetic ear.

And part of the laughable disconnected farce of it all is that in the background, I still wonder if that’s what this encounter is really about. Does he really just need someone to talk to, or is this at some point going to become about something else – sex, for example, my mind keeps returning to, if only because I have a naked man sitting next to me and we’re all alone by the lakeside.

At some point, I arrive at an internal decision, should he bring some invitation of sex into the dialogue: No, I am not willing to participate, but I’d be willing to watch, if he wanted to jerk off.

It never comes up though, of course. Perhaps, just as I’m running questions about his intentions through my mind, he’s doing the same: is she really willing to just listen, or is it about something else?

An hour or so into the conversation, I ask if I can take his photo, and he answers by ignoring the question, talking about something else entirely. I’m not an asshole, I don’t try to sneak a shot while he’s not looking, but eventually, as another hour passes, because I am here to take photographs, I take out my camera and capture the view over the water instead. The mood shifts. Now that my camera is in hand, he takes his leave. And I walk in the drizzle back to my rental car, thinking about fair trades.

I leave with a portrait of a sunset instead of a person, but it was still a trade. I’d like to think that he walked away from that bench on the hill feeling richer, though I’ll never know for sure. All I know is that I left with a conversation in my head, the reward of having shut up long enough to hear someone else’s story.

If I wasn’t a photographer, would I still go to a nudist beach on a rainy day in winter? If I wasn’t a writer, would I be open to hearing the sad stories of a stranger? Is it the other way round? If I didn’t do these things, would I feel alive at all?

Regardless of the origin of my desire for travelling, or listening, or existing, there is something irreplaceable about these rare encounters, these brushes with unknown people. I meet them in passing, my fellow lone wolves, roving, people who do not stay to hold my hand for long but still manage to touch it warmly. Just an exchange of energy before moving on, each left to continue the search, alone.

In strangers can sometimes be found kindness and understanding much greater than the dearest of friends. Our families, whose learned gaze finds what it has already come to expect, can look at us without seeing. Lovers, too, are in some matters useless to us, observing our struggles with knowing contempt or exhaustion. In encounters with strangers, escaping all context, we make confessions to each other that promise redemption freed from consequences.

I drive to the next place, some hipster café in the city that seems so far removed from a quiet conversation on a bench that when I arrive, it feels like I’ve been on a long journey. I order a coffee from a barista with a fake smile delivered genuinely, but in that exchange is only the understanding of commerce. It’s consequential.

I think of the old man with smooth legs, and I already have trouble remembering exactly what he looked like. Sitting right next to a person, it’s hard to examine him closely. But, I know what we exchange is this: We speak without owing each other anything, without responsibility for the other’s happiness or stability, and in the best case, in those rare few times, we are reminded of our own worth by the mere fact that someone under no obligation chooses to speak to us, or to listen.

Elsewhere is an extract from an extended work in progress. Katherine Oktober Matthews is a writer and photographer based in Amsterdam.