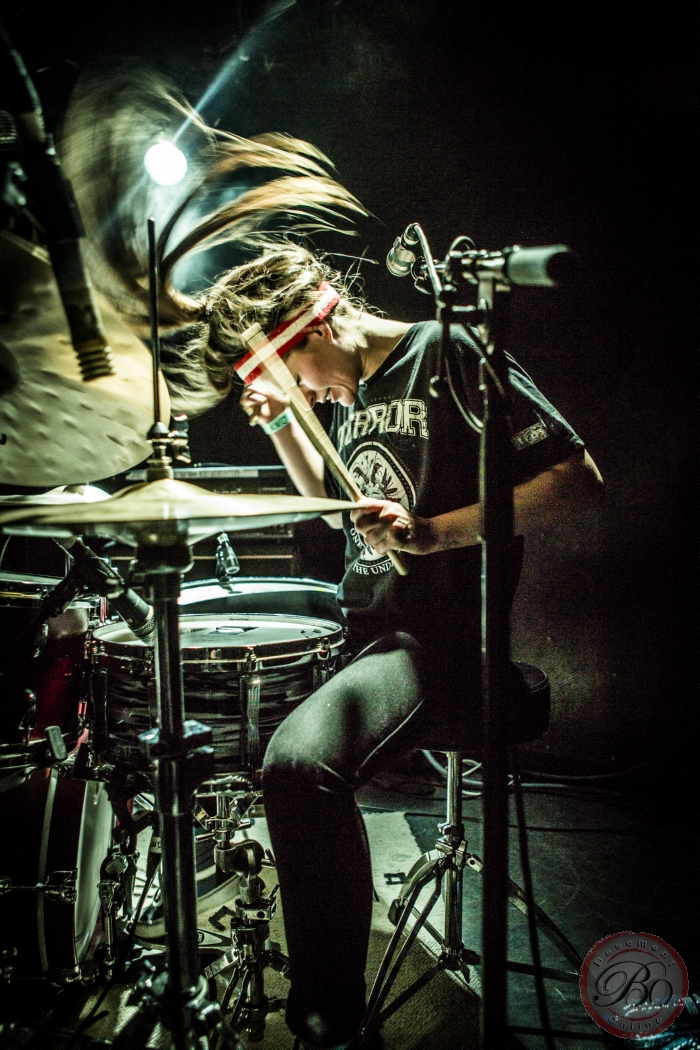 Sarah Wienke, an audio engineering student and volunteer at EKKO in Utrecht, and occasionally at OCCII, explains how to fit three bands’ equipment on a small stage, even when it isn’t possible.

My favorite concerts at the EKKO are those during ‘Shape of Punk to Come’.This is a recurring evening with ‘loud bands’(think: hardcore/punk/metalcore). These evenings are one of the few at the EKKO I always try to either be there or work.

Edition #7 took place last summer and I was lucky to be scheduled in to work as the monitor technician. The lineup was: Employed to Serve (UK), Brutus (BE) & Rolo Tomassi (UK). This time all the bands where female fronted, so even more fun! Usually at concert nights we start to work at 15:00. The sound & light technicians together with the stage manager start preparing everything & building up the stage. Then one by one the bands come in, build up their stuff on the stage and do a sound check.

While building up & sound checking everything went smoothly. Except for the fact that everybody wanted to play on their own gear. Which is understandable. Of course you want to use your own amps and drum kit. But if you’ve ever been to the EKKO you know that we have a really tiny stage! Still we thought we could manage to sort of make it all fit. The first and the last bands where supposed to share a drum kit, which is convenient ‘cause then there’s less stuff to move around. Brutus, who where going to play second, wanted their drum kit on the right side. So we thought we could leave the drum kit of the other bands in the middle and build around it.

But then… Peter, the bass player of Brutus, came with two giant bass amps. We wanted to put them in front of the middle drum kit. However this did not fit. This meant that we had to take the middle drum kit off the stage after all.

So… a lot of work in a very short period of time (usually we have around 30 minutes for a changeover). Nevertheless, with good planning, notes & labeling it all worked out in the end. And most important: the shows were awesome! Brutus was my absolute favorite. Stefanie’s drumming, singing and totally going for it was really great to watch & listen to!

After the shows we got a lot of positive remarks from the bands. Which is always nice! As a monitor tech you’re really working for the band, to make them hear themselves well and feel comfortable on stage. So getting positive feedback after a show is always great so you know you did not completely fuck up ;).

During the F-Word Festival, which will take place at OCCII October 2-4, Sarah will host the workshop Live Sound For Beginners on October 4th.