Wolvon is a noise rock trio from Groningen. They are currently playing shows to promote their new EP bother. Wolvon’s bass player Ruben van Walraven wrote for our tour blog about their worst gigs, making friends with border patrols, and touring the Balkans.

With WOLVON we have only done three short tours so far, and they all brought me to countries I’d never visited before. The first one to the Balkans, where we played shows in Serbia, Macedonia and Kosovo. We were supposed to play two more in Bosnia but unfortunately those never happened, this had something to do with electrocution but we told that story too often already. All three tours involved ups and downs, and all of them involved meeting new and exciting people. Sometimes such encounters happen when you least expect it. Actually on one of the worst gigs we played, we met someone who booked us our coolest show in the UK so far.

This shit-gig was in London, we were booked on a night with some other UK bands, including a London-based one with a shitload of Facebook likes. Moneywise the deal was 70% after break-even. A great deal if you ask me (afterwards we wanted to punch ourselves for believing it). After turning up for the show we learned the London based band cancelled the gig (probably had something to to with the deal) so it was just us and some other bands, no locals. Furthermore, the deal was 70% after break-even per band. So everyone who turned up had to tell the promoter which band they came for. Result was, the promoter made money, the bands didn’t and no locals were booked, so no one turned up. There’s even more filth to spill over this gig but I won’t bore you with it. Eventually we played for three people, two friends of ours from Ice, Sea Dead People (great band!) and a girl who was a bartender there. She turned out to be a promoter in a very cool venue and we built our next UK tour around the show she booked for us. So playing the shittiest gig can get you your coolest gig, you just have to dive in I guess. We’re going back there again June 14th and we’re really looking forward to it.

The tour in the Balkans was more of an adventure travel wise. Long distances and difficult borders made it more of an endurance tour than the UK tours. We had to bribe our way across some borders, had to drop our pants because Bram thought it was a good idea to bring organic shampoo (which I myself could confuse for hashish and I’ve consumed my share of the product so it’s hard to blame a Serbian border official). After finding the shrink foil wrapped organic hair product everything looked suspicious. Try to explain a lost-somewhere-in-your-backpack-Fisherman-Friends-tablet without the use of a shared language. Ah well, me and the guy eventually sort of became friends, he almost let me fire his gun but it would upset his superiors so yeah, better not then. 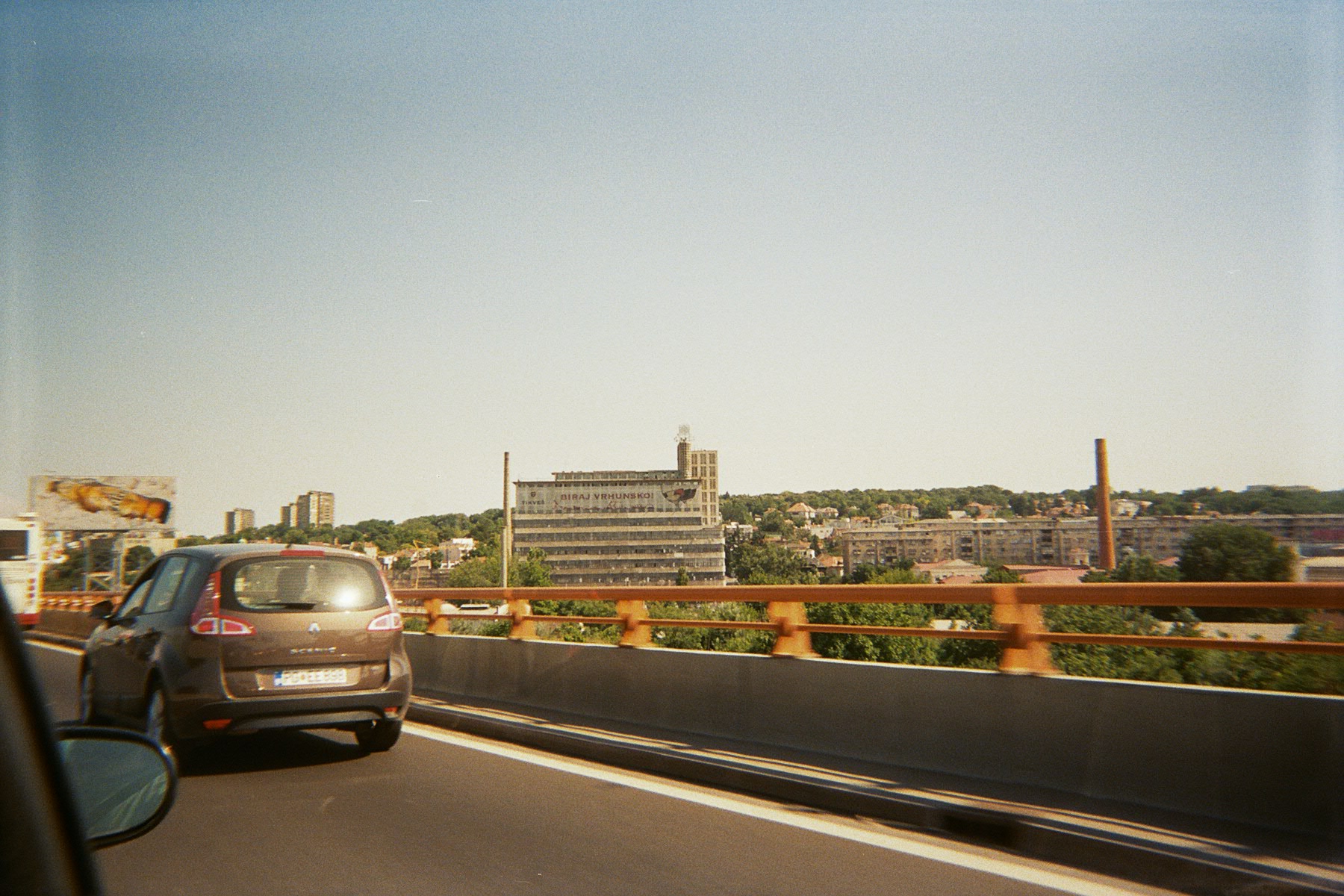 BIGZ as seen from the highway

But I was talking about meeting new people. In Belgrade we met, amongst a bunch of other cool people, Boris, the guitarist from Repetitor, at our show in The Gun Club (which really is a gun club during the day and a music club at night). We played our first show on the Balkan tour there, kind of a hard one after driving two days through the heat. But we made it and it wasn’t all that bad, or so we heard. So we met Boris through our host Ilija and after the show we went to their rehearsal room in a vast abandoned building in the middle of Belgrade called BIGZ. We had a good time, listened to music, drank some beer and eventually we saw the sun come up above Belgrade, which was a beautiful site from the upper floor of BIGZ. Meeting Boris will lead back to OCCII, because months later Repetitor came to The Netherlands and we helped out a bit with their tour, which was set up by Koen ter Heegde from Subroutine Records. They played in our own venue in Groningen (Lepel Concerts) and we supported them in PopEi and OCCII where they played one of the best sets I’ve seen them play.

All these things deriving from chance encounters are what makes touring so cool. Together with being on the road with your band, getting to places you’ve never been before and getting new people to hear your music. I can see why people experience post-tour-depression. I’m already looking forward to the next one.

If you want learn more about our Balkan tour, organic shampoo and why our Bosnia gigs didn’t happen, you can read all about it in this tour blog Bram wrote for Incendiary magazine.

Thanks for your time! I’m off, if you read this on time you can check us out this Wednesday, June 4th, in OT301, we’ll be having our EP-presentation there together with Nouveau Vélo and Tijger Salto. See you there! Cheers!