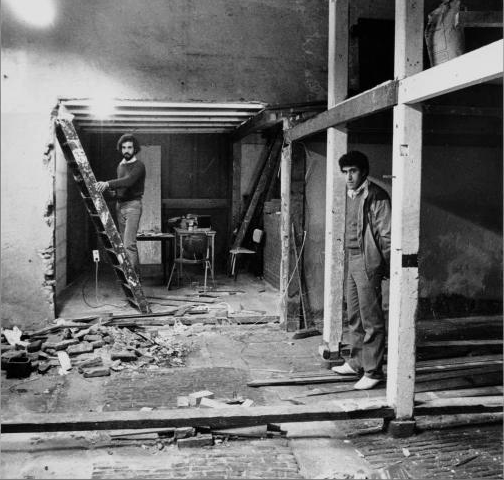 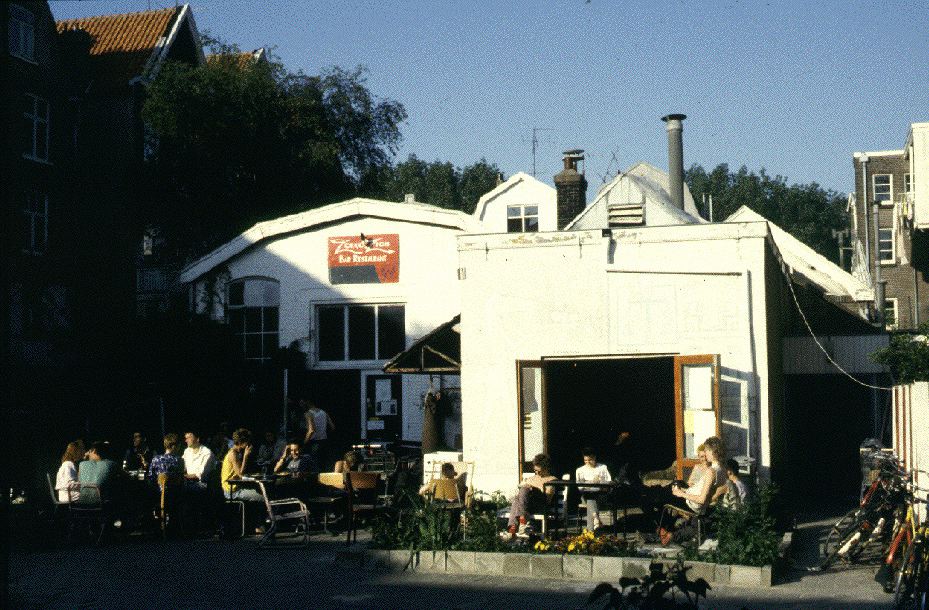 In 1984 when a large squat in the centre of Amsterdam was going to be evicted, the squatting movement decided to devote a day to ‘squatting back’ as many buildings as possible. One group squatted 14-16 Schinkelstraat, now known as the Binnenpret

: a space with, among other things, restaurant MKZ, practice rooms for musicians, a library and the venue OCCII with its entrance on Amstelveenseweg. Next weekend Binnenpret celebrates its thirtieth birthday. Meyndert and Emmy who were there from day one, tell about the thrills of squatting, endless rebuilds, and the secret of a squatted space.

“It was squatted at 7 at night, I believe,” Meyndert says, “ and on February 10th, it was dark already at this time. I lived in the neighbourhood in a squat at the Postjeskade and I met someone on the street who said ‘That was a great squat!’, so I asked ‘Which squat?’ I went there right away!”

Meyndert and Emmy drink cherry juice and smoke tobacco in the Bollox, a coffee bar and library in the garden of the Binnenpret. Thirty years after the squat they’re still active at the Binnenpret. Meyndert has lived here for almost thirty years, and Emmy works at the Bollox and takes care of “the surroundings” as she calls it: “Taking empty bottles and paper to the recycling, and making sure that there are candles, the kind of things that you easily forget.” Even though Emmy first has to clean and finish some things, they feel like doing an interview – “with grandpa and grandma of the Binnenpret,” Meyndert chuckles. 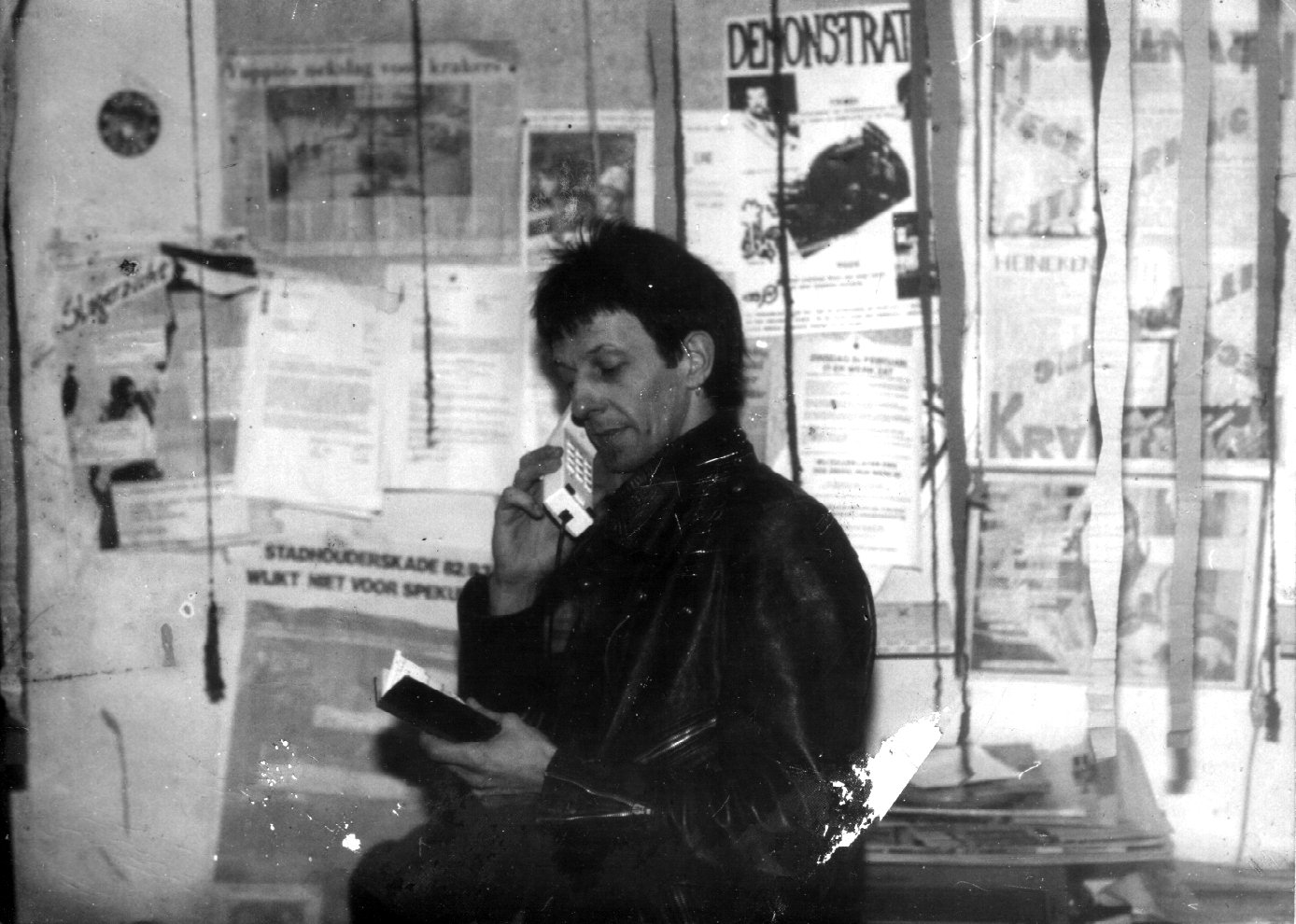 The Binnenpret was squatted on February 10th, 1984, on the “Day of Unrest,” as the squatting movement calls it. On this Friday a large number of new places were squatted in the Netherlands. This wave of squats was a reaction to the planned eviction of the extensive Wijers squat on the Nieuwezijds Voorburgwal.

Emmy doesn’t remember how the squat went exactly, there were so many during that period and can’t tell them apart anymore. “You enter a squat and make a schedule with the people that are there, then you go home and get bedclothes. At night you get together again and then you drink and you chat.” “A lot,” Meyndert adds, “the Binnenpret was built on alcohol those first years!”Soon it became clear that Binnenpret squat was quite special, especially because of the possibility to go to many different directions in one place: a restaurant, a children’s theatre, practice spaces, and even a venue. “After you squat a place” says Meyndert, “you walk around a bit, you want to take a look everywhere. That’s the thrill of squatting: you enter a new space and your creativity rises. This way we discovered there was another building that went all the way to the Amstelveenseweg. We spontaneously squatted it too. It became the venue OCCII.” “Because Wijers was going to be evicted a few days later,” adds Emmy, “we at the Binnenpret said: ‘Move your sauna and your shop and whatever to the Binnenpret.’ It was fully booked soon.” 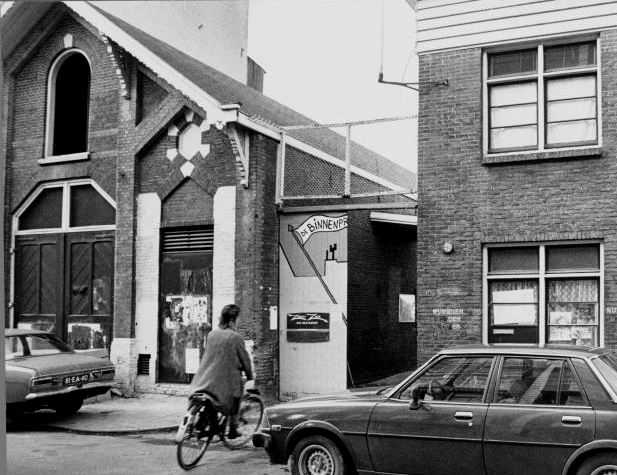 That first period went remarkably easy, without conflicts or thugs that were sent by an angry landlord. “We had daily meetings,” Emmy says. “We were in contact with the municipality of the neighbourhood.” “The fact that the municipality owned the place gave us the advantage that there were no visits from thugs,” Meyndert adds. “From the first days we had a day care for toddlers, so it was that safe.”

“That period was very different anyway,” Emmy says. “For such a small neighbourhood there were a lot of squats. In every street there was one. “The squatters’ consultation hour was even organised together with the community centre back then,” says Meyndert, “the community centre in turn made sure that the neighbourhood would profit from your squat. So we had a Moroccan youth centre in the Binnenpret, and the day care for toddlers was their initiative too.” But besides the social function squatting had back then, it was most of all fun, Emmy and Meyndert think. “There was a vacant cinema in the Schinkelbuurt area,” Meyndert says, “that was squatted, Victoria. It gave the neighbourhood a boost because that was where the parties were. It was an anarchist mess, but it was beautiful.” 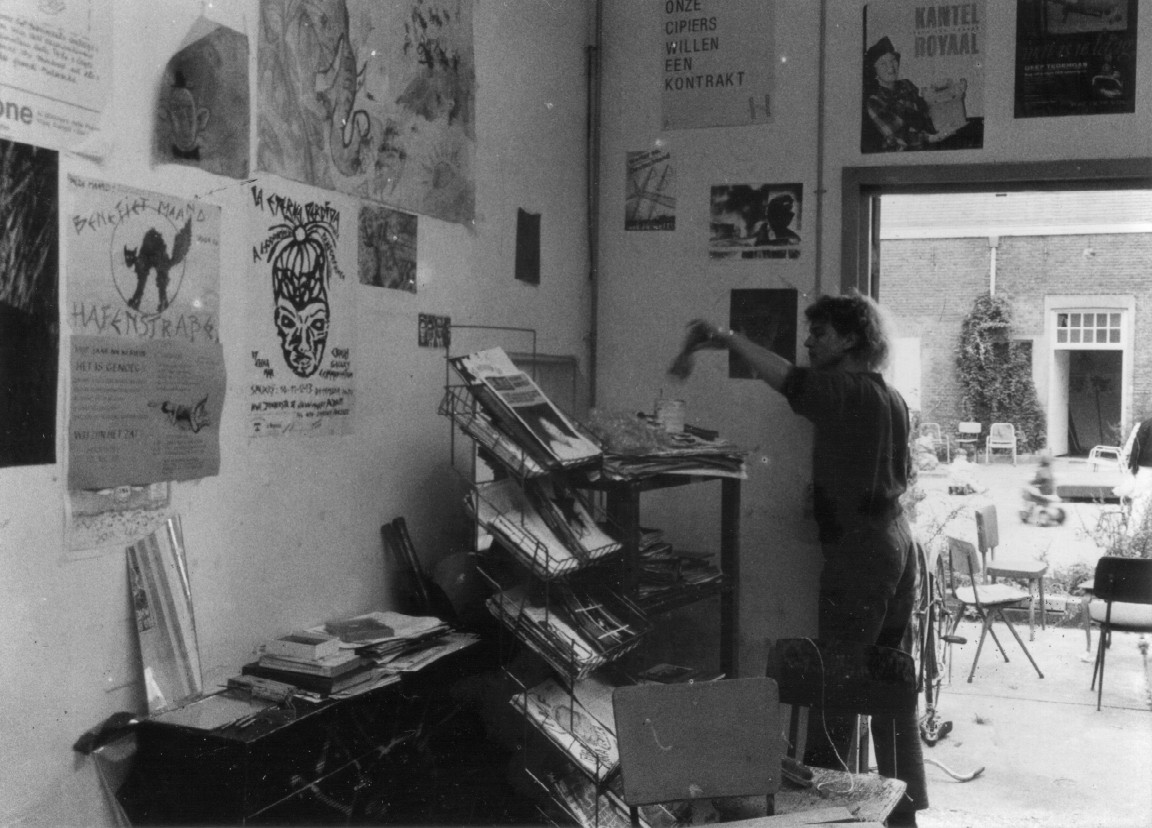 Emmy and Meyndert originally came to Amsterdam especially to squat. “The riots around the Vondelstraat impressed me,” Meyndert says. “I still lived in Haarlem and saw it on TV. After those riots there was no stopping the squatters anymore. Suddenly people were squatting everywhere, especially in Amsterdam. I, too, took my sleeping bag and went to Amsterdam.”

“I lived in Noordwijk and was part of the local squatting scene,” Emmy says. “Well, scene… it was probably six to ten people. In Amsterdam there were already thousands of squatters. One of my colleagues had a brother who was active in the Amsterdam scene. She often took me there. At one point I was more in Amsterdam than in Noordwijk, so I moved.”

“It was possible to be a fulltime activist back then,” Emmy continues. “Every day there was something to do. You either helped out in the neighbourhood, or helped with a squat or occupation to prevent eviction. You demonstrated, you cooked. And most of all, you were building.” 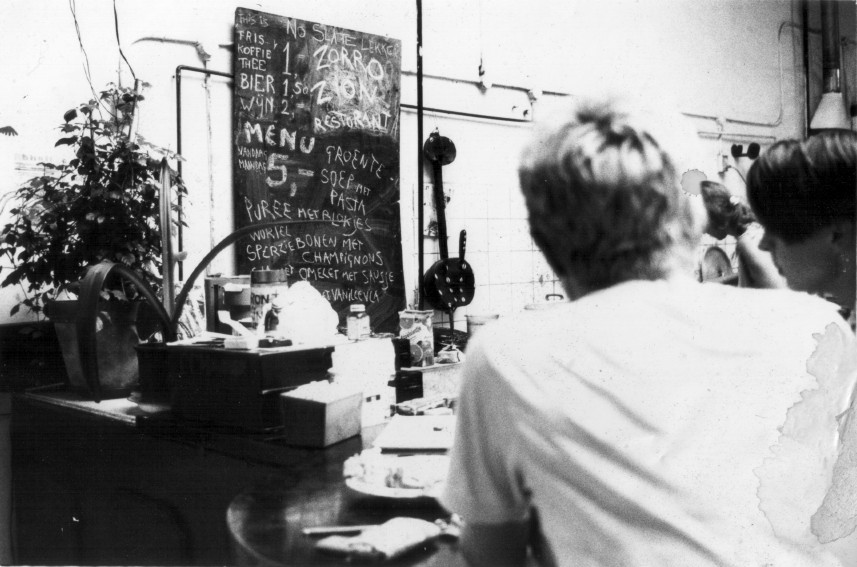 “Building was quite extreme,” Meyndert says. “Whenever you looked around in the Binnenpret there was something to do. But we had fun too. We built with whatever materials we found on the streets. We often got spare materials from other squats or from demolition companies. At first you build rudimentarily, and after a while you use real building boards with wood in between. The Binnenpret is actually rebuild after rebuild. In fact that has almost been our undoing a few times, arriving at a point where you don’t know at all where all the pipes went. They looked like spaghetti.”

In the end, all of the rebuilding made it possible for artists and activists to meet in a squat that was flexible enough to host a wide variety of initiatives. Whether it was a political festival, children’s theatre, or a rehearsal with a new band, there was room for it, and it hardly cost any money. According to Meyndert the secret to a well functioning alternative space is still squatting: “If you obtain a building in a legal way, then you’ll need a business plan, which means you need money first. Then you’ll have to present floor plans, estimates of all sorts, those kinds of things. In the way we did it here, you worked with whatever you found, often with the help of neighbours. It regularly occurred that you’d wake up in the morning and there would be a whole pile of building plates stacked against the wall. People offered us all kinds of things.”

According to Emmy there is another secret: patience. “If you just execute plans without informing others it goes against the grain. You have to pay attention. If you have plans, you should consider others.” “In such spaces you often work together,” Meyndert adds, “so I’ve learnt to sometimes take a few steps back. It happened more than once that you think, ‘we won’t reach an agreement, let’s talk about it again later.’ Then you take a walk in the Vondelpark.”

While there were still thousands of squatters in the eighties, in 2014 the amount is only a fraction of what it once was. The ban on squatting in 2011 led to a large number of evictions. So, are these veteran squatters concerned about the disappearance of many squats? “In Amsterdam’s race to lure tourists,” Emmy says, “the city is transforming into a safe and clean-looking place. If the Vrankrijk [a legalised squat in the centre of Amsterdam] could be evicted, the government would do so. But they can’t because the building was actually bought. Now, if you start a new squat, you can only stay for a few months max, until the next eviction round. But concerned… I’m concerned about something that is much more far-reaching than our own little scene: the crisis that was caused by large banks, and that everybody is now paying for. It takes away from social projects. The most scandalous thing is that those guys just got away with it. It’s super annoying.”
“Being concerned is not really my attitude.” Meyndert says, “I’m quite optimistic, like a hippie. I believe in communication. The way children communicate with their parents nowadays is so different from how we were expected to interact with ours. My parents’ generation, let’s say 80, 90 and deceased, they simply didn’t communicate. They spoke in slogans, from their political conviction, or their religion. Everything was laid out in advance, and that has changed now. In the end I think that the rise of communication that we started can help find solutions for the bigger problems. A lot has to be done still, but I often think: we live in the best time ever.”

The Binnenpret has a leasehold contract with the municipality until 2023. “We rent the land,” Meyndert explains, “and we own the building, which we also maintain. This means that we cannot sell the land, which is a good thing, because this way nobody can rebuild the place and then throw people out to sell it.”
Do they often think about how things will be after 2023? “Well,” says Meyndert, “we’re here, so we’re already something to be reckoned with. The Binnenpret is like an octopus, its tentacles go in many directions, with every initiative here having contacts with other groups outside of the Binnenpret. We have a function in society, and I’m pretty sure that will stay.” 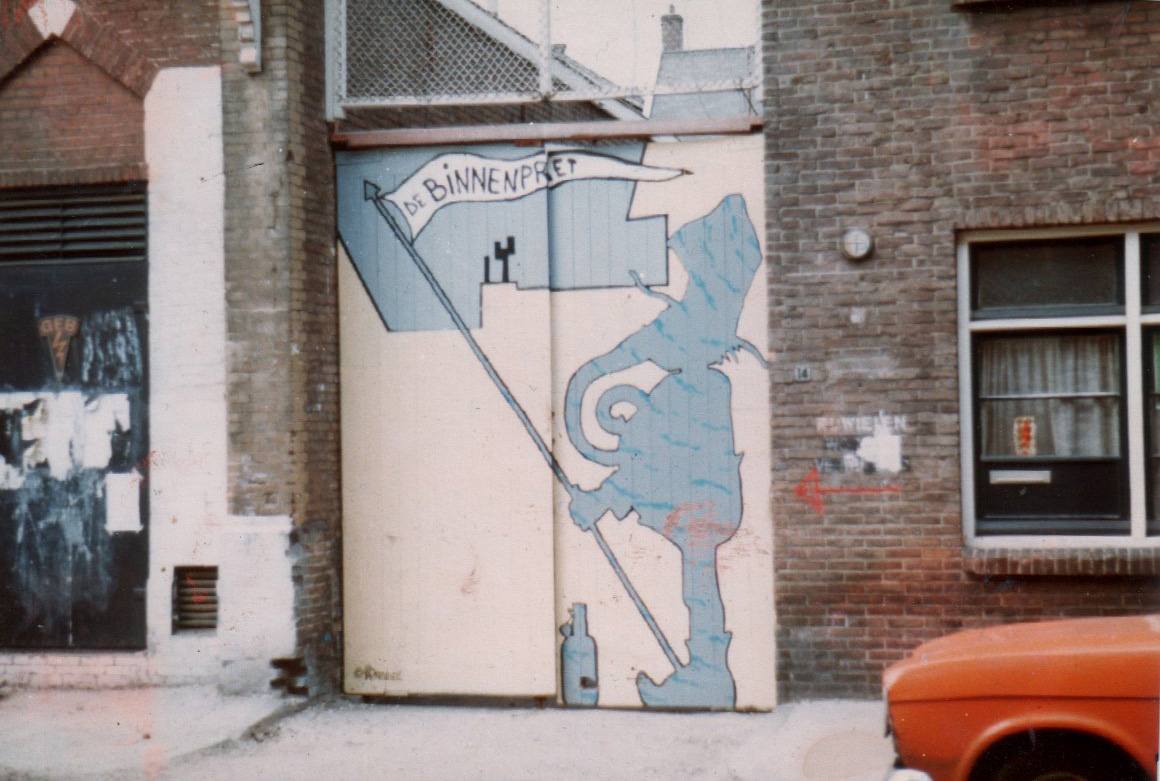 “You constantly see that things pass,” Emmy says, “history consists of waves. The sixties, seventies and eighties were pretty leftwing, but then Lubbers came [Dutch prime minister from ‘82-‘94] and the wall fell and the motto became: scramble scramble scramble. I hope that by now we have started going in the other direction again.”

If indeed better times are ahead for small social initiatives, then the old squatter’s mentality, that never really went away in the Binnenpret never, might also not seem that outdated anymore. “If you squat something and you abide, and don’t do anything until you know how long you can stay, it leaves me flabbergasted,” Meyndert says, while he rolls a cigarette for later,“Then I think: ‘Great guys, just sit back and wait. No, you should make sure you make a place your own while you’re there.”

The Binnenpret celebrates its 30th birthday on February 15th at OCCII. There will be shows, DJs and it is also a benefit for Stichting Theaterstraat. See the full schedule here.