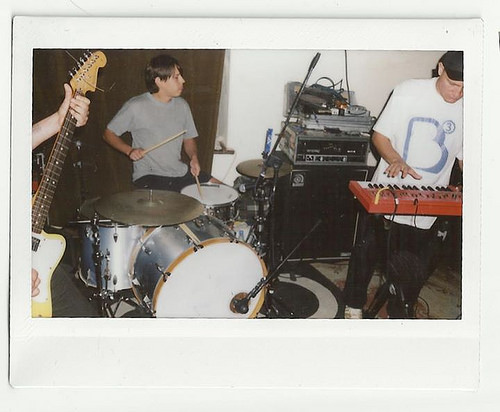 The Kurws are an experimental rock band from Wrocław, Poland. Since they formed in 2008 they have released more than 10 albums and cassettes, and have toured Europe extensively. On April 17th they will play OCCII during SOTU Festival.

We spoke with The Kurws about discipline, seeing your bandmates (too) often and the thrill of touring.

We connect on Skype just after rehearsal. The Kurws’s practice space is part of the social centre CRK where they all volunteer and put on shows. “The CRK always was a meeting point for us as a band,” Hubert says. The Kurws’s core members David, Hubert and Kuba all gathered around Dawid’s computer. “The venue has a gallery, a concert room, a screen print studio and a café,” Dawid explains.

And a ping pong table? Didn’t you guys decide to start a band while you were playing ping pong?

Hubert: We wanted to start a band together for a long time, but we were always busy. Then one day we didn’t have any duties, like cooking or taking care of a band or show, and we were just playing ping pong. And then we thought: why don’t we rehearse together?

Kuba: The difficulty then was that we all played guitar. We didn’t want to be a guitar trio, so we had to decide who was going to learn a new instrument.

Hubert: It also meant we had to borrow our instruments from other people.

Kuba: When we got it all sorted out, we soon started practicing 4 to 5 times a week.

That’s quite a commitment. Do you ever see any other friends?

Dawid: (laughs) No! We don’t have any other friends.

Kuba: Sometimes we play with other people. But that always turns into collaborations rather than new bandmembers. With the three of us we have a strong discipline. In the beginning Hubert and I couldn’t keep up with it, so we would come two hours later to the practice room than Dawid. But now we actually like this structure, we just like to practice a lot.

So you meet almost everyday. Would you recommend it to other bands?

Hubert: I guess that it works because we aren’t overwhelming each other. We’re very relaxed. So if it’s too much, then we’ll only do a short rehearsal. Or we do something else. We’re flexible with each other.

Dawid: We’re learning more and more to control the situation, so that the only thing that can go wrong is our own mood. We always try to play a decent show even if everything is against us.
How do you do that?
Hubert: The most important thing is that we play on our own equipment, so that we aren’t depending on the PA, or at least not entirely.

Dawid: If it still goes wrong, we just try to have fun.

How did you come up with the name The Kurws?

Dawid: The bandname was invented by Max Tundra, the English multi-instrumentalist. I was organising a few shows for him in Poland and Slovakia. We were driving around the country and talking about all kinds of things. Max had heard the word “kurwa” many times by then, because Polish people use it a lot.

Hubert: When people come to Poland they often ask: why are you using that word all the time? It happens that people use the word several times in one sentence. Sometimes you use it when you’re happy, sometimes when you’re angry, but it doesn’t mean anything. It’s like ‘fuck’ in English. It used to be an insult, but now people use it for everything. It’s a very open word.

Dawid: So Max suddenly said ‘The Kurws’. He suggested we call our band like that, and we did.

Kuba: we don’t have lyrics, so they can’t be political. I would say that the music happens in a rehearsal space that is political, and by musicians who are political.

Hubert: The relations within the band are political too. We work without any hierarchies, that’s very important to us.

What is the best thing about touring for you?

Hubert: Meeting people, seeing amazing places, getting to know about socio-economical and political contexts. But also the challenge to perform in different circumstances. All that makes touring a really rich experience.

Kuba: Being confronted with different surroundings, with different people. The different contexts in which your music or attitude can be understood, makes touring special.

Hubert: Also having the opportunity to play each day. You get better and better, you’re really being trained. You get tired, sure, but you also learn to be more flexible.

Kuba: Sleeping conditions aren’t always good, and also you’re in a noisy room every day for a few hours. That isn’t necessarily good for your body. 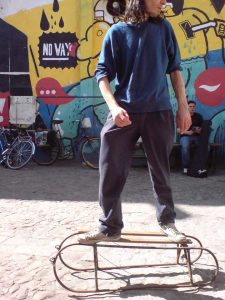 Do you have any particular listening habits in the van?

Kuba: That’s a good question [the others laugh]. I think we’re more and more developing democracy and peace within the band, but in relation to listening together in the van, it’s WAR. We have really different tastes. Some people want to listen to very loud music, other people don’t want to listen to anything at all.

Dawid: But I’m the master of the radio because I’m the driver.

Kuba: Funnliy enough, the music that’s closest to what we are doing, doesn’t work in a van. You hear the sound of the car on the road, and that doesn’t mix with all kinds of music. Usually electronic music works best in the car.

What was the most exciting thing Kurws ever did?

Kuba: Once we took part in a circus festival in Ludwin. That experience was very interesting. Since we were supporting circus artists, we had to include a narrative into the show, which was quite different from just playing songs. And we played two shows a day. There was no time for a broken string or going to the toilet.

Hubert: I remember this show we once played with friends in Poznan. Right at the start of the show the police showed up and said that we couldn’t continue the show. So the owner of the venue came to us and said: “Sorry you can’t play.” And we said, “OK, no problem.” But then people started joking about playing silent music. So we decided to put sheets on the drums, turn the amps really low, and put a sock in the saxophone. Then we played the entire rest of the show very quietly. When people talked, that sounded even louder than our instruments. It was a whole new experience, and I can’t wait to use it in production and new songs.

Find out more about The Kurws on their website

A shorter version of this article was also published in the 2015 SOTU Newspaper.