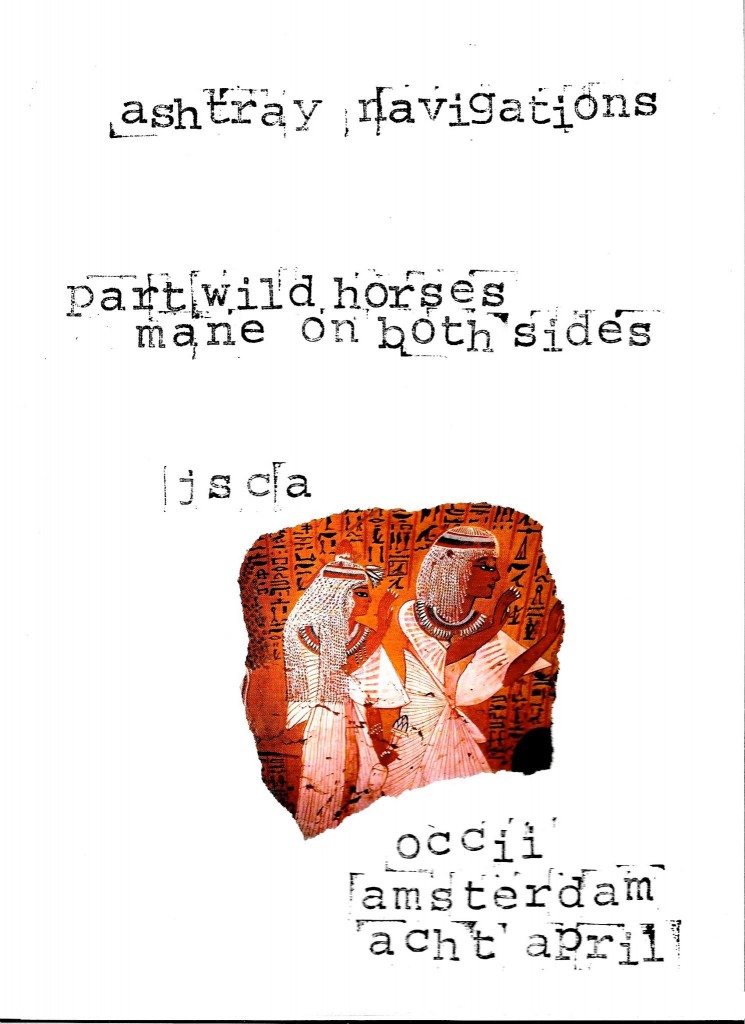 ASHTRAY NAVIGATIONS !
Long-running Leeds-based psychedelic duo Ashtray Navigations had a year in the sun in 2015 with a Wire front cover appearance and a widely acclaimed CD/LP set on VHF Records called “A Shimmering Replica”. 2016 will see the release of the much-delayed “Greatest Imaginary Hits” retrospective box set and an all new album on Blackest Ever Black records. Expect thundering rhythms, mind-melting synth pulsations and convulsive guitar frenzy from the live duo of Phil Todd and Melanie O’Dubhshlaine.

PART WILD HORSES MANE ON BOTH SIDES !
Manchester based improvisational duo of Kelly Jones (flute, tapes, electronics) and Pascal Nichols (percussion and other devices) They have released limited run editions on cassette, vinyl and CD via their own Rayon Recs imprint, Singing Knives, Chocolate Monk, Carnivals and MIE, Beniffer and with a forthcoming release scheduled on Golden Lab records and Folklore Tapes. Among many projects they have collaborated with Singing Knives, Ben Knight, These Feathers Have Plumes, Yoni Silver, Poot, Rob Lye, Pelt and Michael Morley of the Dead C as Pelt Part Wild Gate, and with Ashtray Navigations as Human Horses

“With over a hundred releases and twenty years under its belt, Phil Todd’s Ashtray Navigations remains one of British psychedelia’s most potent secret weapons. Initially from Stoke-on-Trent, Todd became a mainstay of Leeds’ small DIY freakscene, collaborating with Sunroof! and Vibracathedral Orchestra amongst others, but he saves the best for the homebrew musical echo-chamber-cum-orgone-accumulator that is Ashtray Navigations. Early solo works like Hands Under Water Reaching For Nothing and A Mayflower Garland, built up around scratchy, abstract loops and layers of fuzzy-tongued guitar, feel speculative and exploratory, while more recent material like Cloud Come Cadaver and Abomination, which pile bluesy, ecstatic raga riffing onto gooey electronics and cascading synths, see him steering the crystal ship with ever greater confidence and bravado. The effects are often wondrous and always uplifting, the sound of Master Wilburn Burchette jamming with Moebius and Rodelius at their pastoral hideaway in Forst.
A joyous melodic sensibility underpins all the sounds in the Ashtray continuum and, while tracks are invariably loose enough to make a slime mould feel uptight, unlike some self-releasers the quality bar is set high. Sadly Ashtray live shows, for which Todd is usually accompanied by Melanie Crowley on electronics, are something of a rarity, but be sure to soak them up any chance you get”. Mark Pilkington, The Quietus

“This is music stripped free of song into a perpetual crescendo by someone who loves music so much, he has to destroy it so no one else can have it. Welcome to the psychedelic mess that is Phil Todd and Ashtray Navigations’ universe.” – Alex Neilson, The Wire

“Music in order to you begin your day all joy!” – Tileskopio