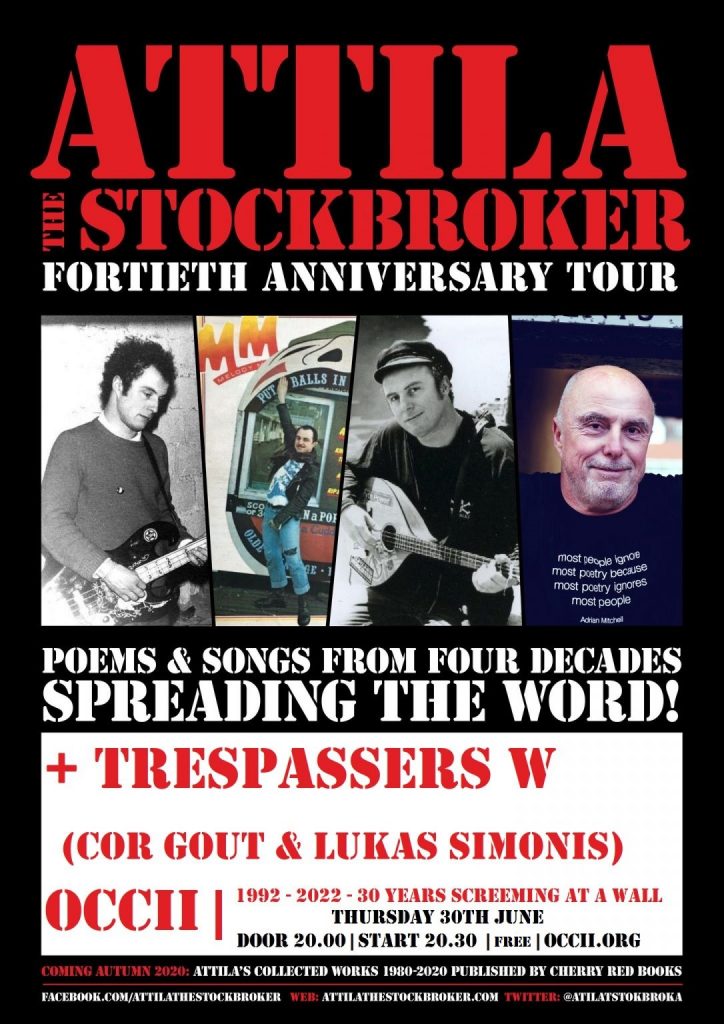 Songs, dub poetry and spoken word from Attila and musical performance poetry from Trespassers W. Celebrating 40 years of being Attila and 30 years of OCCii screemin’ at a Wall!!!

ATTILA THE STOCKBROKER (UK Poet Laureate) celebrating 40 years of being Attila!
Punk poet, dub ranter, singer-songwriter, early music punk pioneer (Barnstormer 1649), writer and social commentator.
Launched into public consciousness by legendary Radio One DJ John Peel in 1982/83, he has spent 40 years touring the world as a self sustaining DIY one man cottage industry, performing well over 3000 gigs in 24 countries and releasing 40 LPs/EPs/CDs and 7 books of poetry.

“Be wonderful to play there again. I still have a following you know”. 😊

After 2006, when The Noble Folly of rock’n’roll saw the light of day, we all thought that this cd, volume three of the series Sex and Drugs and Rock’n’roll, was Trespassers W’s swansong. Individual members chose their own path and singer Cor Gout intensified his career as a writer of poetry, short stories, essays and (in 2021) a novel. Being the musician that he is, he surrounded some of his books with music: ‘Muziek in zwart wit’ (Music in black and white) illustrated the interviews with Dutch jazz-musicians from the thirties, forties and fifties with songs, performed bij John and Annelies van Markwijk, Ab Bol, former Trespassers W-drummer Peter Bos and Cor Gout, that had made these old jazz-celebrities famous.
His short stories and poems about his home town The Hague were extended with songs, poems and cabaret, performed by John van Markwijk, Peter Bos and Cor Gout under the moniker of Gekruld Haags (Curly Hague).*

But blood appeared to be thicker than water, and in 2014 Trespassers W rose from its ashes with the one-sided lp One Sided Love Affair (2014), followed by the 7” Stowaway ep (2016) and the cd Ferrageau, an epic poem written by Cor Gout and put to music by Lukas Simonis and Frans Friederich, which Trespassers W released under the name of Trireem (2020). And, believe it or not, in our awkward corona days they managed to record a new lp/cd – in the Trespassers W-tradition a concept lp/cd –, called ‘Koala and other Metamorphoses’.
Let’s conclude this press release by establishing that since 2006 Trespassers W metamorphosed several times, but in these recreations de band never disappeared. On the contrary: it changed back into the elusive band it always had been.

ATTILA THE STOCKBROKER, COR GOUT, G.W. SOK, Gert-Jan Prins, LUKAS SIMONIS, TRESPASSERS W
Bookings are closed for this event. 70 tickets will be sold at the door 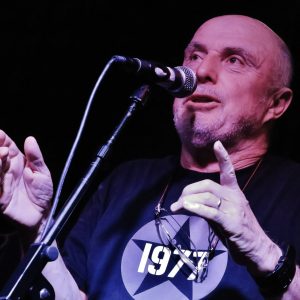 The punk/dub performance poetry veteran stops off at OCCii as he traverses Europe, bringing his unmistakable brand of sharp-tongued, high energy, social surrealism. His themes are topical, his words hard-hitting, his politics unashamedly radical, but Attila will make you roar with laughter as well as seethe with anger.
‘Whether he’s ranting a poem or bashing out a song, there is something magnificent about Attila in full flight’
(Ian McMillan BBC Radio 4).
Posted in Rock