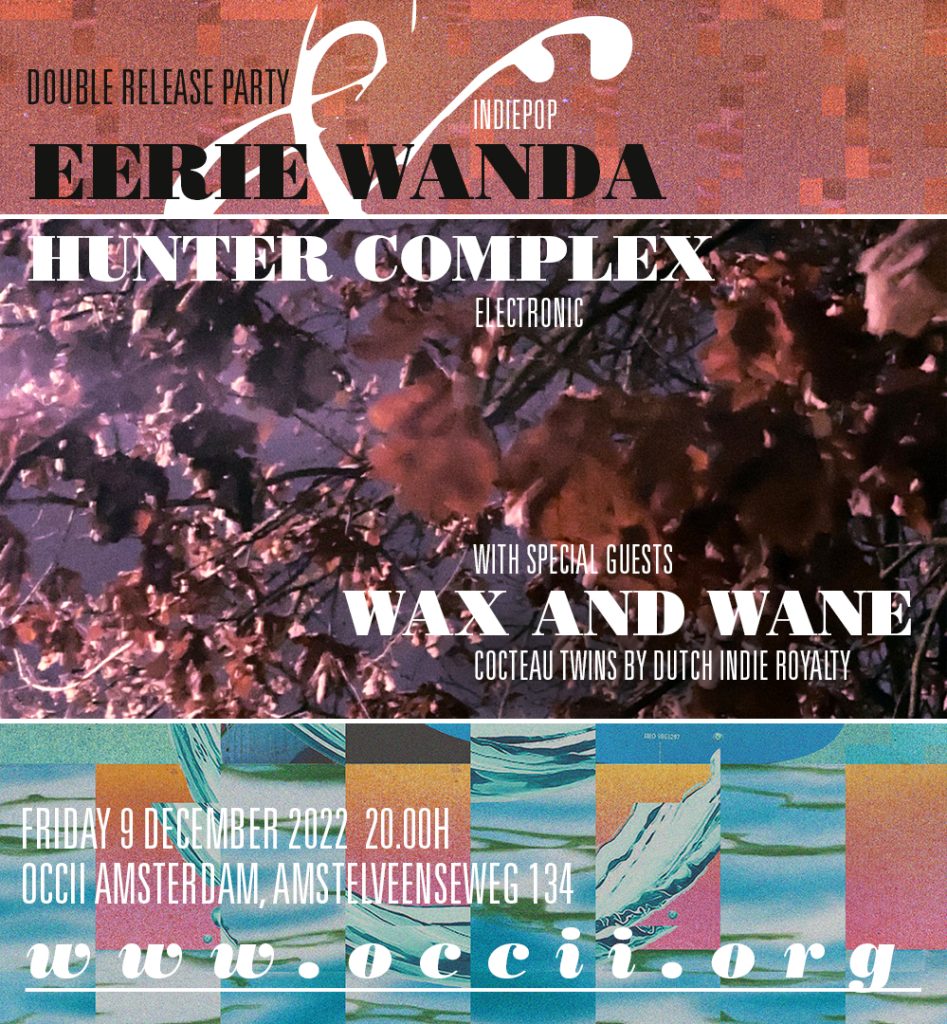 Both Eerie Wanda and Hunter Complex have new albums out and they celebrate that at the OCCII with Wax and Wane, an all-star indie band that plays music by Cocteau Twins.

Dutch/Croatian artist Eerie Wanda just released ‘Internal Radio’, her third album and second for the Joyful Noise label. Visual artist and musician Marina Tadic writes the songs and is joined by her partner, Adam Harding (Dumb Numbers, Kidbug), and Kramer (Galaxie 500, Unrest, Ween, Daniel Johnston). The new album was recorded at home in The Netherlands. On these 11 songs, it’s clear that Tadic is becoming the artist she wants to be, working through some things, and even exorcizing a few demons. Whereas her previous albums leaned toward upbeat, guitar-focused pop, ‘Internal Radio’ sounds like a more experimental, otherworldly, serious grown-up affair, venturing into sensitive emotional territory. The intimate, personal songs here reflect the solitude many of us have felt these past few years, recalling artists such as Lida Husik and Edith Frost.

Tadic, who started writing songs at age 14 when she got her first guitar, takes an intuitive approach to making music. On ‘Internal Radio’ she wanted to tune in to her deepest feelings and create something which sounded new to her. Allowing herself to confront some darker emotions, previously pushed aside, yielded many of the songs. She’s also into paranormal phenomena like near death experiences, telepathy, and UFO’s, and those things impact the music she makes as well. Without a full band and instead using haunting, ethereal spaces, she has really found her ‘weird inner world.’ This album is more personal because it draws on her own experience, while on previous material she relied more on storytelling. She also wanted to experiment more with sounds for ‘Internal Radio’, giving each individual track a custom sound. Tadic is also becoming more confident in knowing and creating what she wants, trusting her gut when it comes to what things sound like.

Hunter Complex is the moniker of Dutch artist Lars Meijer. In the late eighties he began releasing rudimentary synth music on handmade tapes, before turning to lo-fi pop as Larz in 1994, resulting in two albums on the Californian cult label Blackbean and Placenta. Around the turn of the century Meijer released several albums with the improvisational electro-acoustic band Psychon Troopers and electronic music duo Living Ornaments, including music on famous labels like Deathbomb Arc and Skam. Meijer began working as Hunter Complex in 2008. The self-titled debut album came out in 2010 and was influenced by synthpop and new wave bands from the 1980s. Follow-up ‘Heat’ , which was released on Narrominded in 2013, was the last album to feature vocals, but the first featuring the trademark layers of warm and bright digital synths.

Wax and Wane is an all-star indie band that plays music by Cocteau Twins. The band consists of Brenda Bosma (vocals, Spilt Milk), Erik Schumacher (guitar, Apneu), Roald van Oosten (guitar, Caesar), Niek Hofstetter (bass, Subroutine Records) and a drum computer. They started out as an occasional formation for a one-off performance that took place last summer in Vera Groningen. Now they are invited for a reprise by both Marina/Eerie Wanda and Lars/Hunter Complex, both first class fans of the majestic Cocteau Twins. The Scottish shoegaze trio are known for dreamy hits with angelic vocals such as ‘Heaven or Las Vegas’ and ‘Cherry Colored Funk’, but also for their early material that sounds more raw and direct.

EERIE WANDA, HUNTER COMPLEX, WAX & WANE
Bookings are closed for this event. 70 tickets will be sold at the door
Posted in Electronic, Rock