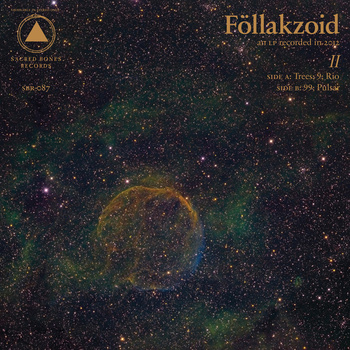 is a chilean based cosmic music band.

Föllakzoid (prounounced foll-ack-zoid) started playing together three years ago in Chile when they were 20 years old. They were an eclectic group as far as musical taste, having dabbled in everything from classic rock to punk. The first time they jammed together they played non- stop without speaking for two hours and were seemingly over taken by a trance without any clear reference point. After they played their first show they began to delve into 60’s German krautrock while cultivating their love of and simultaneous propulsion towards motorik beat.

They recorded their first record a year after they started and also birthed BYM (Blow Your Mind) Records to release this record and others from their burgeoning psych scene in Santiago, Chile. The label’s output is entirely analog using only tape recordings.