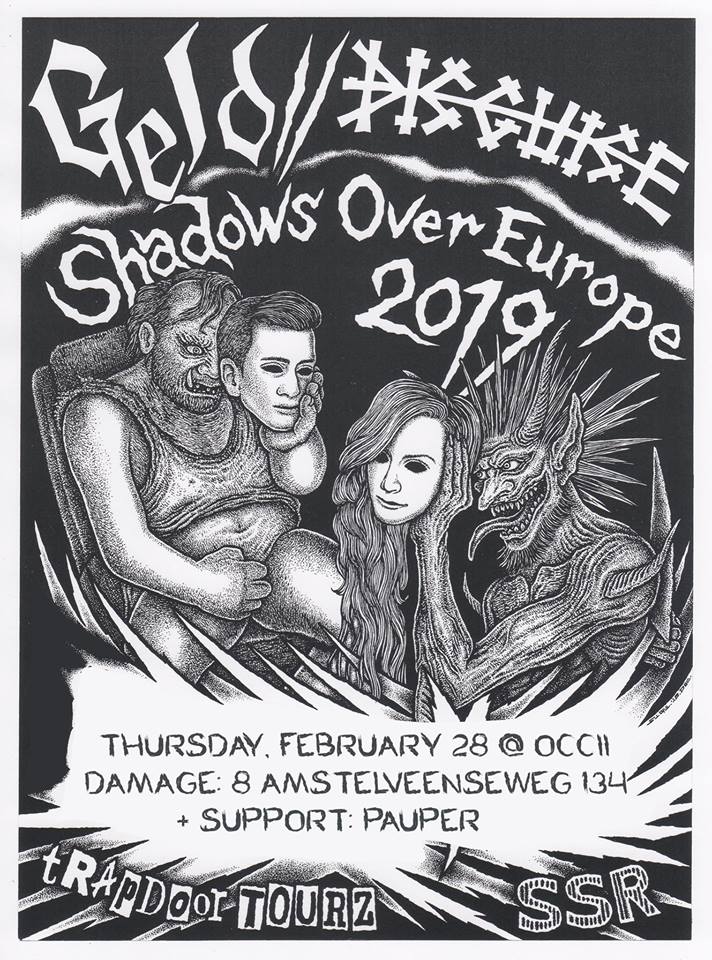 GELD (Melbourne, AUS, Iron Lung Records)
Debut GELD 7″ from Melbourne, Australia. Former members of the one and only KRÖMOSOM as well as newer and weirder Aussie noise punk like Soma Coma. A raw hardcore tempest that brings to mind a cool mix of fast USHC influences and the psychedelic freakout of bands like the Swankys. LP dropping on Iron Lung Records later this year.
https://geld.bandcamp.com/
https://youtu.be/CWYgCEbpSh0

DISGUISE (Dublin, IRE, Statick Shock records)
Dublin, like New York or London, is a city whose punk in 2015 matches its vibrancy with its refusal to be defined by one sound. Multiple bands, all with wildly divergent takes on 2015 punk, all unified in their DIY ethic and refusal to compromise. The first 12″ from searing rawpunx Disguise (who also feature 2/3 of Zom and members of Strong Boys) continues where their System Shock 7″ left off, slamming together the lithe turmoil of Gloom, the monstrous purpose of Bastard, the ugly burn of Crude SS into a violent driving gunk, like Florida’s Mauser or Australia’s Kromosom, taking that Scandi-Japanese rawpunk axis and stretching it out to their own corner of the globe.

Built on a relentless sinister thrum, a taut propulsive clatter, Disguise explode with scalding fury in the screaming guitars and tortured barks and roars echoing out of the radioactive slurry. From Constant Victim pure vitriol rolling into Signs of the Future’s noisestomp groove, to Depleted Uranium heady crash and BBFM’s broken fade, this is ferocious hardcore punk, worked til its end.
https://disguise.bandcamp.com/

“This is so raw and filthy that it is exploding your hearing and so intense heavy ! This is how it should sound more !”
“Disguise rules ! ”

PAUPER (Amsterdam)
Years of mental preparation, meditation, build up frustration, and a lot of food stamps. Everybody told them they were wasting their lives doing nothing. But this year when the stars were in the perfect alignment, the doomsday clock was set to 2 minutes to midnight and the snow owl sang there full moon song, they knew it was time. There notes fibrate like a smash of the hammer from Thor. Things begin to hover in mid-air, animals will start to shake their bodies and dance in weird circles, beer bottles magically disappear right before your eyes. PAUPER isn’t just a band its one of natures biggest achievements and mysteries. Your brain chemistry will never be the same again after seeing them.