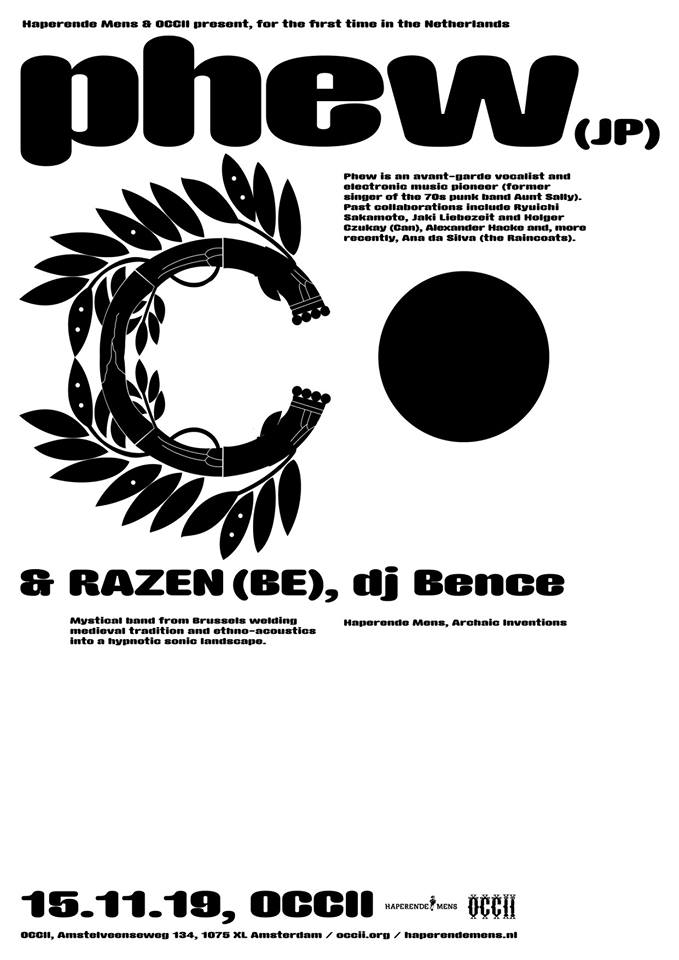 On November 15th Haperende Mens and OCCII are proud to present Japanese avant-garde vocalist and female electronic music pioneer Phew (who is coming to The Netherlands for the first time!) and Brussels based group RAZEN who are celebrating their 10 years anniversary.

Phew was the queen of the Osaka punk scene at the end of the 70’s as avant-garde vocalist for the cult-band Aunt Sally. She also recorded a single with Ryuichi Sakamoto (YMO) and made her highly appraised debut album “Phew” in 1981 with members of Can (Jaki Liebezeit and Holger Czukay, produced by Conny Plank). Phew created numerous albums, on which sometimes collaborations were included with members of DAF and Alexander Hacke (Einstürzende Neubauten) and electronic music pioneer Dieter Moebius. She has never stopped to push her musical creativity into new realms and has been receiving increased attention through the rediscovery of her music as well as through her new musical projects in recent years.

Phew has recently been collaborating with Ana Da Silva of legendary British post-punk band The Raincoats as well as with contemporary sound-composers like Oren Ambarchi and Jim O’Rourke. She uses a unique experimental style where her electronics and intimate vocalization create otherworldly tone-colours and different sonic dimensions that are both alienating and harmonious at the same time.

The Brussels based group Razen, founded by Brecht Ameel and Kim Delcour, celebrates its 10 years anniversary. Their latest album Ayîk Adhîsta, Adhîsta Ayîk that came out recently on the adventurous (K-RAA-K) label showcases the components of their own lore resurface in wholly inventive forms that weld medieval tradition, ethno-acoustic elements and otherworldly vibrations into a hypnotic sonic landscape. Recorded at Saint Agatha church and largely inspired by Carl Jung’s Memories, Dreams, Reflections, Razen embark on a new phase in their trajectory, one that is tinged with the primordial questions and reflections found in states of being and non-being. For this special night at OCCII the band will present uniquely created music pieces that will be presented as an in-situ performance.

DJ BENCE, PHEW, RAZEN
NO PRESALE, TICKETS AT THE DOOR, CAPACITY 250, CASH ONLY AT VENUE
Posted in Featured, Haperende Mens