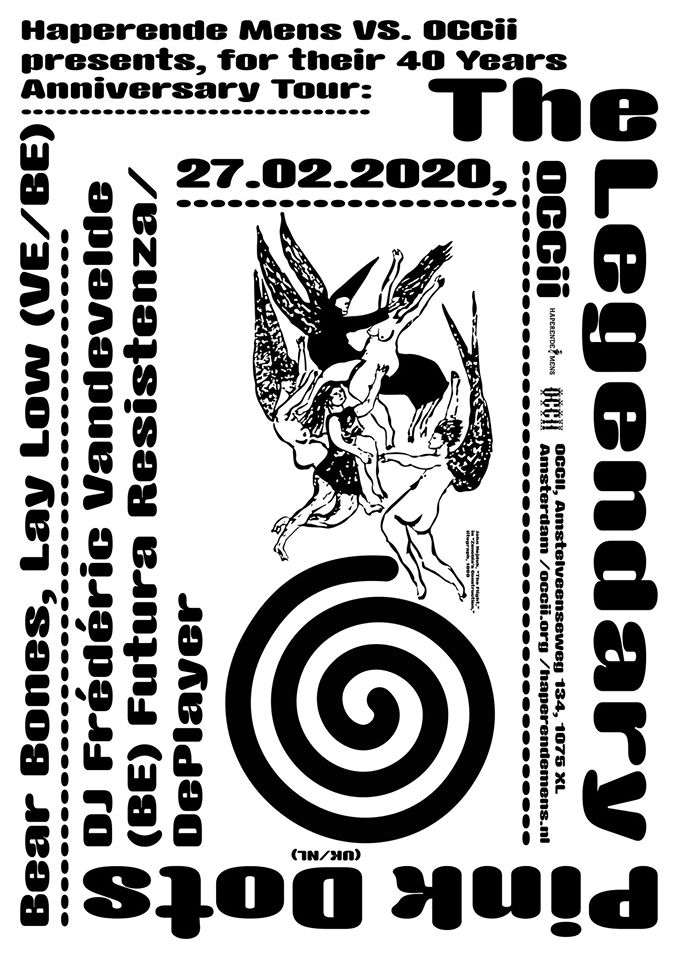 The official and special Haperende Mens vs. OCCII artwork for the upcoming The Legendary Pink Dots, Bear Bones, Lay Low and DJ Frederic Vandevelde (Futura Resistenza) event on February 27th is out thanks to Andrea!

And thanks to Lee Jungmyung (Jung-Lee Type Foundry) for the Impact Nieuw typeface (https://www.jung-lee.nl), which will feature through all current and upcoming HM graphics!

The Legendary Pink Dots are a Netherlands-based band formed in August 1980 in the UK who, although distinctly underground, have been musically influential over the years. The band name was derived from pink dots of nail varnish on the piano in their squat, where founding members Edward and April lived. The band has as its focal point vocalist Edward Ka-Spel, who is, along with Phil “The Silverman” Knight, one of the original remaining members of the band. In the mid eighties the band resettled in the Netherlands, where they still reside today. Apart from Edward and Phil, the line-up has gone through many changes. Members such as Ryan Moore, a Canadian bass player, who joined in 1991 after the recordings of the Last Man to Fly with the Tear Garden (he joined as a session musician), went on to form their own labels and musical projects. See Twilight Circus and M Records. Their music is nothing if not original and it is difficult to categorise, but comparisons may be drawn with bands like Pink Floyd and Can.

Their sound has been described as an amalgamation of psychedelic rock, industrial, synth-pop and avant-garde. They have released over 40 records and continuously tour the world.

Bear Bones, Lay Low is the musical project of the Brussels based Venezuelan musician Ernesto Gonzalez. Longer than a decade has Gonzales been making a great amount of music in which experiment, unexpected soundlayers, ecstasy and ritual come together. Through the combination of electronic and acoustic sounds an unknown world of dystropical nature unfolds. Repetitive kosmische and experimental sounds build up to trance-like heights. His concerts are never the same and open up new worlds to the listener time after time.

Gonzales oeuvre spans over more than 50 different releases plus another uncountable number of collaborations. Over the years he has done hundreds of shows and has been praised both in the underground and the upperground of the contemporary music culture. A true pioneer in the electronic music landscape of the last decade and one of the most active experimental musicians of his generation.

Frederic Vandevelde is a music explorer with a long history in the Flemish underground music scene. He has been organizing numerous concerts to this day, (nowadays at De Player in Rotterdam) and finally he started his own music label this year called Futura Resistenza. Expect unexpected and adventurous tunes before, in-between and after the concerts. Maybe he’ll bring some copies of the first Futura Resistenza releases so don’t miss out! 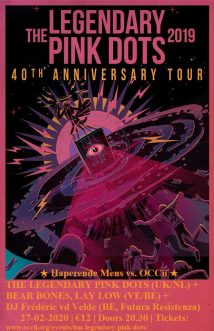 BEAR BONES LAY LOW, DJ Frédéric van de Velde, THE LEGENDARY PINK DOTS
Bookings are closed for this event. 150 tickets will be sold at the door