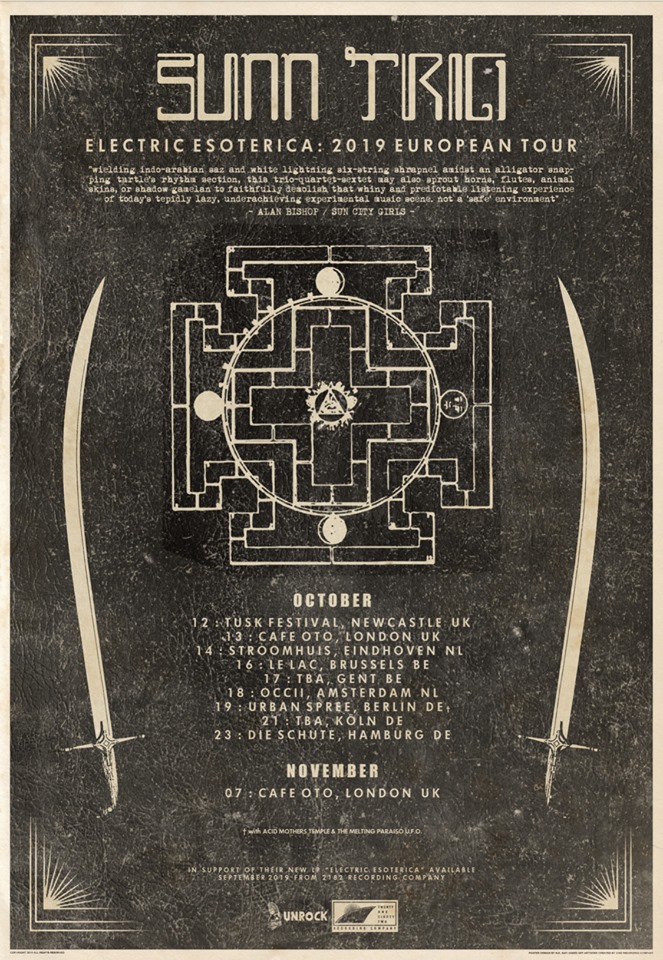 Spill Gold is a psychedelic duo that unwinds vivid, spiralling stories with their eerie yet persistent songs and brings listeners into a trance-like state. They saw the sirens– and just like that, as they were sitting in the rain, daydreaming on a foggy mountain trip with Japhy Ryder, witnessed the rising of an unusual new moon. A revelation that would not be contained, an unrelenting vision that demanded to be shared.

Spill Gold invites you to lean in to your unrelenting visions and pour out the best you’ve got, streaming and unrestrained. Let it out and get drenched bathing in it.

“One of the most surprising things that has happened in DIY music over the last few years has been the re-emergence of the cassette tape. Far less expensive to produce than vinyl, it has been the go to medium of many bands who are starting out and want to have something physical to sell at their gigs. This has happened to such an extent that I have bought myself a tape deck… at the same charity shop where I donated my previous one a decade earlier.”

Some very kind words about Volumes 1 and 2 over at The Fragmented Flâneur! “The combination of the original lo-fi material placed through a prism of a contemporary mind gives these albums a unique feel which in many ways is quite difficult grasp…never mind explain.”

SUNN TRIO (Phoenix, Arizona US)
Described as deep spirited, Arabic-music-tinged free jazz-punk and harsh exotica, Sunn Trio’s ever-evolving ensemble digests a number of genres, spitting them back out in creative destruction. Carrying on a long tradition of sun-beaten Phoenix punk, Sunn Trio evokes the sweltering and hallucinatory Arizona desert. Echoes of Sonny Sharrock, John McLaughlin, and Sir Richard Bishop can be heard in Joel Robinson’s fiery blurs of guitar. Imagine the Thinking Fellers Union Local 282 in full force, echoing from behind a curtain of bitter haze. Founded by Robinson in 2010, the ever-changing band has been constantly recording and releasing material, with a recent LP, Fayrus, on Germany’s Unrock Records.

Listening to Sunn Trio’s “Mukhbir” feels like falling down a rabbit hole. It’s a dizzying and inventive track, lacing together cocktail jazz drums with honking horns and Arabic textures. The song sounds like Angelo Badalamenti doing world music. You could almost imagine it soundtracking a scene in Twin Peaks where The Black Lodge’s Red Room merges with an Arabian bazaar. Sinister dwarves, camels, blasting sands, silk draperies undulating in the dark: You can hear all these things in “Mukhbir.”

“Mukhbir” is the sixth track on Sunn Trio’s latest album, Fayrus . After releasing a beautiful, meditative series of improvised gamelan recordings earlier this year, Sunn Trio dropped an album of wild jazz-rock that picks up where they left off on their self-titled 2017 record. Headed by Joel Robinson, the local group melds together jazz, avant-garde rock, world music, noise, and improvisation to create an exotic and propulsive sound.
“Improv has always been one of the driving forces behind the group,” Robinson says. “There’s nothing like it – it’s almost a metaphysical state.”

Sunn Trio’s music harks back to that period in the 20th century when North African music and culture fascinated the Western world. Picture Brian Jones with the Master Musicians of Jajouka, William Burroughs and Brion Gysin tripping out on hashish, and brilliant Paul Bowles novels like The Sheltering Sky, and you’ve got a good grasp on the wavelength Sunn Trio is tapping into.

But the group is also tapping into another current: Phoenix’s past punk history. For starters, one of the band members is Elmo Kirkwood (whose father and uncle are the driving forces behind sun-baked Arizona punk OGs the Meat Puppets). Sunn Trio’s interest in world music also puts them in conversation with The Sun City Girls, who were so obsessed with exploring other musical styles and modalities that one of their own ended up starting his own world music label.

Robinson is quick to point out, though, that SCG aren’t a big influence on the group: “People always keep bringing up these Sun City Girls – I have no idea who these guys are.”

But Robinson and his group do take inspiration from the freewheeling ambition and style the old Arizona punk scene. “Those early Placebo Records comps had everything on them: industrial music, pure noise, prog rock, hardcore punk, free jazz. Just a totality of music,” Robinson marvels. “The Phoenix punk community was probably more progressive than the other punk rock scenes that were going on back then because they did whatever the hell they wanted to do. And I think that’s what punk rock is – I don’t think it’s this over-beaten hardcore thing. It’s the idea of doing whatever the hell it is that you want to do.”

While Fayrus doesn’t sound like a punk record, it’s animated by that doing-whatever-the-hell-you-want spirit. Tape experiments play alongside jazz freakouts, splashes of gamelan, and sputtering electronics. The record can shift from moments of quiet contemplation to sensory overload.

Part of what makes Fayrus (and the band’s other records) so unpredictable is how they use both traditional composition methods and improvisation to piece their songs together. “For us, we keep going back to that improv aspect: taking a million different ways,” Robinson says.

Just when you think you know where Sunn Trio is going in a song, they find a way to trip you up and out. Listening to them is like chasing after a mirage in the desert: You’re bound to find something very different at the end of your journey.`

Sunn Trio further explores and refines their unique brand of Arabian-informed raw drone-rock on Fayrus, their second studio album after last year’s self-titled LP. Looking at the liner notes, I can’t help be reminded of the hilariously overstated credits included with Sun City Girls’ Torch of the Mystics, which included, among other things, ‘algebraic percussion,’ ‘ambient and terminally fatal ear poison,’ ‘blood of the moon lute,’ and ‘forward subliminal messages.’ The influence of the Girls on Sunn Trio’s distinct style is undeniable, but as far as I could tell every instrument listed was used on this ceaselessly eclectic record, from gongs and tamburas to shortwave radios and Gameboys. “Shayatin” and “Al-Rijal Al-Khafiya” start things off with a fiery bang, threading hypnotic harmonic minor unison riffs into fluid drumming that seems half rhythmic and half freely improvised. The next two tracks venture into some darker, electronics-heavy soundscapes, which only makes the furious loose grooves of Al-Ghayb even more incendiary. As if Fayrus wasn’t diverse enough already, “Mukhbir” takes us into swinging bebop territory, with saxophone solos and walking bass gradually being drowned out by radio interference and dissonance. At every instant on this album, every performer seems perfectly in sync with and aware of each other, no matter how disparate their playing is, and it’s this unity that keeps the ecstatically overstuffed LP from falling apart at the seams.

Phoenix, Arizona’s Sunn Trio has provided us with fantastic music in the past, in the form of their self-titled free jazz debut and Bali Kratom, their Gamelan jazz experiment. Both were quite amazing in their very own rights, and so is their newest offering: فايروس (Fayrus). As the name suggests, the band looks towards the middle east for inspiration, and that comes with the scales traditionally associated with this region’s music as well as folk songs and instruments. Fayrus is mystical and somewhat magical. It sometimes recall the works of Russian group uSSSy, but mostly is remarkably unique. The delivery is pretty varied as well: going from the fusion jazz to the more atmospheric pieces. It’s a fun album to add to your library!