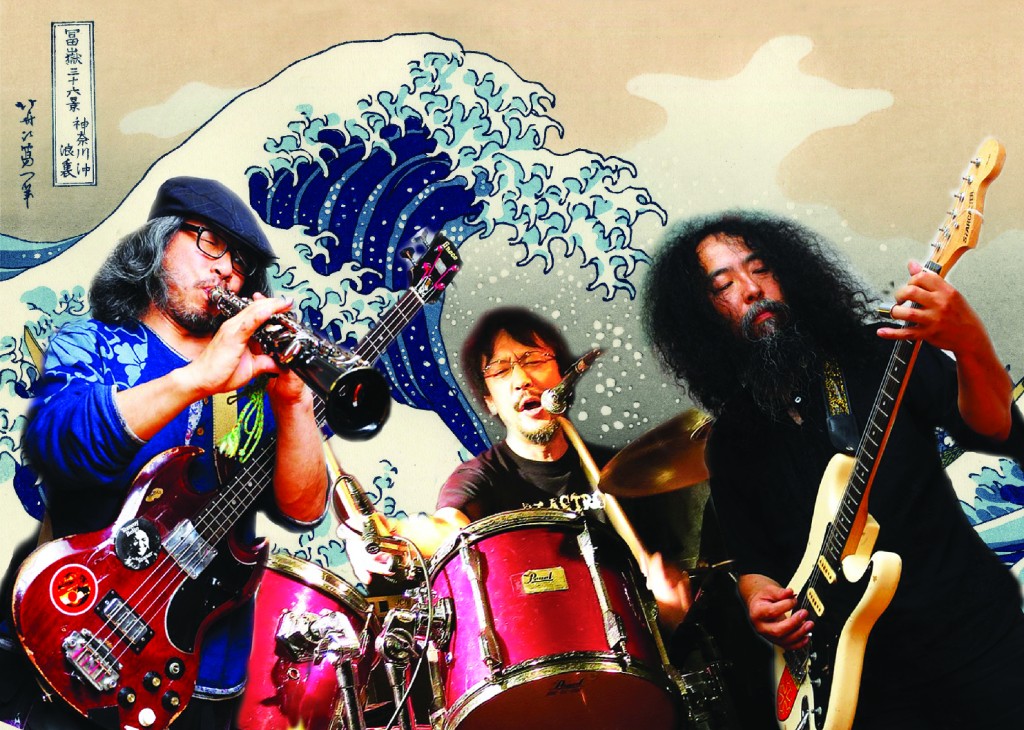 The Japanese New Music Festival is a showcase tour in which the trio of Tatsuya Yoshida (Ruins), Atsushi Tsuyama (Acid Mothers Temple), and Makoto Kawabata (Acid Mothers Temple) perform as multiple different units. The tour will return to Europe this autumn, with our three heroes performing as 8 separate groups. The groups mix and deconstruct all kinds of music from psychedelic rock, prog, jazz, classical to contemporary composition, experimental, and ethnic music. Their sound is unashamedly uncategorizable, with undercurrents of Frank Zappa and his belief that humour was an essential part of music. Each of the members brings a rich wealth of musical learning, knowledge and experience. The line-up for this year’s tour will be: Ruins Alone, Acid Mothers Temple SWR, Akaten, Zoffy, Zubi Zuva X, Psyche Bugyo, Atsushi Tsuyama Solo, Makoto Kawabata Solo.

Tsuyama is best known for his monster bass in Acid Mothers Temple, but he also has amazing technique of guitar and vocal. his  He has travelled around the world and accumulated the traditional styles of guitars/vocals in europe and asia. he adds his own interpretations and lyrical sense to create a beautiful but odd “fake traditional” musical world. recently he developed a new figure called “prog.rock > blues-ization plan”. he dismantle the masterpiece of progressive rock, and restructure it as an impromptu blues.
http://www.youtube.com/watch?v=CTcsOMBLcHU

Kawabata Makoto is best known for his speed-demon noise-fuzz guitar in Acid Mothers Temple, but he is also widely active as an unparalleled drone guitarist. Drawing upon a huge reservoir of original techniques including metal glissando and bow-work that can summon up the sound of a string ensemble or orchestra, his work in this area cannot be simply categorized as minimal, drone or experimental. You’ll find it hard to believe that a single guitar can create sonic worlds of such meditative and elegant depth.
http://www.youtube.com/watch?v=9vAzNaI_U2A

Yoshida is one of the most innovative drummer/composer/improviser in Japan’s new music scene. pioneer of Drum & Bass duo RUINS was founded by Yoshida in ’85 . Tunes are complicated and mysterious, and songs are sung in the language of their own invention. It’s high-tension, wild, heavy, speedy, acute, and powerful tremendous ensemble never sounds like they are only two players. now RUINS had no bassist and currently he has been playing as RUINS ALONE. playing RUINS songs with sampling bass.
http://www.youtube.com/watch?v=KlJZeJqwisg

Eccentric poly-rhythmic a cappella ensemble. It covers from Gregorian chant to ethnic music, to do-wop to hardcore screaming, heavily using irregular rhythms and polyrhythm. All sorts of ideas and aberrant musicality overturn the image of a cappella. their totally meaningless lyrics and desperate performances throw the audiences into the abyss of the laughter and admiration. it makes the concept of “singing ability”nonsense.
http://www.youtube.com/watch?v=4jF3xBM2RxM

Formed in 1995 with the motto of “irresponsibleness” and “perfunctoriness.” They easily free themselves from the spell of the traditional seriousness of the art. Using daily commodities like scissors, toothbrush, zipper, camera, and plastic bottle as percussions, and shouting their brand names over and over as the “songs,” the show is performed under the concept of low cost and maximum sound effect. AKATEN is the experimental convenience store punk band that provides the sound images of cheap and simple daily lives.
http://www.youtube.com/watch?v=UWW6n1hX-mA

Formed in 1998. Zoffy’s music hints both at the members’ deep musical knowledge via their improvised performances of troubadour music and European trad, and also at their deep love for rock via their destructivist covers of classic rock songs, that no longer sounds like anything but ZOFFY. The group believes that humor is essential in music, and their unprecedented performances stray far from the beaten track. Is this the Ultima Thule that rock music has long been aiming for?
http://www.youtube.com/watch?v=xw6mmmVZNW8
http://www.youtube.com/watch?v=3YR3Deik4ik

Atsushi Tsuyama’s blend of two of his favourite things: Japanese samurai and ninja costume dramas, and British rock (mid 60s to mid 70s). The lyrics deal with themes from these dramas with typical Tsuyama humour, while the music is hardcore, authentic British rock tropes from the golden age – an ultimate, ultra-personal rock fusion of east and west! Special line-up for this tour including Tatsuya Yoshida on drums and Makoto Kawabata on bass.
http://www.youtube.com/watch?v=6cj7f-x-0UI

Acid Mothers Temple  have rapidly become acclaimed as the greatest, most extreme trip psychedelic group in the world. Releases have appeared on labels around the world at an amazing pace, and the magnificence of their live performances is already being whispered of as legendary. SWR is the AMT Family’s most powerful battle-formation yet. featuring Tsuyama and Kawabata from the original AMT and Yoshida from Ruins.  their crushingly acute freakout sound will pulverize the world’s legions of wannabe psych groups.
http://www.youtube.com/watch?v=5BEt5ZUQq8A