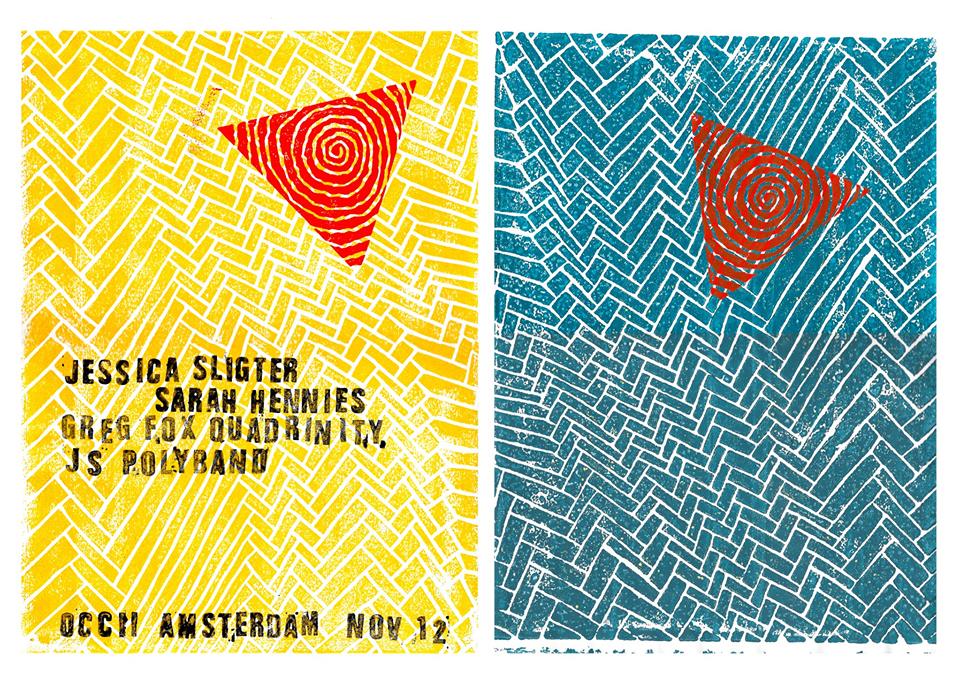 Jessica Sligter is a Dutch-Norwegian artist and producer who mixes crooner & experimental musics in a ‘noir’ conceptual space. Her september release ‘Polycrisis:yes!’ mixes vocals, abstract electronics, and synth in a futuristic imagining of collapsed European identity.

Sarah Hennies, percussionist and composer extraordinaire from the USA, joins Sligter on her European release tour. Her work utilizes an often grueling, endurance-based performance practice in a subversive examination of psychoacoustics, queer identity, and performance art.

The PolyBand, led by Jasper Stadhouders since April 2015, is built around an ever expanding pool of musicians and performers. The instrumentation is flexible, but has multiple guitars, drums and bass as its core. It’s often augmented by accordion, bagpipes, keyboards, horns and dance.

The use of complex, multi-layered polyrhythmic cycles and polytonal environments creates a multifaceted and intricate sound picture that plays with the expectations, desires and memories of both the performers and audience. Relatively small, subtle changes in movement and sound are precisely timed to create great impact. Duration and repetition are two key elements.

The composition is set up in a way that it can be played by any number of performers. Each performer has a specific freedom within the composition. Various cues are assigned to all players which leads to unexpected shifts and changes.

The goal of this is to attempt a social music where each member is equal and which defies ego and individualism. All faces in the same direction.
The PolyBand is set up in a symmetrical way, most instruments are either doubled or tripled, to achieve an acoustic stereo sensation.
The PolyBand searches for a music which seems timeless and instantly recognizable while simultaneously expresses the urgency and uniqueness of the here and now.

We are excited to welcome the master drummer Greg Fox (Liturgy) for his latest project, Greg Fox Quadrinity, which expands his solo work to a live quartet featuring himself on drums, Michael Beharie on guitar, Maria Grand on saxophone, and Justin Frye on double bass.