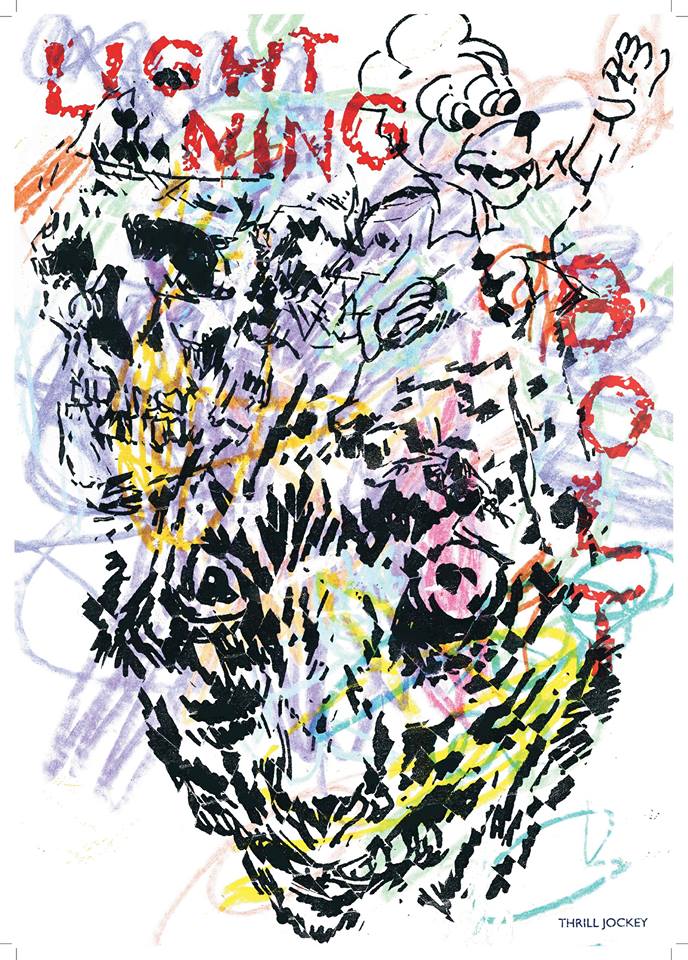 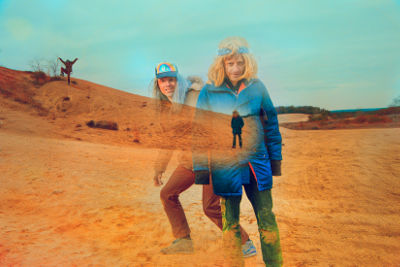 For a long time, Lightning Bolt, the legendary cult noise rock duo from Providence, Rhode Island, refused to perform onstage. Instead, drummer Brian Chippendale and bassist Brian Gibson would set up in the middle of the floor, encircled by a sweaty, frenzied throng. Chippendale wore a mottled lucha libre-esque mask of his own design that left him looking like a fanciful, slightly disturbed approximation of a human. The front lines were the best place to experience the show, a violent sonic onslaught that provoked an equal and opposite reaction from the audience. Sometimes, it was all Chippendale and Gibson could do to keep playing as limbs flailed against their instruments and bodies threatened to cut off their access to air.

Over the course of 20 years, Lightning Bolt has become, if not exactly popular, fairly notorious. In 2011, the band collaborated on an EP with The Flaming Lips, and in 2008 Chippendale provided drums to Bjork’s single “Nattura.” These days, the crowds at Lightning Bolt shows are too big to permit the kind of wild, intimate floor performance that helped the band make its name. Lightning Bolt’s upcoming tour in support of the release this week of their seventh full-length LP, “Fantasy Empire,” will occur in medium-sized venues and on stages. They play the Sinclair in Cambridge on May 17.

“The floor is a great place to be. The eternal basement show. But compromise is the tool of the adult perhaps,” said Chippendale in an email. “We are just trying to do what makes sense to have and deliver the best experience in any situation. Which is really why we went to the floor in the beginning. Just trying to make it all work well. I don’t mind the stage. The additional spotlight actually makes me play crazier. There’s no excuse like ‘There are five kids on top of me and there’s no oxygen for me to breathe down in the crowd.’”

Lightning Bolt emerged in the mid 1990s, a product of the burgeoning DIY art scene centered around Fort Thunder, a loft space in an enormous old mill building in Providence that housed a group of musicians, artists, tinkerers and cartoonists, many of whom had studied at the Rhode Island School of Design (which also happens to be where Chippendale and Gibson met.) Fort Thunder was famous for its surreal decor, which covered practically every inch of the space: tangles of bicycle parts, screen-printed posters, hand-drawn comics, and all manner of radiant detritus, pasted and stapled and hung together in one huge, DayGlo collage. The place even earned a write-up in the interior design magazine Nest.

But Fort Thunder was perhaps best known as an underground performance space, and became the focal point for an experimental local music scene and a popular stop on the road for like-minded bands. Thanks to the building’s relative isolation, the shows were reliably noisy and wild. Thanks to its proprietors’ artistic proclivities, the Fort also hosted Halloween mazes and masked wrestlers duking it out in cage matches. (On YouTube, you can watch a man wearing a mattress get pummeled by a guy in a cape.) Fort Thunder, which was shuttered in 2001 and replaced by a supermarket, was radical and creative and fantastically anti-establishment. In many ways, Lightning Bolt was its musical equivalent.

Lightning Bolt’s music skims along the edges of metal and punk, a flair for the theatrical infused by a taste for riotous disorder. Gibson runs his bass through enough effects to render it thoroughly un-bass-like, the sounds ranging from a nerve-deadening thunder to a stuttering static to an eardrum-piercing squall. Lightning Bolt are a riff-centric band, and they tend to run headlong into an idea—a dramatic heavy metal progression, for example—and push it to its extreme. Gibson’s clear, long phrases act as an anchor while Chippendale maintains a frenetic, violent assault on the drums. At times, the two seem to come nearly unhinged, twin planets spinning furiously around each other in a desperate fight against gravity. Chippendale’s voice battles valiantly to make itself heard, a lone howl swept up in an invigorating chaos.

“Words are like the kid in the back of the car,” he explains. “The drums and bass drive it and the lyrics are along for the ride. Sometimes they are a cheering section for me to keep drumming. Like ‘Come on!’ ‘Faster!’—almost like that. Other times they are literal, like on the recording of ‘Horsepower,’ there is a narrative. But live the specifics go out the window. It’s about delivering an emotional sound so I personally, and maybe others, can get into the spirit of the song. And the lyrics, or the voice, are there to remind you that there are humans involved in this music, as inhuman as they may sound at times. Or at least living creatures involved in making it.”

Lightning Bolt’s music is not meant to be easy. For the uninitiated, the first listen is usually overwhelming. A second is apt to inspire awe: Chippendale and Gibson are impressive not merely for their force, but for the level of complexity that they bring to deceptively simple motifs. By the third or fourth repetition, the music shifts into place. Acclimate to the onslaught, and you will discover that it is both ordered and purposeful. Chippendale and Gibson don’t exactly upend sonic expectations—they are enamored with patterns—but the structure permits catharsis to bloom in the most satisfying way. Their songs are intense, sense-stupefying jolts of pleasure—or is it pain?

In contrast to its predecessors, “Fantasy Empire” benefits from studio tactics long eschewed by the band, who favored a lo-fi aesthetic.

“This is our first case of really getting into what the studio has to offer, like actually separating the sounds,” says Chippendale. “We’ve never had separation before, always just playing in a heap in the middle of the studio like we play live. So having the bass rig in a different room, now you could really get into each snare hit or bass tone or whatever and sculpt things. A clearer approach. It made us hear things differently and probably took us in the direction of focusing on songs being well-conceived and clear. A little less riding on just the chaos. The studio brings out the nitpicking.”

If Lightning Bolt’s fastidiousness seems at odds with their ferocious demeanor, it helps to remember the band’s origins. Fort Thunder provided a place for artists to live cheaply, find inspiration, and have fun. But those were mere ingredients for the Fort’s overarching goal: to produce art. Diligence and creative ambition are as crucial to Lightning Bolt’s process as the rebelliousness that brought the group into being.

Paradoxically (though not surprisingly, for anyone who understands the challenges of capturing sound), the band’s newfound appreciation for recording studio convention has helped them produce their most sonically uncompromising album yet. On “Fantasy Empire,” each smack of the tom and each smash of the cymbal is clear and brutal, like a hammer landing on an anvil.

Chippendale’s lyrics are as impossible to discern as ever. (This may have something to do with the fact that his vocal mic lives inside his mask.) But that is as it should be. The enhanced production on “Fantasy Empire” does not magnify Lighting Bolt so much as depict them in bright, ultra-saturated color, the turbulence at their core intact.

“As a player, to be able to focus on something for a long time, you just get such an enhanced understanding of the action of it,” says Chippendale. “So enhanced you don’t really understand what your understanding is, but other people can see it or hear it in the playing. It’s like watching an actor do a good job so that the acting is gone. We just aim to be players that dissolve into the music.”

LUKAS SIMONIS (Electric Guitar, electronics)
Is one of the founders of WORM, Rotterdam (www.worm.org). He organises and produces radio, concerts, cd’s, performing projects and writing, sometimes as KLANGENDUM, a new foundation that promotes soundart and radio-art, sometimes still under the WORM-umbrella, sometimes in cooperation with others (oa. The Radia Network, Poetry International, Soundtrackcity, Vrooom, etc.) He started out as a ‘unconventional’ rock musician, playing in bands like Trespassers W and Dull Schicksal. The last few years he turned more and more to electronic, improvised music and sound art, allthough he still has a weak spot for his version of rock, and he is playing with people like Candlesnuffer, Anne la Berge, Pierre Bastien, GW Sok, Henk Bakker and the Bohman Brothers. Other groups and projects include Coolhaven (electro performance trash), Perfect Vacuum, Vril (songs), Static Tics (electronics) and Kruk (improv perfo). Since the year 2000 Simonis got more involved in Soundart and Radio making, in different constellations, cooperating with Artists, Journalists and radiomakers. Other activities; filmmusic, writing (ao. radioplays), singing in the rain.