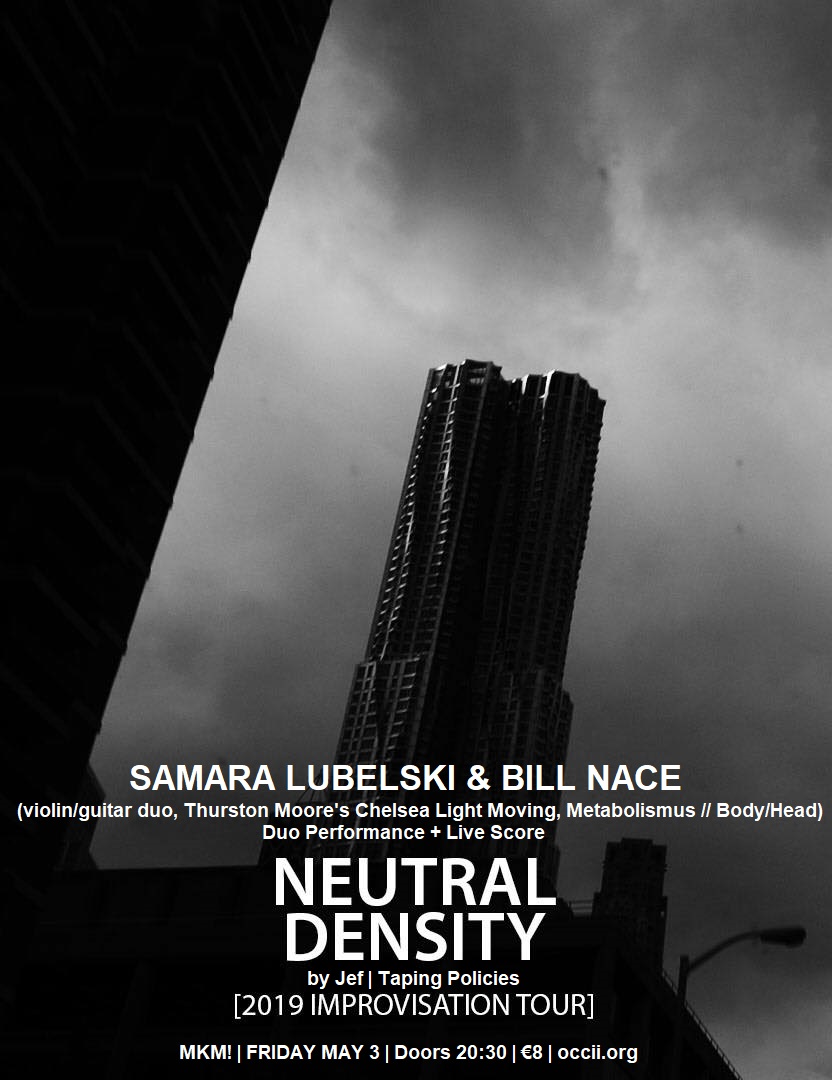 SAMARA LUBELSKI & BILL NACE (US)
guitar/violin duo
Bill Nace (guitar) and Samara Lubelski (violin) are longtime Yankee improvisers. Their resumes include, but are not limited to, Hall of Fame, Body/Head, Thurston Moore, Metabolismus, Vampire Belt, Tower Recordings, and dozens of one-off collaborations as well as copious solo endeavors. We expect good things from this meeting! 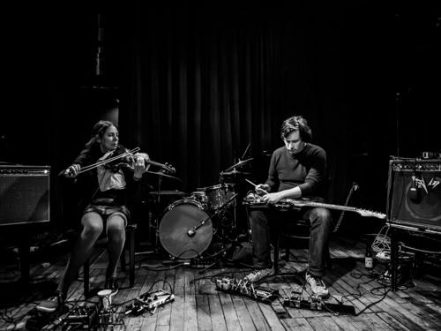 Bill Nace is an artist and musician based in Philadelphia. He has collaborated with an extraordinary range of musicians, including Michael Morley, Mats Gustafsson, Joe McPhee, Chris Corsano, Steve Baczkowski, Jooklo Duo, Chris Cooper, John Truscinski, Thurston Moore, Greg Kelley, Jake Meginsky, Jessica Rylan, Paul Flaherty, Wally Shoup, and Kim Gordon, with whom he regularly plays as one half of the duo Body/Head. They recently The Switch on Matador. He has been a featured musician in festivals such as ATP (curated by Jim Jarmusch and held in Monticello, NY), Colour Out of Space(Brighton, UK), Supersonic Festival (Birmingham, UK), International Festival Musique Actuelle (Victoriaville, QC), and Homegrown (Boston, MA). He has performed in a wide variety of venues, running the gamut from the Musee d’Art Contemporain (Strasbourg, France) to The Stone (NYC) to Bennington College (Vermont). Nace’s range has been described as ” veering from sculptural, almost Remko-Scha-esque chime to Loren Connors-style elegance in only a few short moves.” (Mimaroglu Music, 2010). Recordings can be found on Ecstatic Peace (Northampton, MA), Ultra Eczema (Belgium), Holidays (Italy), 8mm (Italy), Throne Heap (VA), HP Cycle (Toronto, ON), as well as on Nace’s own label Open Mouth.

Samara Lubelski, based in New York City, and often in S. Germany, is best known as a solo artist with nine full-length releases, but she has also been involved in various art-music provocations – Hall of Fame, The Tower Recordings, and MV and EE. Her first solo outing, 1997’s In the Valley (Child of Microtones/Eclipse) was a dense exploration of drones and resonance in experimental string music. Lubelski followed this in 2004 with a full-band recording of lush psychedelic folk-rock for The Fleeting Skies (Social Registry/De Stijl), and has since released Spectacular Of Passages (2005), Parallel Suns (2007), Future Slip (2009), Wavelength (2012), The Gilded Raid (2016), Flickers At The Station (Drawing Room Records/2018), a second improvised/solo violin record, String Cycle, released by Ultra Eczema in 2014, and various singles and cassettes. She has studio engineered records for Double Leopards, Sightings, and Mouthus, amongst others. Current projects include numerous live shows and tours, three lp releases from an improvising duo with Marcia Bassett, a long-standing collaboration with S. German collective Metabolismus, and has played violin on Thurston Moore’s solo records Trees Outside The Academy, and Demolished Thoughts, and recorded and toured with his band Chelsea Light Moving. The duo with Bill Nace released an improvised, deep journey LP on Nace’s label, Open Mouth (Relative Pitch/CD), in 2018, and they will tour Western Europe in May of 2019.

++
Amsterdam based musician and trained drummer Sietse van Erve (Orphax) was introduced to electronic music in the early nineties. After playing around with tracker software for a couple of years, he eventually recorded his first more serious attempts of music with beats and melodies in 1998, though soon lost interest in both these.
He started researching new sounds and new ways of working – always with an organic touch, often incorporating sounds that would be regarded by others as errors or mistakes. Considering life isn’t without errors either. During this search, he found his way into drone and microtonal music. As a result in his most recent work, time and spatiality become more important factors. The goal of the music is for the listener to lose the sense of time and place.
Live this is combined with room for improvisation. This way of working results often in an organic form of drone and minimal music.

He has released over 50 releases, as Download, CD-R, Tapes, CD’s and Vinyl, on various labels, as well as self-released online since he started working on music. This includes collaborations with Machinefabriek and Martijn Comes. Furthermore, he contributed to many remix projects including work for Kenneth Kirschner, Martijn Comes, TVO and Chris Dooks among others.
In the past, he has shared the stage with various musicians including Martijn Comes, Jos Smolders, Frans de Waard (Modelbau), Zeno van den Broek, TVO, BJ Nilsen, Philip Jeck and Yann Novak.